I Love You, Daddy: A Review 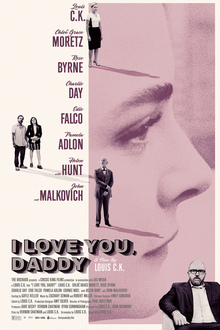 I LOVE YOU, DADDY

Is it serendipity or schadenfreude that I Love You, Daddy came at this moment in time?  This movie, which was set to have a limited release on November 17, 2017, was touted as another work of genius by its writer/director/editor/star: Louis C.K. It would be the next step in his ascendancy, another crowning achievement in his illustrious and critically celebrated career.  It was hoped that it would be a major awards season contender.

Now that is all torn asunder, thanks to Louis C.K.'s excessive love for unwelcome public auto-erotic exercises.

The Orchard, the film distribution company that paid C.K. $5 million for the rights to I Love You, Daddy, pulled it from circulation.  At the moment, it is unknown what fate I Love You, Daddy will have.  No one knows whether it will ever be released or if it will be quietly released on DVD at a later date (read, maybe years from now as part of a C.K. Rehabilitation Tour).

While The Orchard managed to stop I Love You, Daddy from being released to the public, it was too late for them to stop the screeners that studios send out to critics and Academy voting members.  The film that the general public may never get to see ended up being delivered to the homes of reviewers and, I imagine, the convent where Academy member Mother Dolores Hart will have a chance to watch a film created by a serial masturbater.

It was boring, pretentious and worse, not remotely funny.

Whether this is an accurate reflection of C.K. is up to the viewer/reader.

Glen (C.K.) is a highly successful television writer, loaded with awards and praise.  He also has a hard time saying 'no' to his daughter, China (Chloe Grace Morentz), who only has to bat her eyes, wiggle her behind and coo 'Love you, Daddy', to get what she wants.  As much as Glen wants to be firm, he quickly equivocates until ultimately giving in even though just about everyone tells him that she is getting away with murder.

Glen's latest television project is having problems in both his writing and casting, and his loutish friend Ralph (Charlie Day) is not helping.  As much as Glen's business partner Paula (Edie Falco) pushes and yells at him for making her work life impossible, such as having at one point made her hire a helicopter to dangle a traumatized horse over water only to have that 'integral' scene cut, Glen stumbles into getting his own way.  One of those ways is to potentially recast the show with Grace Collin (Rose Byrne), a major movie star who is an admirer of his work.

China is a fan of Grace's, and in a way to build a better father/daughter relationship, Grace invites them both to her home for a party.  At the party is none other than Leslie Goodwin (John Malkovich), a brilliant director who is Glen's idol.  Leslie is also known for a predilection for young girls, at one point China calls him 'a child molester', an accusation that angers Glen. Despite the stories, China finds herself enraptured by Leslie's words, and soon she spends time with him, even going off to France despite Glen's objections.

Whether China and Leslie ever do become lovers is not answered, but the mere idea of 17-year-old China cavorting with 68-year-old Leslie leaves him a mess.  It does not help his growing romantic relationship with Grace, who scoffs at the idea that a minor can't go off with a much older man since she herself did when she was only 15.

After Glen confronts China and to a lesser degree Leslie about this May-December business, China leaves.  Glen ultimately fails to make a television series, while Leslie wins an Emmy for his first foray into television, inspired in part by Glen.  Ralph too manages to win an Emmy thanks to his collaboration with Leslie, and I figure the fact that Ralph was the first person to flat out ask Leslie if he 'f---ed the child' helped.  Glen's ex-girlfriend Maggie (Pamela Aldon) brings a reconciliation between Glen and China, who now sells perfumes.


I have never seen all of Woody Allen's Manhattan, but know enough about it to recognize that I Love You, Daddy shameless cribs from it. The resemblance is essentially skin deep in terms of Paul Koestner's black-and-white cinematography and the Robert Miller/Zachary Seman score.  The cinematography makes one appreciate black-and-white more to where I think it should be used more.

However, the cinematography is the only good thing in I Love You, Daddy.  The music tries too hard to be both ironically sweeping and faux-whimsical in its light jazz inspiration.  The storyline also takes from Manhattan in the relationship between an older man and a younger woman, but I Love You, Daddy is simply no Manhattan.

Again, I look at the film itself, removed from C.K.'s grotesque off-screen behavior, but I Love You, Daddy constantly goads me into reminding me of it.  His script, from a story by him and Vernon Chatman seems to in retrospect take an almost perverse delight in mocking the then-whispers of C.K.'s actions.  Few films seems to be almost a confession and a flaunting of 'getting away with it' as I Love You, Daddy.  From the now-notorious moment where Charlie Day simulates masturbation while talking about Grace to C.K.'s 'feminism actually means this' speech and his 'apology' to all the women of the world, I cannot think of a movie which reveals so much about someone without being a documentary. As a side note, I Love You, Daddy will, if it ever makes it out into the public realm, be studied as a film where a man reveals so much about himself while under the guise of 'art'.  It is not just Louis C.K.'s perverse sex acts that are revealed.  It's his shallow, narcissistic belief in his own 'genius', for we see in Glen the idea that a television writer could be so lauded and applauded that only a cinematic 'genius' like Goodwin could rival him.

It won't be studied for anything else, as I Love You, Daddy is an embarrassment to everyone involved save Malkovich, who by the looks of the film decided he was in a movie about Leslie and not about Glen and behaved as such.  As a director, C.K. is appallingly bad.  The performances are all dreadful, and at times it seems like we are watching a bad rehearsal and C.K. opted to put that in.

It's appalling to see how bad actors like Falco and Morentz can be under bad direction.  The exaggerated manners to their hysteria, anger or shock show they either cannot act or had to fend for themselves.  All the actors are made to be so exaggerated and broad that it is less funny than sad. He reduced Helen Hunt to two scenes at the beginning and end of the film, in the same location, all but telling us he couldn't bother to make her an actual character or could just fit her in to one day's shooting.

I would blame him for agreeing to be in something that required such behavior.

C.K.'s performance is equally awful.  Glen isn't interesting or sympathetic enough to have us care about his plight, and we watch as he stares off at times trying to figure out how to act as he rolls along.

Above all else, the script is lousy.  It isn't clever, it isn't intelligent, it isn't interesting.  Even in his efforts to be amusing, such as having the Emmy party singer belt out songs called China Doll and Mother, May I? come across as someone trying too hard to be clever.  However, the closing song, I Love You, Daddy, was not that bad.

Finally, I'm surprised no one has commented on the pun of I Love You, Daddy.  China means 'daddy' as 'father', but aren't older men sometimes called 'daddy' by the pretty young things whom the daddies squire around town?  There are many 'sugar daddies' in the world, and I am surprised that 'daddy' here could not just mean Glen, but also Leslie.

I Love You, Daddy may never be released to the public, and having seen and suffered through it, I think if it had, people would have walked out at this pretentious, inept, badly-acted film.

I find that the stories of Louis C.K.'s comedic genius have been greatly exaggerated.