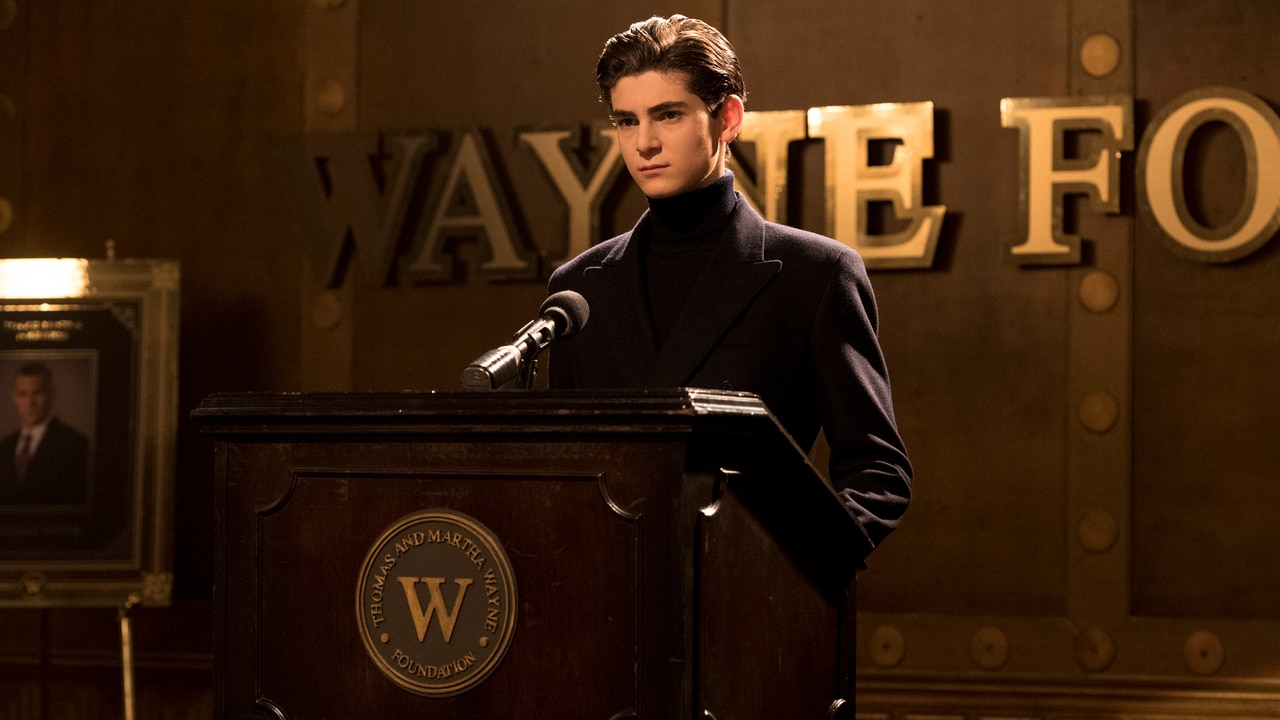 How crazy is a Gotham episode where Selina Kyle, future Catwoman, is the most moral and rational of our characters?  Reunion does a great job using its title to mean so many things, both for good or for ill, and it is exceptionally well-acted with some genuine twists.

It also has that graphic violence that still troubles me to no end.

Bruce Wayne (David Mazouz) has finally come to the realization that his indulging of the flesh has not healed his soul.  He asks his loyal manservant, Alfred Pennyworth (Sean Pertwee) to return to Wayne Manor and him, but Alfred refuses until he gets a sign that Bruce really has changed.  Moreover, he still thinks Bruce has not embraced all the qualities of who he really is, both the light and the dark.

Ivy Pepper (Peyton List) is plotting her newest murder spree, targeting all those who have done her wrong.  Her efforts to kill former Detective Harvey Bullock (Donal Logue) fail when he is not at his bar, but then she gets an unexpected bonus when, using her hypnotic powers, gets Bullock to 'reunite' with his former partner, Captain Jim Gordon (Ben McKenzie) and lure him into a trap.  Her efforts to kill two birds with one stone: have Harvey kill Gordon then kill himself, go awry when Gordon uses his intelligence to outwit them both.

Sofia Falcone (Crystal Reed) is now plotting to take over all of Gotham, but there is still one area not  under her control: The Narrows.  She 'reunites' with her former sister-in-law, Leslie 'Lee' Thompkins (Morena Baccarin), the unofficial Queen of the Narrows.  She pushes Lee to force The Narrows to pay 30% on all activities, which Lee knows will break The Narrows.  Lee tries to convince Sofia that it would be better to leave The Narrows alone by offering information on Gordon, but Sofia scoffs at this.  She uses Lee's own men against her, as well as bringing back the former Narrows boss Sampson (Stu 'Large' Riley) to do Lee bodily harm.

As she is technically family, Sofia will only smash one of Lee's hands. 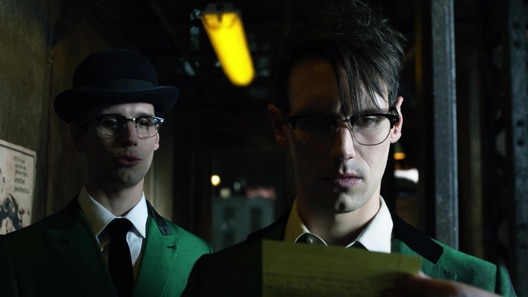 Edward Nygma (Cory Michael Smith) continues to struggle against being 'reunited' with his alter ego, The Riddler.  It's a losing battle as the decency of Nygma continues to face off against The Riddler's malevolence.  It gets to a crisis point where Nygma decides to commit suicide rather than let The Riddler take over.

However, another alternative comes his way, and Nygma volunteers to commit himself to Arkham.  As he figures he has won over his darkest impulses, he gets a nasty surprise.

Waiting for him is his thwarted love, Oswald Cobblepot aka The Penguin (Robin Lord Taylor).  Pengy reveals that the letter he sent to Nygma was not really for Nygma, but for the one whose name he would not speak.  Now, however, Penguin speaks it, and speaks it with pride...The Riddler.  It was all part of his plan to break his enemy, and in turn get his help in breaking him out of Arkham.

Edward Nygma finally collapses, and The Riddler has taken over.

Ivy's plans for revenge culminate at the Wayne Foundation Annual Dinner, where she plans to kill everyone with her poisonous shrubs.  Bruce has already left but sees the chaos of the event and the GCPD storming the place.  After saving Alfred, his loyal manservant tells him he has found his destiny.  A disguised Bruce defeats one of Ivy's henchmen, and avoid capture by Gordon after the latter shoots him, the bulletproof vest saving his life.

Ivy escapes but finds Selina (Camren Bicondova) at her place.  Selina is determined to stop her murderous frenemy, and it becomes a duel to the near-death, with both of them coming close to killing the other.  Ivy warns Selina to stay out of her way, and withdraws her killer claws.  This frees Ivy from the knife-point Selina has, though the Lazarus Water is now all gone.

Alfred returns to Wayne Manor, reunited with Bruce and it feels so good.

Reunion manages to balance all its spinning stories quite well: Ivy, Edward, Bruce, without shortchanging the others. There is never a sense that one story is the main story that overwhelms the others, though I figure Ivy is the dominant story as it is her plan to commit mass murder that drives a lot of the action.

As a side note, if I were a Gothamite I would seriously avoid the Wayne Foundation Annual Dinner.  It seems that every year some crazed super-villain attempts to kill everyone there.  I'd just send the check next time.

Director Annabelle K. Frost not only balances all the stories well in Peter Blake's script, but draws great performances out of this extremely talented cast.  The early scenes between Mazouz and Pertwee are especially strong and moving, their interplay so well-done. Bicondova too excels as Selina, whether facing off against Ivy or summarily dismissing Bruce, who is in search of someone to talk her.  Her mixture of toughness and morality makes this version of the future Catwoman exceptional, and true to the idea that Catwoman is more anti-heroine than straight-up villain.

CMS really does exceptional work in essentially a dual role, showcasing the gentility of Edward and the coldness of The Riddler. Granted, given the tortured relationship between Nygma and Cobblepot, I was not sure whether they'd kill or kiss each other, but Smith really has done exceptional work.  Even in his one scene, RLT shows simply what a find he was as The Penguin, coming across as both almost childlike and extremely dangerous.

I find that Logue, despite looking quite awful: overweight, in need of a haircut, still makes Harvey into someone you like, and his pairing with McKenzie's Gordon continues to work.  List's Ivy still vamps it up, but in a good way, and in smaller roles Baccarin and Reed maintain truth in their character's basic decency and evil respectively.

All the qualities in Reunion, however, cannot make me forget what I consider a gruesome moment when Sofia smashes Lee's hand.  By Gotham standards, this was pretty tame, especially since unlike past episodes, we did not see the nature of Ivy's killings.  However, what we saw was quite enough.

Given all the wild and actually logical twists, the strong acting, and the evolution of the characters heroes and villains, Reunion was an exceptional episode.  I am knocking a point for what I considered a bit too graphic a moment, but on the whole, this season of Gotham has been its best.

Next Episode: The Sinking Ship, The Grand Applause
Posted by Rick at 1:20 AM