The Olympic Games Held at Chamonix in 1924: A Review The Olympic Games Held at Chamonix in 1924

The Chamonix Winter Games were the first Winter Olympics, though at the time they were billed as a mere 'winter sports week'.  The short film that covered these inaugural games is again another fascinating portrait of a long-ago time where things seemed simpler then, but The Olympic Games Held at Chamonix in 1924 also had some surprising technical and artistic advancements that would prove far more reaching than thought at the time.

The beautiful sights of the French winter dominate Chamonix in 1924, where surprisingly all the events were held outside.  Some events would naturally have to be outside, such as bobsledding and ski jumps.  However, we also see ice hockey and figure skating also take place in the out of doors, which should surprise those who are now so used to seeing these events take place inside a massive arena.

Here is where we see Chamonix in 1924 was not something considered something earthshaking at the time.  Far from it: these first Games have a very congenial, almost chummy nature to them.  The Parade of Athletes, while more organized than the one for Stockholm, took place through the streets and even on sleds.  The curling teams marched with their brooms.

It all looked more like a jolly holiday in the mountains than anything as serious as "The Olympic Games". 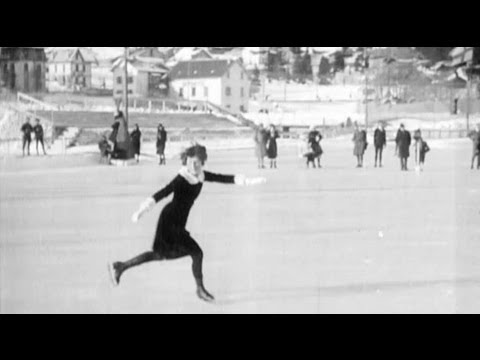 As mentioned, all the events took place outdoors, and the events we do see show the signs of the times.  For example, when we see the Ladies figure-skating competition, they wear long dresses and even hats.  No sparkling short skirts here.

It does make more sense to wear something longer and heavier when you are outside spinning, but what we see here is that the event was not as deep into artistic presentation as it would become.

We also see how far certain other events have come.  The various bobsledding teams astonish in their bobsleds, which are made out of wood and are fully open.

Not that we get to skimp out on the danger element.  One of the bobsledding teams had an accident that caused one member to have both his legs broken.  Another athlete, a ski jumper, also suffered broken legs.

Some of the imagery is remarkably beautiful both athletically and aesthetically.  We see a cute little girl doing some figure skating, a sign of the future.  We also see some of the elegance and beauty of the ski jumpers, courtesy of director Jean de Rovera's use of slow-motion.

Chamonix in 1924 makes great use of slow-motion, to where even a figure skating falling has an elegance and interest.  There are some beautiful moments thanks to the slow-motion, and we see that de Rovera is now adding an artistic touch to the presentation of events.  Part of it might have been technical: seeing the ski jump at regular speed may have been near-impossible.  However, the use of slow-motion made things not just easier but quite poetic.

However, we also see in Chamonix in 1924 that people are still the same.  As we are introduced to the American hockey team (which lost 6-1 to the Canadians), one of them does a little dance as the camera passes by.  Some of the bobsledders find the camera amusing as they essentially mug for the camera.

It's nice to know our ancestors could be just as silly as we can be.

Now, the images from Chamonix in 1924 are not as sharp as those from The Games of the V Olympiad Stockholm, 1912, but I put that down to the quality of the originals versus the restoration.  That is a minor point, for in other aspects, The Olympic Games Held in Chamonix in 1924 moved the coverage of the Olympics further.  At a brisk 37 minutes, it is another excellent feature in this massive collection.

Next Olympic Film: The Olympic Games As They Were Played in Ancient Greece
Posted by Rick at 1:53 AM