The Commuter: A Review

I got a strange sense that I knew The Commuter existed in another form, as if this story was familiar to me.  I was put wise when I was told by others that just by the trailer, The Commuter was essentially 'Non-Stop On A Train'.

Michael MacCauley (Liam Neeson) is an Irish immigrant and former cop who now sells insurance.  He has a wife, Karen (Elizabeth McGovern) and a son, Danny (Dean-Charles Stanton).  Danny is getting close to going to college and the MacCauleys are in a tight financial bind with his schooling and their mortgage.

It's probably the worst time for Michael to be let go, but let go he is.  He meets up with his old friend and former partner Alex Murphy (Patrick Wilson) for drinks before heading back to the suburbs to tell Karen that they are in for hard times.

It's on the commuter train where Joanna (Vera Farmiga) approaches him.  She tells him that he can get $25,000 if he does one little thing: find another mysterious figure named 'Prynne' on the train.  That money is hidden in the toilet, and to his surprise he finds that it is actually there.

From that point, Michael is swept into a maelstrom.  Attempts to 'break the rules' leads to other people's deaths, and he learns that his wife and son are in danger.  He must identify this 'Prynne' from among the passengers before it reaches its final destination.

Could it be the young girl who is carrying fake IDs for her boyfriend?  The obnoxious Goldman Sachs employee?  The tough-looking burly man?  The sarcastic nurse?

After a lot of fights and near-escapes from death, Michael finally finds who among the last passengers is 'Prynne' (not the real name).  We find that Prynne's life is in danger, as Prynne was going to meet the FBI at the final stop to be taken into their protection.  Prynne knows about a major crime that led to a faked suicide, and what's worse, it involved police corruption.

Michael's desperation to not kill Prynne forces him to derail the train.  Now it's a tense standoff before we reach our conclusions.

No one is ever going to accuse The Commuter of being reasonable, rational, or logical.  It's in many ways so wildly silly, the type of story where we get endless number of convenient coincidences and 'shocking twists' that are neither.

It even takes away a good plot point when during one of Michael's many escapes from death, he ends up losing all but $100 of the stashed loot.

You don't go into The Commuter with a sense that this is going to be anything other than a lightweight action thriller, one to enjoy if you just roll with it and don't think too much on the plot.  It's just an excuse for Neeson to make some money and cement his reputation as one of the most unlikely action stars we have.

I could not help thinking how much more I would have enjoyed The Commuter if Neeson and Farmiga had switched roles.  At a time when female representation is getting more notice, why couldn't a woman be a regular person who can be an action star in the turn of a dime?

I also could not help thinking how many genuinely talented people took a nice paycheck out of something they must have known was so much trash.

Farmiga is such an underused actress.  McGovern was barely in the film long enough to be anything but a plot device, and her manner shows she is still acting as if she's the Countess of Grantham.  Wilson and Sam Neil pop in at the beginning and the end, and you'd have to be a total idiot to not know which one will be the major threat.

There is, however, a certain pleasure seeing all these talented performers shill themselves out for something as silly and inconsequential as The Commuter.  You get to see people with strong acting skills attempt not to laugh at the entire thing when the film plays almost as spoof. 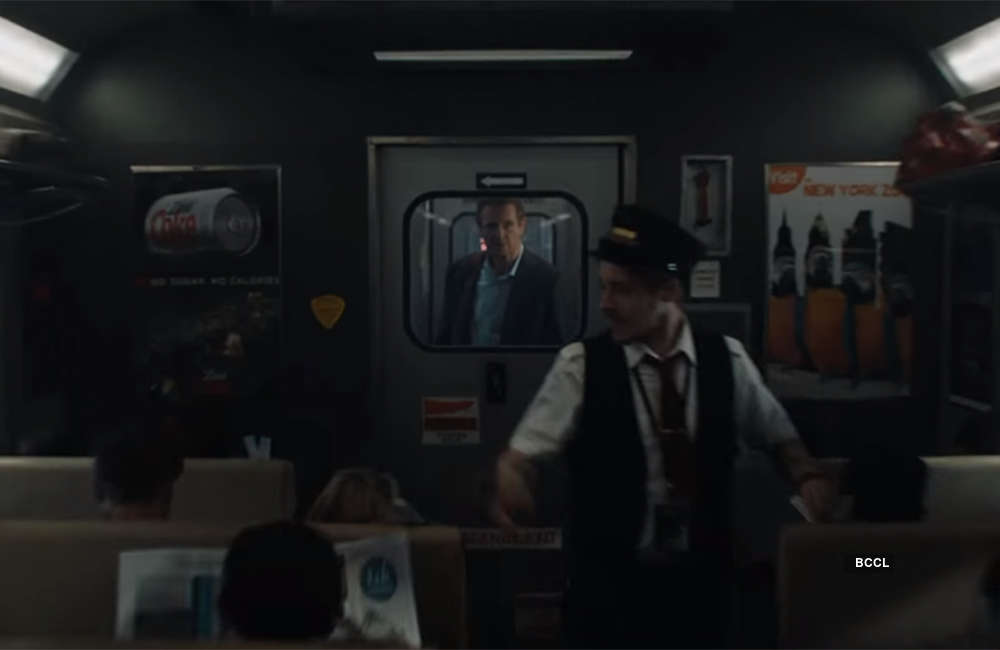 In terms of performances, The Commuter is stolen by Adam Nagaitis as Conductor Jimmy, the junior conductor on this commuter train of death.  Jimmy would make for a fun spin-off: wisecracking, not embarrassed to be seen as lazy and cowardly, and with a sharp sense of survival.

In what is supposed to be a gripping and tense scene, the surviving passengers tell the hired assassin, "I'm Prynne" in an effort to save the real Prynne in this ripoff from Spartacus.  When the hitman turns to Jimmy, he says, obviously frightened, "I'm not Prynne".

Nagaitis is the comic relief in The Commuter, and he does such a good job that he outshines just about everyone else.

In a sense, The Commuter knows itself and its tropes so well it doesn't even bother to try and hide the obvious.  It is what I would call a romp, and one that knows what it is: a diversion for a boring day.  It's not logical but it is entertaining, and as I've said, I cannot fault a movie for living up to its expectations.