The Librarians: And A Town Called Feud Review

THE LIBRARIANS: AND A
TOWN CALLED FEUD

The Librarians in Season Four has stumbled a few times, the stories almost parodies.  And A Town Called Feud is part of the rebuilding effort, and it's a good one, putting in some things that are surprisingly logical and some things that sadly seem to come out of nowhere.

The Librarians are still divided over how to resolve the Tethering Issue.  The Guardian Eve Baird (Rebecca Romijn) has to be tethered to a Librarian, and it's been generally accepted that There Can Be Only One...Librarian.

The very first one, I suspect, was really a Highlander, but I digress.

Jacob Stone (Christian Kane) and Ezekiel Jones (John Kim) believe there can be only one, and that he should be The One.  Cassandra Cillian (Lindy Booth), and Caretaker Jenkins (John Larroquette) are firm in their belief that there can be more than one Librarian.  Baird for her part is stuck in the middle.  The Clippings Book comes to the rescue, as it sends them to the town of Feud, sight of the best visual metaphor for the Civil War.

Stone, Jones and Baird go to Feud, while Cassandra and Jenkins stay behind to do 'research'.  As a side note, it makes sense that after the Cassandra-centric And the Hidden Sanctuary that she sit this one out.

Stone, Jones and Baird find they've come at the annual Feud Festival, where there is a Civil War reenactment of a battle that pitted brothers Uriah and Carlton Loveday on opposite sides of the War Between Brothers: Uriah for the Confederacy, Carlton for the Union.  They killed each other in Fugue, a town which changed its name to Feud to commemorate the battle between the ironically-named Lovedays. 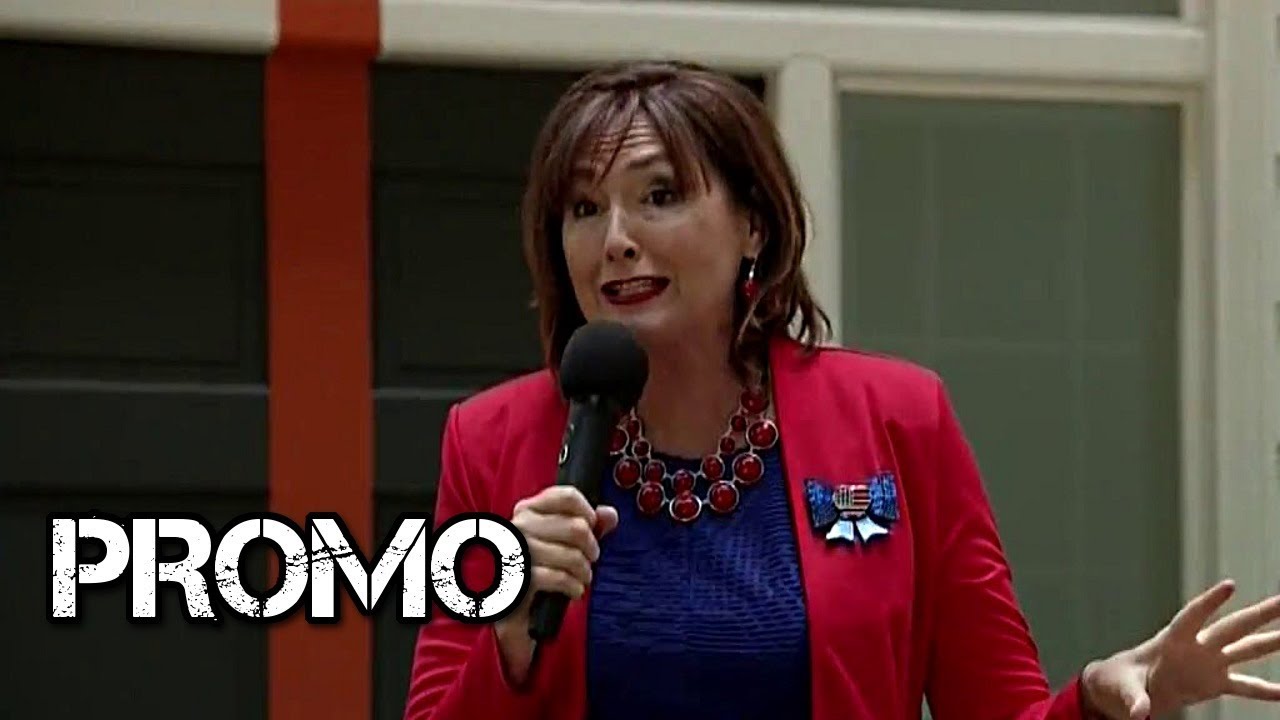 The Loveday House Museum director, Janet Hedge (Nora Dunn), has been the patroness of the Feud Festival and battle reenactment, literally painting a line through town and right down the Loveday House.  She also makes a surprise announcement: the second half of a locket the two brothers had received from their mother that they broke apart has been discovered, and it will be put together at the Festival as a symbol of reconciliation.

However, all of this sounds rather fishy, especially to the history-loving Stone.  Jones, for his part, struggles to not steal anything, and fails, picking up an "All American Boy" cap from the gift shop.  Once he slips it on, Stone quips 'You finally got your green card?'  Stone is more angry when Hedge tells them, 'History IS a theme park,' dismissing their concerns.

These concerns are more than quibbles about historical accuracy.  Rehearsals for the battle reenactment have spawned ghost sightings, warning that 'the brothers are coming'.  The reenactors too are fighting, especially Griz (Dan Considine), on the Confederate side who also believes in aliens and conspiracy theories, and Devon (Ben Newman), the Union reenactor who thinks Griz is bonkers and who has fought with him since high school.

Meanwhile, Cassandra essentially seduces Jenkins with High Tea into helping her find proof that the Westphalia Brothers, the only time the Library tried a dual Librarian role to disastrous results (their war leading to the Dark Ages), really is more myth than truth.  This is not helped by the curious clues left by a previous Librarian: Zelpha the Forgetful.  She had taken information about the Westphalia Brothers and left little notes to help her find them, but her notes are riddles that even she probably could not figure out.

Stone and Jenkins continue fighting over who would make the better Librarian, much to Baird's frustrations.  They stubbornly refuse to see that they compliment each other, their skills enhanced by the other's own.  Jones sees what he calls 'a golem leprechaun' apologizing for having lost something as he rings a bell, and Stone sees a woman dressed in black.  Both ghosts also say 'the brothers are rising', and with them come troops.

Eventually, the Loveday Brothers do rise, along with their respective ghost troops, after Hedge joins the two parts of the locket.  However, the Librarians find she had nothing to do with this, and the battle is about to commence when the ghosts take over the reenactors' bodies.  The two brothers take over Jones and Stone and they point their weapons on each other.  However, we learn the truth: the brothers had reconciled before they were killed together in Feud, the true story hidden in myth and hype. 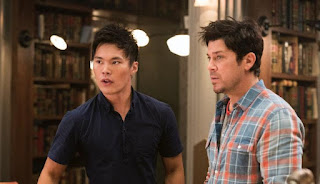 The ghosts also reconcile with Carlton's son (the 'golem leprechaun') and Uriah's wife (who as a black woman, could not legally marry the man she loved).  The town will adopt a new name: Forgiveness.

Unfortunately,  once Stone and Jones now agree that the Library can have more than one Librarian, Jenkins and Cillian now see that it cannot, so we're right back where we started.

I think that A Town Called Feud makes clear that when the first ghost says 'The Brothers Are Rising', he don't mean fellow troops.  This episode split the team into two groups, and it worked well in showing how they came to opposite views from where they started, at least with the Jones/Stone side, less so with Cassandra/Jenkins.

We did have nice moments of comedy (Jenkins' elation at High Tea is a delight), as well as the squabbling between Jones and Stone.

I do wonder about the reenactors however.  Is it a coincidence that the eccentric cook/Confederate reenactor is named 'Griz' ('gris' being the French and Spanish word for 'grey')?  If that weren't already curious enough, the dialogue between Griz and Devon as they confront each other is curious to say the least.

Griz and Devon are holding weapons to each other, and Griz tells him about how angry he was that Devon 'stole his boyfriends'.  Devon replies that they left of their own accord and they loved him, not Griz.  I think what I found strange about this exchange is that it came completely out of left field.  There had been no indication that Devon and Griz were nothing more than school rivals, not thwarted lovers.  It just seemed to be there for no reason, just thrown in there.  It isn't funny, it isn't relevant; it just seemed pointless.

In terms of performances, And A Town Called Feud is proof that Dunn simply does not appear on television enough.  She was caustic, even slightly menacing but not without a touch of humor as Janet Hedge, History Perverter.

And A Town Called Feud has a positive message (the power of forgiveness, though I would have thought the town should be renamed 'Reconciliation'), moved quickly, and had nice moments of comedy along with the action.  Minus a few hiccups, this shows The Librarians can return to form.

Next Episode: And Some Dude Named Jeff
Posted by Rick at 9:36 AM