A Special Day: A Review 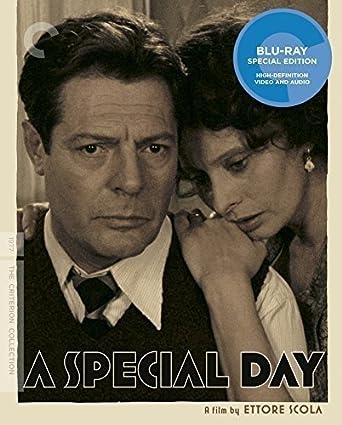 A Special Day (Una Giornata Particolare) is a departure for its two leading stars. It is a sad, haunting tale of two people who are so different and yet so alike, finding that the other is not what he/she seems.

May 8, 1938, Rome, Italy.  Adolph Hitler has come to meet his Fascist counterpart, Benito Mussolini.  Il Duce pulls out all the stops for Der Fuhrer, hosting him to a lavish parade and all Rome it seems is there.  Well, almost all Rome.

In a nondescript apartment complex there are at least three people who will not be attending.  Housewife Antonietta (Sophia Loren) would like to go with her husband and six children, but the housework cannot wait.  She knows that the apartment concierge (Francoise Berd) cannot go either, and Antoinetta figures she is alone in the complex.  After having readied her family to attend, all loyal if not fanatical Fascists like the concierge, she begins her duties.

One of them is feeding Rosamunda, the family myna bird. To her dismay, Rosamunda escapes and Antonietta becomes frantic.  Fortunately, she spies that someone else hasn't gone to the parade, a man living across the way.  She goes to that apartment and asks for help.  The man, Gabriele (Marcello Mastroianni) agrees and together they get the myna back.

Gabriele seems lonely, and Antonietta is surprised to discover he was a radio announcer, though now unemployed.  Both of them are very lonely people, and they begin a conversation.  She goes, but he then goes to her apartment, where over the course of 'a particular day', they spend the time laughing, arguing, commiserating, and revealing.  She discovers that Gabriele is a homosexual and anti-Fascist, two things our Catholic devotee of Mussolini doesn't understand.

Yet, she sees a kindred spirit in his kindness and need for someone. At the end of this day, they do appear to have a tryst, but she leaves to meet her family.  She begins reading the book he gave her, The Three Musketeers, and watches as the police take him away.

A Special Day is a showcase for our two actors, who essentially play it as a two-person play.  This is a total departure from the screen images of both Loren and Mastroianni.  The epitome of glamour and seductiveness, Loren plays a frustrated, sad, and somewhat frumpy housefrau. Mastroianni, of whom one can say is also the epitome of glamour and seductiveness, plays a quite, haunted homosexual. Both roles are clearly at odds with how most of us see them, and yet they surpass themselves in showing just how strong they are, both as actors and as a screen pairing.

In terms of performances, Loren and Mastroianni achieve something extraordinary; they display true emotions in these two figures.  Loren's Antoinetta seems to carry such unhappiness within, and in a way her support for Fascism and Mussolini is not one built out of hatred towards others like Gabriele, but more as something to make her life a little brighter.  She knows her husband is consistently unfaithful, and worse, his current mistress is something she is not: educated.  Loren as Antoinetta has wonderful moments, such as when she reveals the deep hurt she has, not so much of her husband's infidelity but in that his mistress has more education.  It is not the sex that bothers her so much as a sense that she isn't worthy. 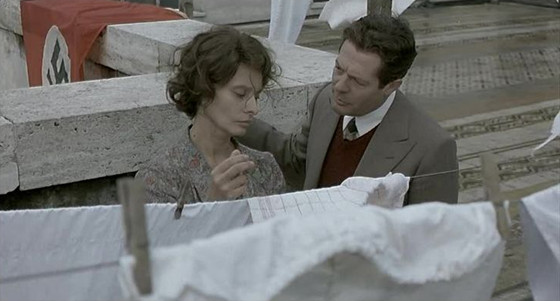 That is probably why she gravitated towards Fascism and Mussolini, down to having a photo album of Il Duce, a collage of Il Duce made up of buttons, and even speaks movingly of when she saw him briefly on horseback, to where she fainted when their eyes met.  A Special Day, in that respect, gives an indication as to why Italy and Germany both fell sway to these tyrants.  It may not have been just a mad desire to wipe out peoples en masse.  It might just have been to feel part of something great, something that would improve their lives.

I feel I've wandered off a bit.  As strong as Loren is as this sad, heartbroken and simple woman, Mastroianni is equally strong as this man, finding himself on the verge of exile if he is lucky, hiding his sexual orientation and seeking solace among anyone with a friendly face.  Mastroianni is gentle and almost meek as Gabriele, a man on the verge of losing everything and finding on this day a kindred spirit in a most unlikely place.

However, when he rages, he rages.  Given how gentle Gabriele is, when he finally explodes with Antoinetta, screaming at the top of his lungs that he is homosexual, including terms for it that I won't use, you see the anger burning beneath him.

He and Loren give simply magnificent, heartbreaking performances.

It's to director Ettore Scola's credit that he kept the audience's interest when so much takes place in a confined space and with basically two people.  He also bathes the film in sepia, filling in with a sense of the pathos of the past.  He has a great tracking shot where we first enter the family apartment, the camera moving smoothly from room to room as Antonietta rises everyone and gets her family going, the weariness within her close to the surface.

A Special Day is a very quiet film, and a very moving one.  It's a sad and haunting tale of two people who find each other just when this monumental event will shape their small lives without their active participation.  It's a sympathetic portrait of these two different yet similar people, tenderly portrayed by two fine actors.