It's A Beautiful Day On The Hudson. The Doris Day & Rock Hudson Retrospective This is the truly amazing thing about Doris Day and Rock Hudson. We think of them as one of the great pairings in film history, in the same ranks as a Powell & Loy or Tracy & Hepburn, Mickey & Judy or Frankie & Annette.

Their collaboration certainly puts them up there with those immortal screen couples.

The teaming of Day and Hudson worked so well that we think of them as a long-lasting partnership when in reality their joint output is surprisingly small.  People are genuinely shocked when they learn the truth about the Hudson/Day collaboration.

Compared to the 14 films of William Powell and Myrna Loy or 9 between Spencer Tracy and Katherine Hepburn, Doris & Rock worked together on only three films: Pillow Talk, Lover Come Back, and Send Me No Flowers.  Even Mickey Rooney & Judy Garland and Frankie Avalon & Annette Funicello made more films as a duo (by my count 8 and 7 respectively not counting cameos in other films starring one or the other).

Today, I look over the Rock Hudson/Doris Day total collaboration to see if I can find what made them work so well. First, a brief overview of the three films: Pillow Talk, Lover Come Back and Send Me No Flowers.

Pillow Talk: Playboy songwriter Brad Allen and interior decorator Jan Marrow have to share a 'party line' (a phone number accessible to more than one person), much to the irritation of the other.  Brad, however, discovers what Jan looks like and is smitten.  Creating a wholly fictitious character, Jan soon falls for 'Rex Stetson' until she eventually gets wise to things.

Lover Come Back: Advertising rivals Jerry Webster, lackadaisical man-about-town, and Carol Templeton, hard-charging single/single-minded lady, constantly fight for clients.  Carol finds Jerry's habit of winning clients by underhanded methods maddening but she's frustrated by her failed efforts to get him thrown out of the industry.  In a series of mix-ups, Jerry is forced to not only come up with a fictitious product called "VIP" that was erroneously marketed, but pretend to be Dr. Linus Tyler when Carol mistakes Webster for Linus.  Things come to a head when Carol, in love with 'Linus', discovers the rouse.

Send Me No Flowers: Hypochondriac George Kimball, through a series of misunderstandings with his doctor, is convinced that he is dying of a heart ailment.  He decides to keep this 'news' from his very tolerant wife Judy, down to buying joint burial plots.  George, however, wants to ensure Judy is looked after his 'death', so he decides to start husband-hunting.  It isn't until Judy finds an old flame that George's jealousy starts outweighing his will to die.  The situation grows more bizarre when both discover that George is actually in better shape than anyone they know and Judy suspects the whole thing was a way to try and cover up an affair she imagines George to have had. 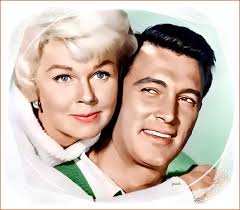 It's a curious thing that in each film, there is a strong element of deception. Both Pillow Talk and Lover Come Back center around a false identity with the rakish Rock pretending to be a virtual innocent to the goodhearted Doris.  She in turn falls in love with the false identity only to be equally heartbroken and enraged to find the object of her affection is her sworn enemy.

She was a goodhearted woman in love with a good-timing man.  Unlike Waylon Jennings' song however, the situations are played for laughs.

With Send Me No Flowers, there is deception, but it is accidental, made more farcical when Rock attempts to lie his way to the truth only to get tripped up by a logical but bizarre reality.

Despite Oscar Levant's famous wisecrack, 'I knew Doris Day before she was a virgin', these three films show that in her own way, Doris was no naive waif.  In each film she attempts to 'help', even 'fix' the man she has fallen for. She attempt to bring him out of the shell he pretends to be in not with feminine wiles, as her characters don't use wiles.  Instead, her characters fall into a stereotype of women attempting to 'change' a man.

Doris' characters would never bother with the 'real' characters, as they represent all that she hates: manipulation, insincerity, deceit.  The comedy comes from Rock's characters pretending to be the type of man Doris would fall for: naive, sweet, more innocent and downright virginal than she is purported to be.  Day's characters were not unaware of sex, and despite her screen image I never found a suggestion that she was a virgin. 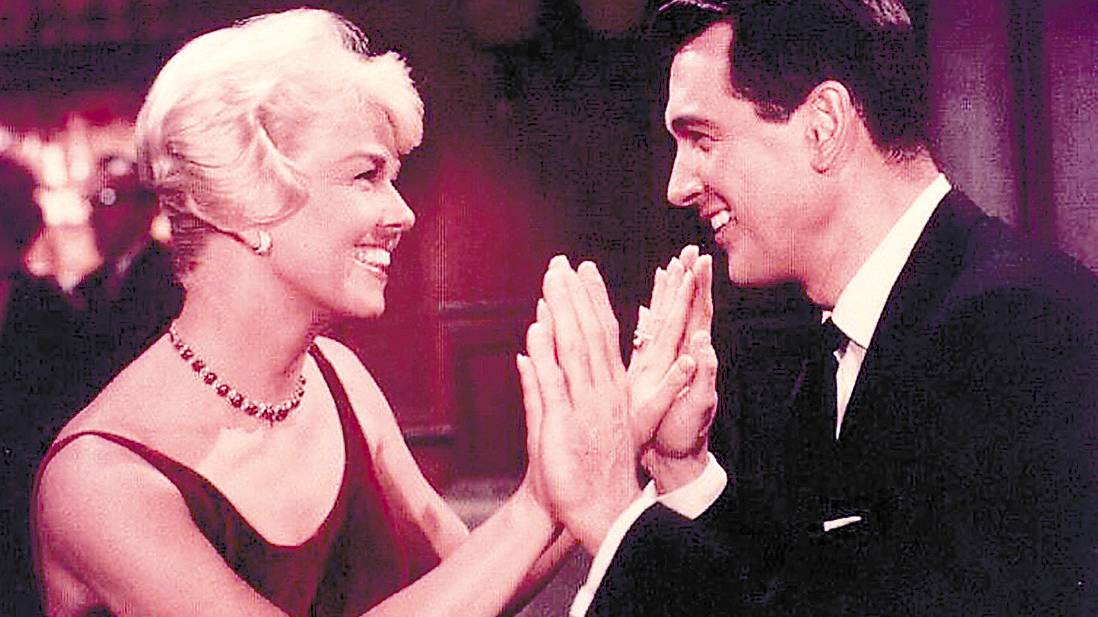 Instead, Doris Day's characters were actually positive role models for women.  They were self-employed or had major positions in a male-dominated world.  They lived independent lives without needing a man to provide or take care of them.  Doris' characters, rather than be sexless because of their looks, were free of entanglements.  Their lack of promiscuity, especially compared to Rock's characters, was not due to a lack of ability, but to a decision to be selective.

In short, it wasn't that Doris Day's characters were perpetual virgins.  It was that they made the decision that they would sleep with a man by their own free will.

If one looks at it, Doris' unwillingness to sleep with Rock was not prudishness or morality, but a decision by someone fully in control of their own lives.  Her choice to hold back was actually more empowering, because Rock was forced to chase her.

In the formula of their films though, Doris about to give in to the pleasures of the flesh was thwarted almost at the last minute by discovering the truth.  Here, we can see that Doris was a better role model than she's been given credit for.  Yes, she cried, yes, she was hurt, but she was also enraged and rather than fall into despair, she went into action.  She threw him out of her life and learned from her experience.


Being romantic comedies, however, we know they'll end up together in the end, and they do so only when Rock repents of his sins.  Doris, contrary to what others might think, was the one in full control.

I think the best way to describe why the Rock Hudson/Doris Day films were so successful is that they were 'innocently risqué'.  They relied on double entendres to suggest more than what was said, yet they never made any overtly indecent proposal.  They both gave a slight edge to what they said to each other and others but still say it in a surprisingly wholesome way.

The best example is in Pillow Talk, which is surprisingly racy given they don't have a physical relationship. Just the title, 'pillow talk', is quite daring.  Thanks to the split screen we get a titillating and arousing set of moments: Doris and Rock metaphorically in bed together, both of them in their own bathtubs playing virtual footsy, Rock carrying Doris all the way to his apartment while she was still 'under the covers'.  There's a lot of suggesting going on, but that's what makes it all the more fun: the fact we 'see' things while still being able to say it isn't what it looks like.

Another unexplored or mentioned reason for their success is in the interactions between their distinct characters. Doris and Rock fed into the idea that not only do 'opposites attract' but that underneath a cauldron of contempt was a fiery passion.  It's something we've seen before from Beatrice & Benedick to Elizabeth Bennett & Mr. Darcy: two rivals who cannot stand each other but whom you know are perfect for each other.  In these stories, the verbal volley between them masks their true feelings of love and inevitably lead them to romance.

Doris and Rock's characters continue that proud and beautiful tradition.

Their romantic pairing was helped by both being breathtakingly beautiful.  However, I think the greater success to their pairing was due to how they played the characters.

We should look askance at Rock's behavior: he is putting up a front to woo his 'enemy'.  However, through her guileless nature and sincerity, we see what many people fantasize about: the taming of the cad.  Her strength and honesty, along with her physical beauty, was what reformed and redeemed him.  He, in a sense, had to under this trial to become worthy of her.

A final reason for their success is in that they got a chance to play against their image.  Doris managed to be more sexual without being a tart, and Hudson showed he could do comedy after being kept hidden as a purely dramatic actor.  It's a similar change to another great pairing: Powell & Loy, whose images changed to showcase another side after they began their own successful collaboration.

The screenplays help.  Pillow Talk won Best Original Screenplay and Lover Come Back was nominated in the same category.  There is a lot of wit and humor in the films, particularly in Pillow Talk when, again, through a very odd set of circumstances, Rock unwittingly suggests he is pregnant!

In each film, the elements within them: polar opposites who find love with each other in the end, a couple of good songs for Day to sing, beautiful costumes, a series of misunderstandings that lead to funny moments and a happy ending, all work together to make their collaborations such a successful one.

Finally, I think Tony Randall, the third wheel in this trio of films, has not gotten the credit he deserves.  He is the catalyst for some of the misunderstandings, and his character is an important element in what makes the films charming and funny.  Randall's characters are the flustered, neurotic 'voices of reason/authority' whom everyone either ignores or acts against, the comic relief in a romantic comedy. 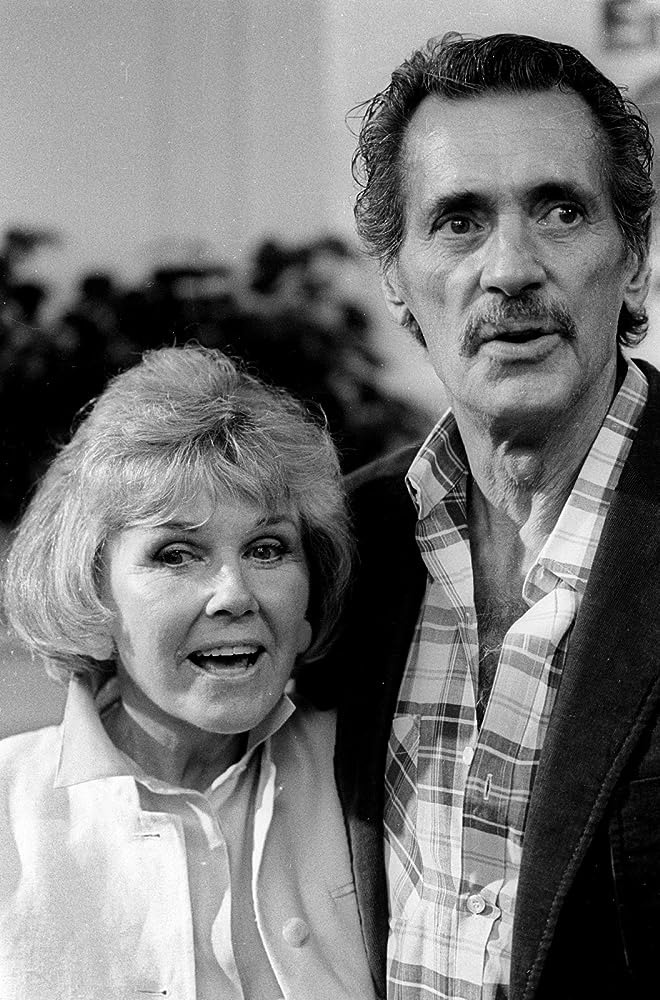 When watching the films, we can forget that reality would not allow for a real happy ending. Doris and Rock's final collaboration when Hudson was a guest on Day's animal-related television show Doris Day's Best Friends shocked the public with Hudson's physical deterioration due to AIDS.  The tragedy of Hudson's death should not put a dent into the enjoyment of this wonderful pairing, though the suggestion in Pillow Talk that 'Rex Stetson', playing on gay stereotypes, may be gay seems to put a bizarre edge on things.

We should instead focus on the laughter and joy their collaboration brought.  It's so rare to find a screen couple that works.  I think that the teaming of Doris Day and Rock Hudson is among the greatest and most enduring, a type that remains with us today.  Their joint body of work is small, but it's a credit to them as performers that even decades after their final films, we still think of them as a couple.

When William Powell died, the public sent condolences to his on-screen partner, Myrna Loy, owing to a strange idea among people that they were really married.  I don't know if Doris Day got any messages of condolence when Rock Hudson died, but it seems fitting if she did.

They just were so great together.