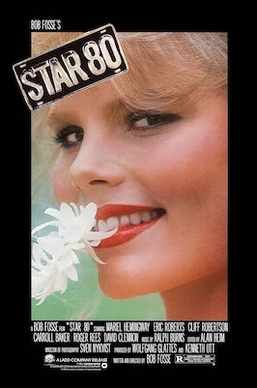 Told in a faux-documentary style with flashbacks to the time prior to the murder of Stratten, we see how Paul Snider (Eric Roberts) entered the life of Dorothy Stratten (Mariel Hemingway).  Paul was a small-time player and pimp who came up with wild plans to make money and 'be somebody'.  He meets Dorothy in Vancouver, British Columbia in 1978 when she's working at a Dairy Queen.

Young and naive to the point of being totally innocent, she is charmed and flattered that someone would pay attention to her.  Paul attempts to ingratiate himself to her family, but while Dorothy's younger sister seems taken in, neither her younger brother or her mother (Carroll Baker) seem to care for him.  Paul takes pictures of Dorothy, which he uses to get more professional photographers to take an interest in her.

The ultimate goal is Playboy Magazine, and Dorothy is surprised that anyone would think she could possibly be a Playmate.  Dorothy's mother refuses to sign the consent form, as she is only 18.  Somehow, however, Dorothy and Paul go to Los Angeles.  While Dorothy's natural charm and endearing, innocent manner make headway with people, including Playboy founder Hugh Hefner (Cliff Robertson), Snider's efforts, however, fail spectacularly, as his over-eagerness to please comes across as more smarmy than sincere.

Hefner thinks Dorothy has major crossover potential to become a star, if not an actress.  Dorothy goes along with things, even if she seems thoroughly uninterested in a career.  Her excitement however grows when she meets Aram Nicholas* (Roger Rees), a famous film director who is equally fascinated by Dorothy's external and internal beauty.  Something akin to My Fair Lady takes place as Dorothy begins wondering if there is more to her and the world than what Snider has given her.

Eventually, Snider's rage and jealousy cause her to split up with her now-husband, but despite Aram's warning to not see Snider, at least alone, she goes one more time to the apartment they shared, for the last time.

Star 80 never comes across as manipulative or exploitative, though the film can be read as a meditation on exploitation.  Dorothy was exploited in some way by every man she dealt with, certainly and most overtly by Snider but also by Hefner and even Aram.  Star 80, a film about the tragic and sordid nature of her death, in a strange turn may be the most respectful portrait Dorothy Stratten ever had.

The film is respectful of Dorothy in Mariel Hemingway's performance, as she makes Dorothy into a young woman who is extremely kind and naive.  It's as if she were a younger real-life version of The Golden Girls' Rose Nylund.

Take this exchange from one of the many "interviews" the film features.  Dorothy, almost apologetically, states that a TV movie she was in, Wednesday's Child, was hardly worth the effort and is fully aware she was bad in it.  "I'm studying," she says with a touch of self-defensiveness.  "The classics?" one of the reports somewhat sarcastically asks.  "No, acting," she gently and sincerely replies. "I don't know anything about music".

We see someone gently whisper into her ear while the reports look at each other and chuckle.  Dorothy immediately puts her head down and apologizes, stating how dumb that sounded.

It takes an actress of incredible talent to deliver lines like those and make the character sound guileless and naive rather than stupid.  Hemingway makes Dorothy someone who is endearing, kind, who genuinely wants to please and has a gentle charm to her.  In Hemingway's performance, there is a Marilyn Monroe-like manner to her, making Dorothy someone you would like to go to bed with and also try to protect her.

Hemingway never makes Dorothy dim or even unaware, but instead a very gentle soul who is just a very kind and nice person. All those things are things that cannot be said for Snider, but Eric Roberts delivers one of the best performances as this man who is desperate to be someone big, someone worthy. It's a credit to Roberts as an actor that he does not resort to making Snider into a cliched monster.

Instead, we see Snider's deep need to be 'appreciated', to be that 'somebody'.  It comes from when we see him early on, and he is rehearsing how he will introduce himself to people.  This desire to be part of a group he yearns desperately to be in comes up again and again, making Snider more pathetic than contemptible, even if he manages to do that to.

When he rages, when he crumbles, when he pleads and dreams, down to pushing Dorothy into getting a fancy car which he will add the vanity license plate 'Star 80', Roberts makes Snider almost sympathetic yet not enough to where we feel sorry for him and especially not sorry over Dorothy. The performance was shamefully overlooked by the Academy, as it is one of pathos and horror.

Robertson keeps to the Hef persona, hinting at how he is more father-figure than exploiter of women. While Baker's role is smaller as Dorothy's mother, she gives a very gripping performance when remembering in an 'interview' that she never signed the consent form to pose for Playboy.  She never openly states that Snider forged her signature (it is unlikely that Dorothy, gentle and honest as she was, would have willingly gone along with a forgery), but as she keeps twisting a towel, she repeats how she didn't sign. 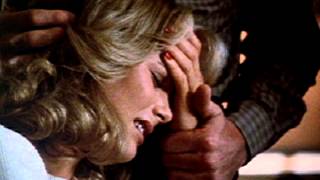 Fosse did something brilliant with the music, something that Martin Scorsese also does.  He used songs to underscore the scenarios.  Unlike Scorsese who uses songs almost nonstop, Fosse is more sparing but no less clever.  From when Paul and Dorothy are at her Prom and slow dance to Just the Way You Are to the repeated use of Do You Think I'm Sexy? when Paul is driving down to Big Shot when he sees Hefner's displeasure at him being at The Mansion, Fosse integrates music well in the film.

If there are flaws in Star 80, it is in the decision to cut between the faux-interviews, presumably taking place after the murder-suicide, and going back to the story.  One doesn't know what the context is with the interviews, and at times seem jarringly out of place.

However, sometimes they work in a very strong manner, as when we hear Dorothy's various interviews, as if either commenting on or foreshadowing her horrifying end.

Star 80 is a very fine crafted film on a story that still leaves chills and tears.  Dorothy Stratten's story is moving and ultimately heartbreaking.  One can oppose pornography and have issues with how it commercializes people, all subjects worthy of debate.  However, after seeing Star 80 and with masterful performances from Mariel Hemingway and Eric Roberts, one feels so much sorrow and sadness for this beautiful, naive girl, a victim of her own beauty both physical and spiritual.


*In real life, Dorothy had the affair with Peter Bogdanovich, but as Star 80 is by its own admission, a fictionalization in part about the lives of Dorothy Stratten and Paul Snider, the name was changed to 'Aram Nicholas'.  Further, the names of Dorothy's siblings were similarly changed, and Dorothy's mother's name was simply not used at her request.