I Could Go On Singing: A Review 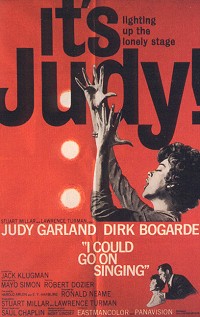 I COULD GO ON SINGING

I Could Go On Singing was Judy Garland's final film before her death at just 47. The title seem apropos to Garland, a woman whose voice to this day still has few equals, let alone rivals.  The title could also reflect her indomitable will to fight on, until she couldn't.  In this, her unintended farewell performance, we get a mere glimpse of what her stage shows were like, and greater glimpses of still untapped acting potential done in by her own demons.

Jenny Bowman (Garland) has come to London ostensibly to give a series of concerts.  There is a hidden agenda however.  She asks her old flame, Dr. David Donne (Dirk Bogarde) for a chance to see Matt (Gregory Phillips).  Matt believes himself to be adopted, but in reality he is the biological child of David and Jenny, the product of a long-ago relationship.  Jenny gave Matt to David and his now-late wife, putting her career first.  Now she yearns for one chance to see her son, who knows nothing.

David is reluctant to open Matt up to Jenny, especially after she promised to not make contact.  However, he gives in for what is meant to be a one-time thing. No surprise that it isn't, as Jenny finds herself yearning for more of Matt.  Matt, for his part, is equally entranced by this famous American singer, though puzzled as to why he is of such interest.  David has to go to Italy on medical business, so Matt and Jenny conspire to take some time to be together.

This is concerning for Jenny's longtime dresser, Ida (Aline McMahon) and her manager George (Jack Klugman), who think Jenny is not only sacrificing her career for this whim, but setting Matt up for a fall.  Eventually, David returns, knowing of what's been going on and furious with Jenny over this.  The truth is accidentally revealed to a surprised Matt, and after some struggle, Matt opts to cut off Jenny.  Devastated, she seems to lose interest in everything, especially her concert appearances, until David comes in, tells her he loves her, and giving her hope for one last chance at happiness.

Take for example her concert appearances.  They are almost exactly how the real Garland would take to the stage, when she managed to take to the stage.  As the orchestra played the overture, she'd wait in the wings, clap her hands and shout to the orchestra, ramping herself up to give it her all.  While one imagines that an actual Garland concert would have been more raucous, I Could Go On Singing gives us a taste of what a stage performance would be like.

The most overt moment in I Could Go On Singing is near the end, when Bogarde tries to lure her to her concert.  She lets out an epic speech that sums up Garland's entire life and career.  She comments about how she 'can't be spread so thin', on how people can take her to the stage but they can't make her sing, and on how she's 'held on to every piece of rubbish there is, and thrown all the good bits away'.  In 'Jenny's' regret, her ego (proclaiming that "I'm ALWAYS a sell-out!") and her talent, it crystallizes far too eerily everything that Garland had.

Over and over, there seems to be no line between the fiction of 'Jenny Bowman' and the fact of Judy Garland, the two overlapping in a role that is not parody but essentially a variation on reality.

As such, it's almost hard to gauge Garland's performance in I Could Go On Singing, for the difference between a character and the 'real' person is so blurred as to make the distinction impossible. If I were to put a view as to Garland's acting, I would say she gives a very strong performance as this talented and needy woman, who wants love and wants to give love but who still struggles to balance life and career.

There is no question whenever she is singing, for Garland makes every song a standout.  As perhaps can be expected, each song reflects something in the story: in the beginning, a joyful and optimistic Hello, Bluebird; when Matt discovers the truth and David pushes her away from the both, the melancholy yet defiant By Myself, and at the end, the title theme.

Curiously, I Could Go On Singing was written by Harold Arlen and E. Y. Harburg, the same team that wrote Garland's iconic theme, Over the Rainbow, again another case of reality and fiction melding in strange ways.

Bogarde comes across as a little stiff as David, but he managed to hold his own against a titanic force of nature like Garland, his reticence to have her and Matt together a genuine concern and not a selfish one.  He also showed that David cared for his son and treated him with respect, not talking down to him about the situations.

Phillips was also strong as Matt, keeping both a strong upper-lip and showing vulnerability and hurt, though one would have expected a greater shock when he learned who his parents were.

As a side note, it's interesting that no one mentioned the potential scandal of Bowman having an illegitimate child revealed or its impact on her career at this time, and the ending is a bit muddled.  David starts by being backstage, but when Bowman looks again he's disappeared.  Has he actually left her for good?  Is he rushing to get Matt there?  I guess it's left to the audience.

A Star is Born is unintentionally autobiographical in that she was in real life both Vicki Lester and Norman Maine.  I Could Go On Singing is more overt to where it almost sad to see, as if everyone knows this is Garland's story dressed up as fiction.  It's well-acted and entertaining, but one never shakes the sense that I Could Go On Singing is equally autobiographical, as if Garland wanted the world to see 'the real Garland' while still maintaining plausible deniability.

It is a good film, though it is up to the viewer to decide how close or far it is from reality.