The Kennedy Center Honors Are Dead To Me And it's a pity too, given that somehow, despite themselves, they stumbled on some shockingly good choices for this year's selection.

I have long argued for two of the 2018 Kennedy Center Honorees: Reba McEntire and Philip Glass.  The former has been a country icon for more than thirty years.  I cannot call her the Queen of Country, at least so long as Miss Loretta Lynn is still around.  Then again, McEntire can be the Queen of Country if Lynn is called The Empress of Country.

I do so wish my friend Fidel Gomez, Jr. were alive to see Glass honored.  Fidel was such an enthusiastic fan of Glass' minimalist work.  I haven't seen Einstein on the Beach but his musical work, particularly his film scores for The Hours, Kundun and Dracula have all been brilliant.

Granted, Glass is an acquired taste, and I know some people genuinely detest his work, finding it both monotonous and repetitive.  There's merit in this argument, but I have been a Glass champion.  I think Glass is innovative and powerful, so this is a worthy selection.

I confess to knowing nothing of Wayne Shorter, but for my part, I applaud any move towards honoring jazz.

Now, with Glass, McEntire and Shorter as Kennedy Center Honorees, I would imagine I would be happy, and I am.  I would have taken it as the Center, long looking foolish by honoring rock bands in an effort to drum up publicity for the declining ratings, was shifting back towards honoring the actual arts.

Again, I love Led Zeppelin and The Eagles.  I even like LL Cool J, though I still simply cannot find logic into putting a man whose sum artistic output has been I Need Love, Mama Said Knock You Out and NCIS: Los Angeles on the same level as Fred Astaire, Richard Rodgers, Lucille Ball or Cicely Tyson.

First, let's look at Cher.  What major cultural contributions does Cher really have?  I Got You Babe was done with Sonny.  Yes, she had hit songs: Gypsies, Tramps & Thieves, If I Could Turn Back Time, Believe. She's done good work on film such as in Silkwood and Moonstruck.  However, there's still something amiss about placing Cher as among the truly greats.

It's interesting that Cher receives a Kennedy Center Honor but has yet to be inducted into the Rock & Roll Hall of Fame.  Normally, it's the other way round.

I may be talking my way into finding a tortured logic to Cher's inclusion to a special recognition people like Peter O'Toole and Olivia de Havilland never got.  I'm willing to listen to a case being made for Cher, though I still would right now vote 'no' into putting her among the truly great artists of the Twentieth/Twenty-First Century. 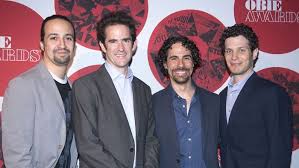 Even if I could reluctantly agree to include Cher, honoring 'the creators of Hamilton' is appalling.  As has been pointed out, this would be the third time that an honoree is tied to a musical work at the Kennedy Center.  Carole King was honored during the Kennedy Center's run of Beautiful: The Carole King Musical, and Gloria Estefan was honored just before On Your Feet! opened there.

However, in both those cases King and Estefan had long careers behind them to back up their selection. People today can sing many of their songs.  Exactly how many hit/popular songs has Miranda actually written?

People aren't singing the songs from Moana the same way they sing them from The Lion King or Beauty and the Beast or Phantom of the Opera or Evita or Fiddler on the Roof among others.  Far be it for me to question Miranda's musical genius, but I'm going to guess that Oscar Hammerstein II, Lorenz Hart, Cole Porter, Irving Berlin, Fred Ebb, George M. Cohan, Stephen Sondheim, Alan Jay Lerner, Jerry Herman and Ira Gershwin probably could have come up with a better rhyme to 'Shiny' than 'Hiney'.

I'm going to pick on Miranda just a touch.  His musical output, at least on Broadway, has been three major works: In the Heights, Bring It On and Hamilton.  Compare that to Oklahoma!, Cabaret, My Fair Lady, or West Side Story, all of which I would argue are better and have had and continue to have a greater impact on theater than Miranda's work save perhaps for Hamilton.

However, I would argue that at a mere three years old, it is far too soon to declare Hamilton to be the 'Citizen Kane' of musical theater, the most groundbreaking work to hit The Great White Way.  It may be a good show.  It may be a great show.  However, to declare it among the greatest musicals of all time...let's just wait and see.

I'd like to see it, but curiously enough, even though Hamilton was made for 'the common man' with its raps and non-traditional casting, I cannot afford a ticket.

The Kennedy Center Honors were meant to be a lifetime achievement award, not a salute to the newest 'In Thing'.  I'm genuinely surprised they didn't go out and honor 'the creators of The Book of Mormon', which is only four years older than Hamilton.  Anyone remember how wild everyone was for that musical spoof of the Latter-Day Saints?

Again, it might be great.  However, will it really have the same impact something like Show Boat or The Sound of Music or Hello, Dolly! had and continues to have?  Will it really be remembered and performed decades after it took Broadway by storm, or will it be relegated to be with such Best Musical Tony winners like The Mystery of Edwin Drood, Contact, Fiorello! or Redhead (and I ain't talking about Annie)?

Again, I have nothing against Hamilton itself.  What I do have something against is in taking an award that is meant for 'lifetime achievement' and throw it a group of people who simply do not have the creative body of work to merit it.  The Kennedy Center insists it is honoring the musical itself because of 'its enormous influence'.  OK, let's test that out.

Exactly how many songs from Hamilton have become mainstays of popular music?  A person can still sing Old Man River, Oh What a Beautiful Morning, Someone to Watch Over Me, Climb Every Mountain, One (Singular Sensation), Willkommen, Memory, Don't Cry for Me Argentina, If I Were A Rich Man, or It's a Hard Knock Life among others, but how often do we hear My Shot or Cabinet Battle #1 sung on the street where you live?  I bet more people can sing songs from Oliver! than they can from Hamilton.

From my vantage point, honoring 'the creators of Hamilton' is an embarrassment because it makes a mockery of the KCH's stated goals.  It is instead a desperate ratings and cash grab by latching on to something that is wildly popular in some circles with the hopes of getting more attention.  There is no case that can be made to single out this particular musical for a 'lifetime achievement' award.

I would watch the salutes to Glass, McEntire and Shorter, maybe the one for Cher, but with its inclusion of 'Hamilton: An American Musical', the Kennedy Center Honors now has opted not to salute individuals or even bands (something I still find dubious).  Now it has decided to salute non-living objects.

It's laughable. It's embarrassing.  It's ridiculous. It's all over.

I look forward to seeing Kennedy Center Honoree SpongeBob SquarePants next year.
Posted by Rick at 10:17 AM