Madonna of the Seven Moons: A Review


MADONNA OF THE SEVEN MOONS

Madonna of the Seven Moons starts in one direction and then veers into new territory of the times it was made. Perhaps a bit theatrical, one can cut the film some slack given the time and place it was made.  However, one also can admire, even respect the fact that a hereto little-known subject was given a cinematic treatment.

Maddalena (Phyllis Calvert) is an innocent convent girl who in the opening scene is raped (though the actual rape is never shown, just implied).  Soon after, she is sent by her father to marry Guiseppe Labardi (John Stuart), whom she's never met.  However, from all appearances Mr. and Madam Labardi genuinely love each other and their daughter, Angela (Patricia Roc).

Angela now comes down from England back to Italy for her 21st birthday.  Maddalena is thrilled her child is coming, but is soon shocked by her breeze, more liberated manner.  She's equally shocked to find that her traveling companion 'Evelyn' is not a girl, but a man (Alan Haines).  Maddalena is a refined society lady, but she also is troubled, sometimes going into trances and behaving curiously.  She also disappeared for at least a year, something Mr. Labardi is keeping a closely guarded secret.  Not even family friend Dr. Logan (Reginald Tate) can get the truth, let alone Angela.

Angela is not just celebrating a birthday.  She has accepted Evelyn's marriage proposal.  This thrills their mutual friends, artist Jimmy Logan (Peter Murray-Hill) and his wife Nesta (Dulcie Gray).  Jimmy has heard of Madam Labardi's great beauty and yearns to paint her, but he has no idea what she actually looks like.  He hopes to see her at Angela's party, but it's the sight of someone only Angela likes that sends Madam Labardi into a tailspin.

A guest at the party is Sandro Barucci (Peter Glenville).  A ne'er-do-well and gigolo, he eases his way into this upper-crust world, much to Evelyn's disdain.  Upon seeing him, Madam Labardi appears to have vague memories of another world come at her and faints.  Once she awakens, however, the little moments of confusion burst open, and she becomes another person altogether.  With a slightly maniacal laugh she takes a handful of jewelry, dresses as a peasant and leaves her estate, leaving as her only clue a drawing in lipstick of seven moons. 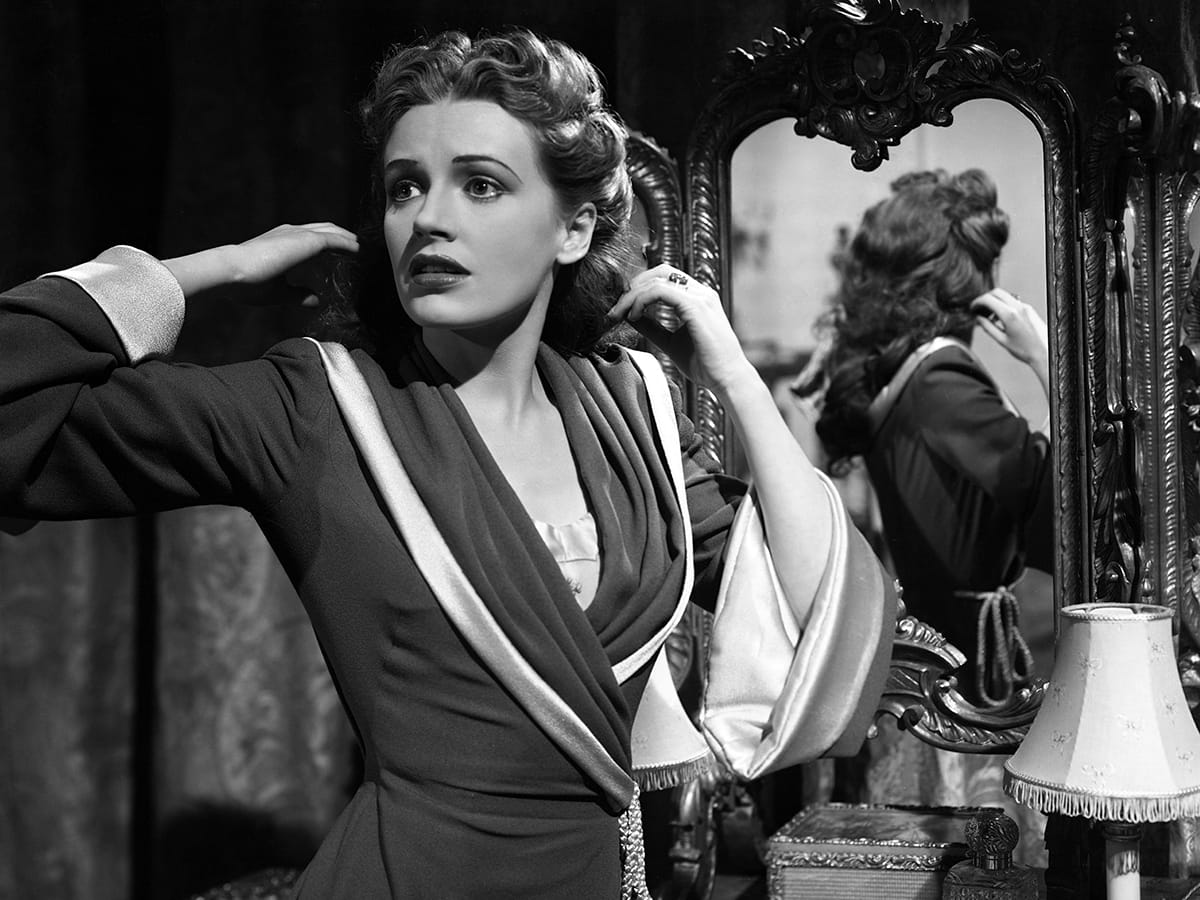 Soon after, 'Rosanna' returns to Florence, where she is embraced by her on-off again lover Nino (Stewart Granger), who is also Sandro's brother. Nino is the local tough who rules the neighborhood of The Seven Moons, living off of crime.  Nino tosses aside his current mistress Victoria (Jean Kent) to take up with Rosanna again, who has brought with her valuable jewels.

No one is aware that 'Rosanna' and 'Maddalena' is the same woman.

Nino, inspired by his passion for 'Rosanna', decides to get out of petty crime and lead his gang to strike at major heists.  Sandro, for his part, wants to lure Angela into his own web.  An unexpected opportunity arises when Angela begins to do her own investigation into her mother's disappearance, which leads her to Florence.

Soon the various clues start coming together: Jimmy having sketched a drawing of the gang with Sandro's telltale ring, Sandro recognizing the drawing as that of 'the Seven Moons', Rosanna's own contradictory nature (scoffing at religion yet drawn to faith in the way Maddalena was a firm believer). Things culminate at Carnival, where under the guise of helping Angela contact someone with information on Maddalena, he lures her to the Seven Moons.

Sandro drugs Angela, with nefarious plans to assault her.  Nino plans to rob the Labardi estate and perhaps kill Mr. Labardi, especially since upon discovering the jewels are from the Labardi family, has convinced himself that Rosanna didn't steal the jewels but got them by being Labardi's mistress. Rosanna, similarly convinced by Victoria that Nino's cheating on her, looks for him.

Part of the plan for the robbery is that everyone wear the same costume, leading to a series of mistaken identities, tragedies and deaths, including the Madonna of the Seven Moons, who dies unaware of both her other self and her lover.  He in turn sees the truth and leaves heartbroken.

Long before Sybil or The Three Faces of Eve, Madonna of the Seven Moons tackled the issue of multiple personality disorder, though I believe dissociate identity disorder is now the correct terminology.  I think the second is more apt for Maddalena's condition, as she had only two identities with one identity unaware of the other.

Her 'dominant' identity is of Maddalena, respectable upper-class married lady.  It's only when something triggers her that she becomes 'Rosanna', a fiery lower-class tart.

The film was wise to open with Maddalena's rape, though again it is the score and the metaphorical falling of the flowers.  As such, we are already aware of the probable cause of her dissociate identity disorder, something that was probably far ahead of its time.  The adaptation of Margary Lawrence's novel by Roland Pertwee also did well in including disparate elements within the character, such as how one personality had great religious faith while the other didn't but was 'triggered' by a religious procession, as if something about that was within her but she could not place it.

As Calvert has to play two 'characters': the elegant, somewhat prudish Maddalena and the more earthy Rosanna, she had a chance to showcase her range.  Calvert did a pretty good job, though I would say more as Rosanna than as Maddalena, where she was given to doing more posing and being slightly theatrical.

Granger, I think, did his best to be this tough Italian hood, but with his diction, voice and manner, it came across as slightly comical to imagine this rather posh and elegant man as this lowlife hood.  It brought to mind an episode of Are You Being Served?, where the effeminate Mr. Humphreys attempted to pass himself off as an Italian mobster.  In that episode, it was obviously played for laughs, but in Madonna of the Seven Moons, it was meant to be played straight.

Somehow it didn't work, and Granger looked out of place.  At least Hilda Bayly as Mrs. Fiske was meant to be comic relief, but Granger just came across as sometimes comical.

This at times plagues some of the other actors who also seem to be excessively dramatic, but I put it also to director Arthur Crabtree, who had little to no experience in directing when he made Madonna of the Seven Moons.

His background in cinematography however helped in the visuals, for the film at times is quite beautiful.  Of particular note is when Rosanna has crosses in her eyes, metaphorically and almost literally bringing back the faith of Maddalena to her mind.

Some things were a bit confusing, as when Sandro suggests that Angela was his literal partner in crime before she went off to Florence.  Other things seem like wild coincidences, like Sandro knowing of Rosanna and Angela.  Finally, other aspects, such as Nesta's stutter, were brought up never to be mentioned again.

Still, Madonna of the Seven Moons is an intriguing film that looks at the psychological effects of dissociate personality disorder in a non-sensational manner while still having an interesting whodunit mystery.  Granted, some of the acting seems a bit excessive, but on the whole, it makes for most interesting viewing.