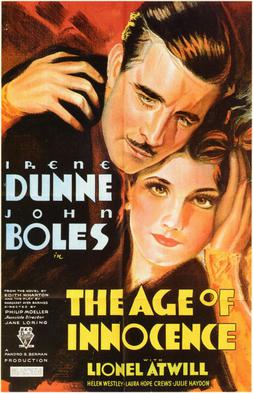 Before Martin Scorsese took on Edith Wharton's novel of love among the Gilded Age elite in a more celebrated film version, we have a previous adaptation that technically is a remake of a now-lost film. The 1934 version of The Age of Innocence is a somewhat stilted affair, but given it was made during the Production Code era and with Irene Dunne, I can cut it some slack.

Told primarily in flashback from a Jazz Era setting, elderly Newland Archer (John Boles) tells his grandson Dallas (Kane Richmond) of an earlier time when the family was close to being caught up in scandal.

It was when Archer was engaged to May Welland (Julie Haydon), a sweet girl.  Archer and May seem ideal, but then comes May's cousin, Ellen, Countess Olenska (Dunne), who remembers Newland too.  The Countess has returned from Europe where she was the source of talk, and she has returned home with the hope of obtaining a divorce.  Ellen's family isn't particularly pleased by this, but she is family and has a champion in her witty, cheerful Granny Mingott (Helen Westley).

Newland bows to society pressure and as Ellen's attorney urges her to remain married to keep up appearances.  Ellen agrees, but Newland sees how miserable she is and soon has several changes of heart.  The first involves how women are being held back, the second is in how he's in love with this fascinating woman.  Ellen is being squired by notorious playboy Julius Beaufort (Lionel Atwill), who seems amused by everything, though both put up a semblance of a respectable front.

Soon, Ellen and Newland are in love, but society and Newland's own dithering keep them apart.  Ellen resists Newland's overtures of love, and just when she appears to finally agree to run off, May comes back to tell Archer she has agreed to speed up the wedding.  Ellen, heartbroken, wishes her cousin well and decides to return to Europe.

Now back to the present, Dallas informs his grandfather that the Countess has returned to New York and he leaves Newland outside her apartment.  Newland Archer looks up at the window, and walks away.

Perhaps one of the first mistakes The Age of Innocence makes is in having this framing story of the Roaring Twenties. I don't think it was necessary, and moreover, the opening sequence with jazz clubs, speakeasies and loud music is very jarring given the genteel nature of this story.

Add to that the change of setting to contemporary New York and one wonders whether the studio trusted the source material or felt it needed a little more 'jazzing up' to please audiences.

Director Philip Moeller and screenwriters Sarah Y. Mason and Victor Heerman also seemed unclear about May.  As performed by Haydon, she comes across as a hopeless ninny, which I figure is correct, but when she returns to move up the wedding the film appears to hedge its bets by hinting that it was done out of spite or maybe excessive enthusiasm.  It's as if they wanted to make our dimwitted May suddenly calculating and not simultaneously.

Dunne was for the most part divine as this lovelorn, scandalous woman.  The heartbreak she had when seeing May and Newland walk down the aisle is beautiful.  Sometimes it did seem she was slightly exaggerated in showing  how in love she was with Archer, but here, I'm not blaming her.

I'm blaming Boles, who comes across as stiff and boring and not worthy of May, let alone the Countess.  It's bad enough Boles made Newland Archer into a wet blanket, but he seemed wildly out of place in this particular age.  His wardrobe looked more appropriate to the Twenties than the turn of the century, making things more odd.

Atwill was having a ball in his small role of a rascal who delighted in stirring up trouble, but he sadly disappears from the film.  He could have done more with his rakish figure, but he did quite well given the limits of the part.

The real scene-stealer was Westley as Granny: feisty, blunt and generally knowing, she was also sweet and endearing, a woman who loved but also didn't suffer fools gladly.  She was both the comic relief and heart of The Age of Innocence, to where you are moved when you see Granny cry at Ellen's departure.

Max Steiner's score was sadly lacking here, given there wasn't much music and the opening seemed ill-fitting to this tale of thwarted love.

This version of The Age of Innocence is a curiosity, more reflective of the times it was made than the time it was set.  It would be good for an Irene Dunne fan, but it is one of her weaker performances and not worthy of the Wharton novel.