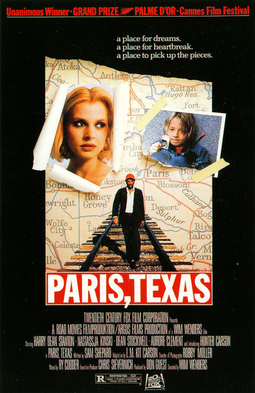 To be honest, I started despairing where Paris, Texas would take me.  I was finding it a little too eccentric for my own tastes.  However, once we got to the end, with two standout performances by Harry Dean Stanton and Nastassja Kinski, I found that perhaps Paris, Texas' reputation is well-earned.

A man is found wandering the West Texas desert.  Soon, we learn that this man is named Travis (Stanton), and his brother Walt (Dean Stockwell), whose number Travis carried despite Travis not speaking, goes down to get him.  Travis is mute for a while, until he finally speaks the word 'Paris'.  From this, we learn that Travis has bought a piece of land in Paris, Texas, the place he believes he was conceived and which he takes a most reluctant Walt to.

Eventually, Walt gets his brother to come back with him to Los Angeles, where Travis re-encounters Walt's wife Anne (Aurore Clement) and seven-year-old Hunter (Hunter Carson).  Hunter calls Walt and Anne 'Dad' and 'Mom', but in reality, he is their nephew as Travis is Hunter's real father.  Travis, eccentric in his manner, starts working to bond with the son who doesn't know him, and eventually wins his trust and affection.

Travis decides he should meet with Jane (Kinski), Hunter's mother, and he finds that Jane has been sending money for Hunter from Houston.  Travis goes to Houston, though I cannot remember if it was his idea to bring Hunter with him or if Hunter came of his own initiative.  Travelling to Houston, they stake out a bank and Hunter sees the woman he knows is his mother.

Following her vehicle, Travis finds she works in a peep show, something Hunter is oblivious to.  Travis finds the right show and at first cannot bring himself to communicate with her.  He goes back the next time though, and bares his soul to Jane, who eventually realizes who he is as he recounts their story: the good, bad and ugly.  Telling her where Hunter is, Jane goes and sees her son for the first time, and while Travis sees them from the parking garage, he leaves.

I don't even think we get any moment when they either see that Travis and Hunter may have both gone off the deep end or are resigned to let them make their own quest.

As such, I felt Paris, Texas was going a little off, as if I were watching a precursor to Rain Man with Travis and Walt.

However, it isn't until Wim Wenders' directing and Sam Shepard's screenplay give us a very emotional scene at the peep show between Stanton and Kinski that we see why so many hold Paris, Texas close to their hearts.

It's an extremely long sequence for Stanton and Kinski, the former speaking and the latter reacting.  We hear in Stanton's voice the pain and sorrow of a man filled with regret and seeking redemption in an unlikely place, and we see in Kinski's face the hurt of the past and the acknowledgment that he who sinned against her is here to atone.

The age discrepancy between Stanton and Kinski (he was 58, she 23) was addressed in the monologue, and it's to Stanton's credit that he played it as if Travis knew it was a bit out-of-the-ordinary. There was no effort to make it a fiery love or a daddy-complex one, just two people who found each other.

Certain moments visually almost seem to put them, to coin a phrase, faraway so close. They are in an intimate setting, but are still separated.  They can hear and see each other but cannot touch.  The hurt, the pain, the regret and a tinge of hope are all there in their performances.

Paris, Texas is really Harry Dean Stanton's show, and he does so much with it that I can see why he became a bit of a cult figure among a group of cinephiles.   From when he attempts to attract Hunter's attention by trying different kinds of walks to his soul-baring sequence, Stanton delivers what is probably one of if not his defining performance.

Though we don't see Kinski until near the end of the film save for a scene where she's in a home movie, she too does a heartbreaking performance as Jane, who is a very nice girl but who in her own way is terribly haunted by that child she longs for.

Stockwell and Clement, though given smaller roles, are real and realistic as Walt and Anne, who function as well as they can with the curious circumstances they find themselves in.

I admit that at times I was put off by Paris, Texas, what with a strange similarity to Rain Man in the 'estranged brothers, one of whom is a bit eccentric, take to the road' story (even if Paris, Texas long proceeds Rain Man). I thought the film was going nowhere and had a touch of magical realism with Travis & Hunter's search for Hunter's mother.

However, it is almost impossible not to react emotionally to that long sequence between Stanton and Kinski, among the most moving I have seen.

In a certain way, Paris, Texas echoes something from Casablanca, the sense that for some, the phrase 'we'll always have Paris' does not necessarily mean the joy of love.  It could also mean the pain of love, as well as the possibility of redemption.