In the myriad of films, television and stage productions revolving around the Titanic sinking, none has been as notorious as the 1943 film version. The reason for this is simple: Titanic was made as Nazi propaganda, finding new life as Soviet propaganda after the war. Heavily censored even by its Nazi makers, it is now available in its original version.

Titanic is overt in both its propaganda and dramatics, at times comically so. It's also wildly and comically historically inaccurate. However, as a piece of film history, it is a most interesting experience, with some surprisingly strong moments.

The greedy 'Sir Bruce Ismay' (E. F. Furbringer) has seen the White Star Line stock plummet, and he and his equally greedy stock-owners scheme to take advantage of the falling shares to make a quick killing once the price goes back up. As part of that scheme, Sir Bruce will push Captain Smith (Otto Wernicke) to keep Titanic steaming at full speed in order to make its landing in New York a day early. By doing that, the ship will win the Blue Ribbon...and the worth of their shares will go up.

There's manicurist Hedy (Monika Burg), who strikes up a romance with Franz Gruber (Hermann Brix), first violinist of the Titanic orchestra. There are some Germans in steerage, among them the alluring Marcia (Jolly Bohnert), who teases and tantalizes two friends/brothers (Titanic never seems to establish what exactly these two men were to each other). Why a German had to fill in for an Englishman the film really does not spend time on.

Petersen is the only person aboard who takes his job seriously. He is also the only man brave enough to stand up to the capitalist Sir Bruce in his selfish and greedy efforts to thwart good seamanship. Smith easily gives in to Ismay's efforts to make Titanic go faster, and he also deliberately ignores ice warnings, something that appalls Petersen.

Petersen, however, has an ounce of humanity with regards Madam Olinsky, with whom Titanic suggests there was a past relationship. Being German, of course he isn't going to show overt romantic or sexual desires, but there appears talk of 'Cairo'.

Anyway, Titanic sails on. The elite British dance long into the night in their finery, and even steerage gets entertained via a danse erotique from Marcia, which causes two men to break out into fighting. Then, despite Petersen's repeated warnings, the ship strikes an iceberg.

Ismay being Ismay shows he's not just a coward but still obsessed with money. He attempts to bribe Petersen into letting him get into a lifeboat, but the noble German won't budge an inch. Ismay and Astor, right up to the end, continue wheeling and dealing, oblivious to the dying going on about them.

Olinsky finds her courage and begins saving people, while two steerage passengers, John and Anne, are separated after seeing steerage descend into chaos. Petersen, seeing this noble woman put others ahead of herself, gives her his coat and puts her aboard a lifeboat.  He continues in his duties until the end, when he is rescued by Olinsky's lifeboat.

At the Court of Inquiry, Anne finds John, who is awoken from his shell-shock. To Petersen's immense anger, Sir Bruce (who had survived the disaster) is acquitted of all responsibility.  Titanic ends with this postscript: "The deaths of 1500 people remains unatoned for, an eternal condemnation of England's quest for profit". 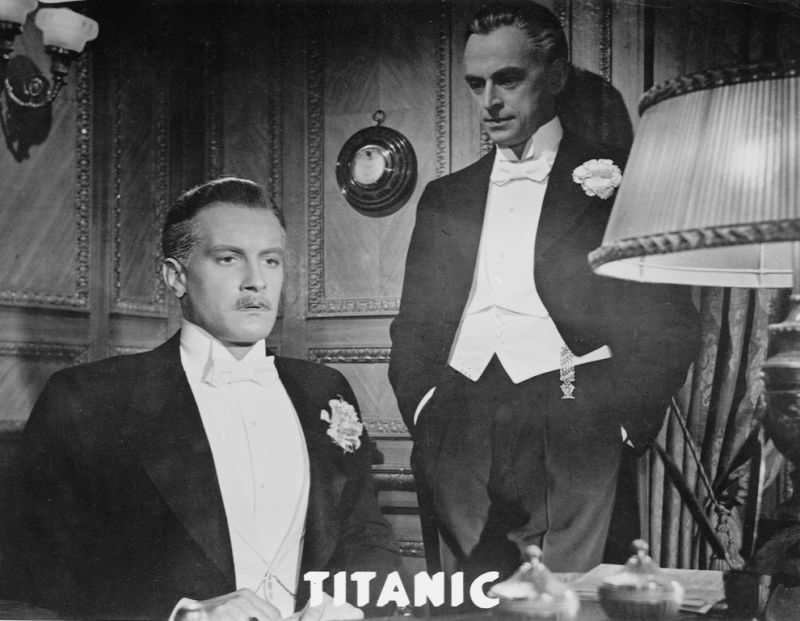 It is pretty much impossible to divorce Titanic the film from its origins. As such, one who knows its history and purpose is hard-pressed to see the film as anything other than Nazi propaganda. However, I will do my best to examine it as a film alone.

Doing so, I see that Titanic is in many ways a laughable production. Some of the acting is so over-the-top it borders on spoof.  The subplot of Anne and John is illogical only in that one does not get to know them, and Lieselott Klinger's performance as Anne is so overly-dramatic it's hard not to laugh at her theatrics. The other performances were not much better. I cut some slack to Nielsen and Schmitz in that their characters were not very dimensional. I have to admit Furbringer played evil quite well.

There are other subplots, such as Marcia and the 'Cuban thief' Mendoz (Werner Scharf) that similarly just seem to be there to be there. The film does not justify their existence.

However, Mendoz and one of the men who fought for Marcia's affections are trapped in the informal jail cell as Titanic sinks, with the other man running about the ship in order to save his friend/brother. Is that a call-out from one Titanic to another that I see?

Titanic's only really good story is that between Hedy and Franz in that they seem to be genuinely nice people who fall quickly in love. If Titanic had had any interest in being about the lives lost aboard the doomed ship, a greater focus on these two would have been the route to follow.

Titanic, however, was not interest in such things. Otherwise, it would have also given Petersen and Olinsky's personal story more attention. It might have made Petersen into a more human character too, but now I digress. Titanic, instead, was about one thing: the greed of the British versus the nobility of the German. "Money is the only value I believe in," Astor comments to his own wife, but he got off easy. It is the villain "Sir Bruce" who gets the worst of it (though one has never sympathized with Ismay); he not only bargains with Astor over money as the ship sinks but also turns to Olisky despite having his 'mistress' next to him.

Titanic was also disinterested in historical accuracy. J. Bruce Ismay was never knighted, let alone knighted before the ship sailed. Lady Astor was not some grande dame but 19-years-old who was five months pregnant when Titanic sank and she was left a widow. There was no grand ball as the ship struck the iceberg, let alone after. There was no 'military-style' band playing as the ship sank.

Those are the bits I can recall, but Titanic it should always be remembered was not about history but about an agenda.

However, there is a good element in Titanic: the growing chaos aboard. The scenes where the passengers, steerage and elite, have to fend for themselves after Captain Smith says "Every man for himself" have moments of genuine panic. One can see why Goebbels banned Titanic shortly after its completion, for the sequences of terrified passengers fighting to stay alive would evoke the realities of Allied bombings.

As a side note, was I wrong in thinking at the scene where men and women/children are separated in steerage that Germans would be quite efficient at such separating them by this point?

There is also a wonderful POV shot of Olinsky looking up at Petersen as her lifeboat starts its descent.  The director(s) Herbert Selpin (who "committed suicide" before the film was completed) and Werner Klingler (who completed the film) even managed to sneak in a touch of humor. During Marcia's danse erotique, even the old man who serves as a father-figure seems aroused.

Finally, there is a genuine moment of pathos in Titanic. One of the telegraph operators, knowing he is doomed, releases his beloved pet bird as we hear the band play Nearer, My God to Thee. It's the rare moment of humanity the film offers.

Titanic is an interesting film from a historic viewpoint on how state-sponsored cinema was used as a tool for the State. It found new life as a state-sponsored tool with its anti-capitalist message in East Germany and other Soviet bloc states. As a film, Titanic is at times overly dramatic with not much in terms of character development, shirking some potential stories in order to pass its message. However, the scenes of panic among the passengers holds up pretty well.

Tainted by its association with evil, Titanic is at least not overtly propaganistic. It's not a film I would recommend for entertainment, let alone accuracy, but as one for showing the power of cinema to sway an audience.