NO COUNTRY FOR OLD MEN

I remember when I went to see No Country For Old Men with my late friend Fidel Gomez, Jr. The audience was not interested in this tale of greed and human misery.

Two couples walked out, another couple was dead-asleep, and one woman at the end shouted, "I WANT MY MONEY BACK!". Clearly, despite the lavish praise the film received, the audience I was with was displeased.

For myself, I thought No Country For Old Men was boring, pretentious and a nightmare to sit through. Now, at last, I revisit this tale to see if again my views have shifted in the eleven years since it was released.

My views have not changed: No Country For Old Men is a film one can admire, even respect, without actually liking.

West Texas, 1980. A killer just murdered a deputy sheriff thanks to not putting him in a jail cell and having his back to him. This killer then kills a random passerby with a captive bolt pistol and takes his car.

Somewhere else, a hunter comes upon a drug deal gone horribly wrong. There are bodies everywhere, and one of the last survivors begs for 'agua' (water). The hunter tells him he has no water and turns to find someone who left the scene. He comes upon the last man, who is dead, and two million dollars in a satchel.

He takes the money, but in a fateful turn, his conscience gets to him and he goes back to give the man water.

At this point, I have two points of logic. First, a guy killed a cop...IN TEXAS...and no one seems interested in catching a cop killer. Second, why a man who left someone to die by bleeding to death would imagine that man would still be alive to drink water I cannot guess.

As it stands, this man, Llewelyn Moss (Josh Brolin) goes back at night and finds himself found by more drug dealers. He flees and warns his wife Carla Jean (Kelly Macdonald) to go to Odessa and her mother.

Eventually, the killer, who is Anton Chigurh (Javier Bardem) is hired to find the money/Moss. Chigurh is relentless, and not even the warnings of Carson Wells (Woody Harrelson) who also finds Moss in Mexico recovering from "Sugar's" attempted killing is enough to stop Moss from taking Chigurh on.

Things come to a head in El Paso, where the characters meet for a final confrontation.

All this is watched over and commented on by Sheriff Ed Tom Bell (Tommy Lee Jones), who ultimately retires, as the shocking nature of Chigurh shows this is 'no country for old men'. 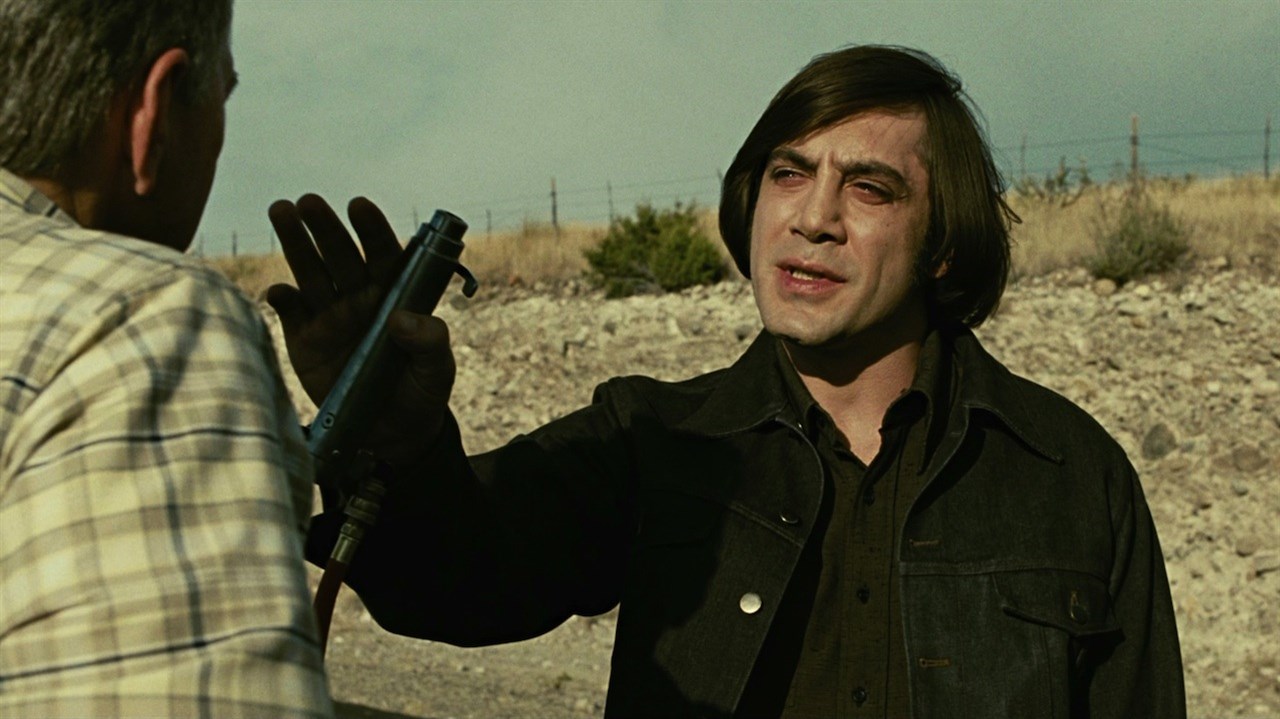 I know I am that lonely voice in the West Texas desert when it comes to No Country for Old Men. I know that even some of my readers think the world of the film hold it as a monumental achievement in cinema, a true masterpiece.  That is their right.

It is also my right to call No Country for Old Men a pile of crap, a film I still detest and wouldn't sit through even if I were paid to.

Now, to be fair, I have never embraced the Coen Brothers as much as my brethren. I am not a 'Coen-Head', as I lovingly call their fans. I find them an acquired taste, one that I have not acquired. Take that under consideration as I say why I still do not like No Country for Old Men.

What I have issue with when it comes to the film is how passive everyone is. Right from the get-go where Chigurh kills this random stranger, no one ever seems able to take any kind of stand. Chigurh kills around 15 people in No Country for Old Men, and I say 'around' because some of them were not seen.

Also, one is not certain if in the end he killed Carla Jean, as she refused to "call heads or tails".  However, what I saw in this scene is what I figure the Coens were going for: making statements than having reality. I figure that in many of these circumstances people would not passively, almost meekly, take to being killed.

However, no one ever tries to run or fight back. I know...it's to show how monstrous and menacing Chigurh is, how like some golem he comes after you and won't stop. Fine, have your symbolism. I just didn't accept it.

No matter how hard I tried, and I did try, I could not accept the premise or world of No Country for Old Men.

The moments that I'm told were meant to be tense and gripping, such as the "Friendo" scene where Chigurh menaces a convenience store clerk who manages to survive, were instead moments that I found hilarious to being almost spoofs. From the hushed delivery to the dialogue that I'm sure is meant to be clever and incredible but that I found more comic, I simply could not get into this world.

The curious thing is, I live in this world, as I am from West Texas. I know this world a bit, albeit it was just before my time. As such, I could not see the world I know in the world of No Country for Old Men.

The general passivity of the characters speaks for the performances. I know Bardem is lauded for his merciless, unstoppable human Terminator, but again I found him more hilarious than frightening. It is more than his Prince Valiant hairstyle. Whenever he sounds 'menacing', part of me wanted to say, 'stop growling your lines'.

Apart from Jones I genuinely did not care about these characters, let alone believed them to exist in any world.

I know many will tell me that I don't "get" it, that I miss the symbolism and esoteric meaning by being too literal. I would say, 'No, I'm not missing much if anything'. I can even tell you that the corrido the Mexicans are singing to the bleeding Llewelyn reflects the story.

Translated, it goes 'You wanted to fly without wings, you wanted to touch the sky, you wanted much wealth, you wanted to play with fire'. It describes Llewelyn: someone who wanted the money and now finds himself in a hell of his own making.

I do get it. I can even appreciate what it it going for. That does not mean I have to like it, let alone recommend it.

I have three criteria for measuring the success of a Best Picture winner: is it a good movie, has it stood/will it stand the test of time and would I watch it again. When it comes to No Country for Old Men, my answers are "No, Maybe, Leaning No and Hell to the No".

2008 Best Picture Winner: Slumdog Millionaire
Posted by Rick at 6:14 AM