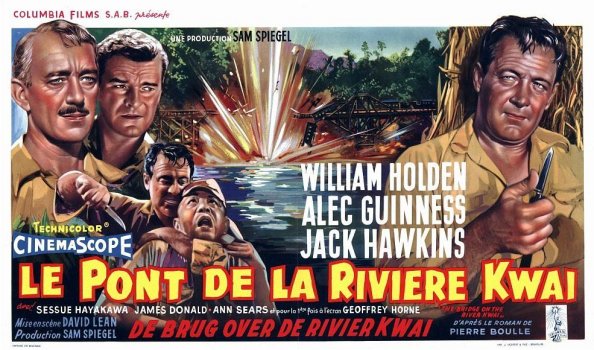 THE BRIDGE ON THE RIVER KWAI

War Is Madness, Madness Is War...

Cynical American Navy Commander Shears (William Holden) is living by his wits in a Japanese prisoner-of-war camp in Asia. He is biding his time before making an escape from Camp 16, run by Colonel Saito (Sessue Hayakawa). As camp commandants go Saito is no different then others: he's not sadistic but he is not benevolent either.

Into the camp come the newest prisoners of war, a group of British soldiers led by Colonel Nicholson (Alec Guinness). The by-the-book Nicholson is determined to keep the British end up and follow the rules of war no matter what.

Among the rules he will not break is the idea that officers work as slave labor along with enlisted men, a violation of the Geneva Convention. Saito is simultaneously appalled and angered at what he considers nonsense. He insists there are no rules and demands Nicholson and his fellow officers work. Nicholson, as leading commander, equally stubbornly refuses. 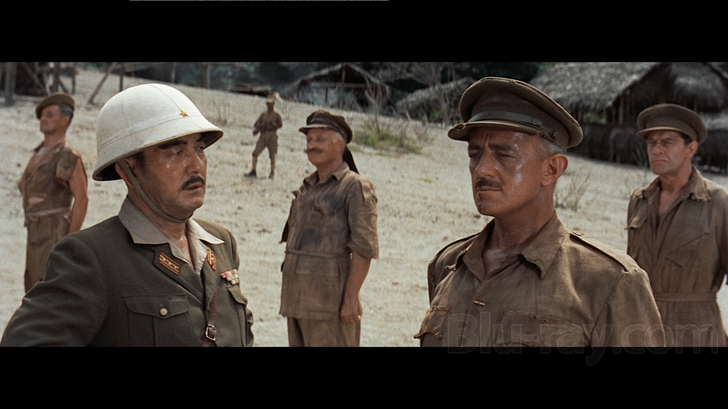 Saito has him locked up, with his other officers locked up separately. Shears is mostly amused by this battle between these two ridiculously stubborn men, but he stays out of their own private war. Saito has more pressing concerns.

Tasked with building a railway bridge in a certain time, he finds himself way behind schedule and worse, with the British soldiers deliberately lousing up the task. Saito is at wit's end. He attempts a charm offensive on Nicholson, seeking a compromise that will allow him to save face. Nicholson, as strict as ever despite his weakened condition, stubbornly holds fast.

Eventually, in desperation, Saito finally gives up, using the excuse of the anniversary of a Japanese victory to grant an amnesty. Nicholson seems triumphant, Saito privately humiliated, and Shears takes advantage of the celebrations to make a daring escape.

Saito, however, got more than he bargained for when it came to Nicholson. Ever the proper and thorough British officer, he decides to put himself of building a proper bridge. Nicholson sees the construction project as a way to keep morale up and restore discipline to his troops, but the medical officer Clipton (James Donald) quietly suggests to Nicholson that them building a bridge that actually works might be construed as collaborating with the enemy.

Nicholson scoffs at this idea, insisting he knows best. Even Saito is astonished, perhaps shocked and even a little appalled at Nicholson's behavior and total obsession. Just about everyone thinks that Nicholson has lost his mind: in desperation to finish the bridge on time, he quietly orders his officers to work alongside the others (the very thing he insisted he would not do). The Japanese are astounded to later see Nicholson essentially raid the sick unit to find workers, and more astounded when he manages to lead a few of them into the labor. 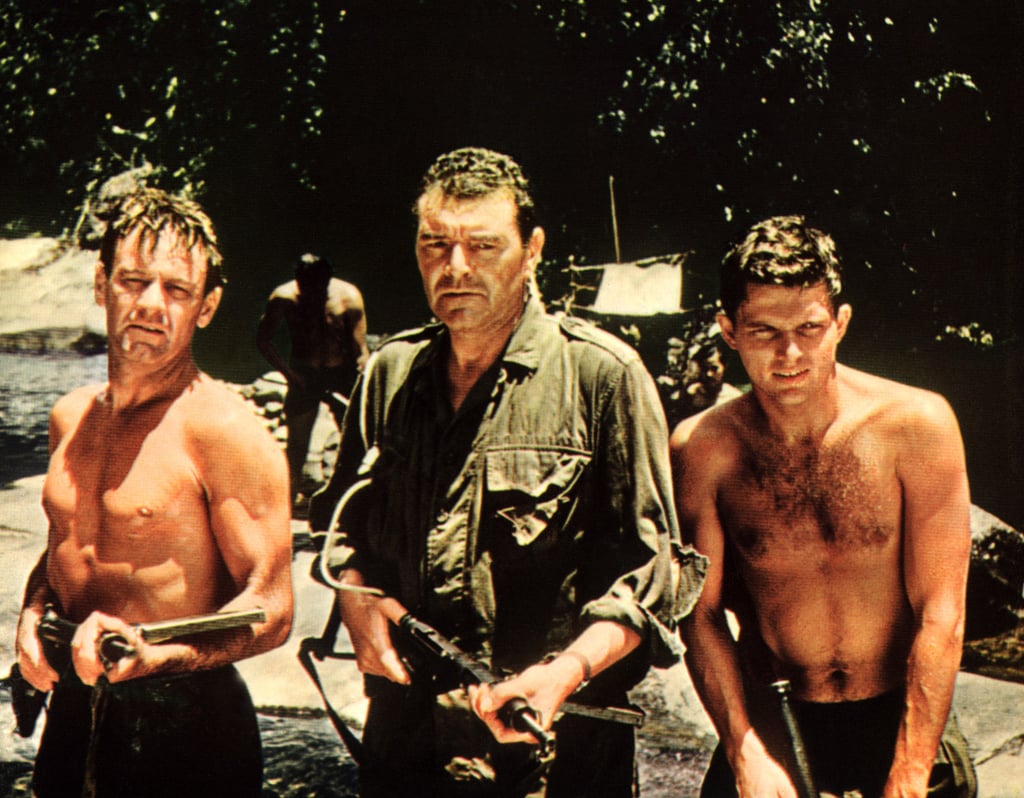 Meanwhile, Shears has survived his escape and is recovering with the help of a beautiful nurse, getting ready to return to the States. He therefore is displeased when he meets Major Warden (Jack Hawkins). Shears has valuable intel about this bridge and is pressed to return to the jungle to help them blow it up. Shears attempts to get out of it by telling them he is not really Shears but an impostor masquerading as an officer.

Unfortunately, this hurts rather than helps Shears, as his false identity is not only already known but used as leverage against him. Reluctantly, he returns to the jungle, with Warden and Lieutenant Joyce (Geoffrey Horne), a young Canadian on his first mission. Trekking through the jungle, Shears essentially becomes redundant to the mission and Warden is injured.

Shears is both appalled and angry, not just at being dragged back into the snake pit but in how Warden, like Nicholson, insists on following protocol and procedure during war. Shears does the worst thing for Warden: he keeps him alive.

Finally arriving at the new bridge, they see its success. Unbeknownst to them, Nicholson and Saito have become, if not buddy-buddies, at least equal partners in the building of the bridge. Nicholson in particular takes great pride in 'his' bridge, while Saito can only marvel at the unintended results of British imperialism for Japanese imperialism.

Things come to a climax when the train at long last is getting closer to the bridge on the River Kwai. The mission to blow it up is in danger of faltering, and this pits Warden/Shears/Joyce against Nicholson/Saito. Nicholson spots the charges at Joyce, who has managed to kill Saito, and furiously & frantically attempts to stop him from blowing up the bridge, even calling for help from the Japanese to stop him.

A skirmish erupts as the train gets closer. After Shears is wounded trying desperately to stop Nicholson, they see each other. The sight of an enraged Shears breathing out his last word, a furious, "YOU!" seems to snap Nicholson into the horror of his actions. "What have I done?" he asks himself.

As he attempts to set the charges himself, Warden's missile injures Nicholson. The mad Colonel has enough strength to fall on the charger, blowing up the bridge as the train is passing with Japanese officials and soldiers.

As Clipton, who declined to be on the bridge and watched all this from further off, comes into all this chaos, he can only snap, "Madness! Madness!" at this sorry spectacle.

The Bridge on the River Kwai, despite its length, never flags or fails to hold your attention. This is because the film is more than an adventure or a war film.

Instead, The Bridge on the River Kwai is about just how insane war itself is, about the men who wage it being unaware of how their actions affect those under them. We see this with Shears, the cynical yet realistic figure who sees that following the rules is not important when it comes to human lives.

We see this in the slowly corroding figure of Colonel Nicholson, brilliantly portrayed by Alec Guinness. Guinness brings almost an innocence to his Colonel, someone we know is not malicious but rather rigid and stubborn to the point of idiocy.

I think many people would see Nicholson as insane, an almost witting collaborator. Some may be tempted to see him as a man of principle done in by his own rigid code.

After seeing The Bridge on the River Kwai again, I think Nicholson was not insane in the clinical sense nor was he, at least in his mind, a collaborator. What he was rather was a man blinded by his own sense of duty, like many leaders well-meaning but so strict and driven by his own ideas that all other considerations were never considered.

Nicholson objects to forming an 'escape committee' due to his legal interpretation that in a technical sense they are not actually prisoners-of-war since they were ordered to surrender (and as such, not really 'soldiers' when they were taken). He decides to build 'a proper bridge' to show British efficiency. He even angrily lectures a soldier for not doing his best in order to thwart the Japanese as being 'bad'. All these indicate that Nicholson's insanity (if it can be called that) came from his myopic view.

Lean and screenwriters Carl Foreman and Michael Wilson* show Nicholson's descent subtly. His insistence that officers work too is done so offhandedly that it almost goes unnoticed. His raid on the medical wing, however, is chilling, the obsession taking on a form of mania. The fact that a few injured men followed their pretty bonkers commander is a sad commentary on how others can go along with clearly irrational acts if they mistake loyalty for love.

Lean punctuates this moment by repeating the same music used when Nicholson is freed. At that first use, it is meant to be triumphant: that of a man besting his enemy by sheer determination. At that second use, it is more cynical and sarcastic, the triumph now gone.

Lean also shows that for all their differences Nicholson and Saito are two of a kind. Both could have gotten their way if they had bent a little, but instead both insisted on total subjugation. All that misery eventually got them to where both wanted the other to go, making things more muddled. Both at one point call the other colonel 'mad', but in reality, neither could see his own insanity.

Hayakawa was equally strong as Saito, driven by his own sense of honor yet finding his frenemy to be at turns an irritant and a useful idiot. Holden is excellent as Shears, a man who only wants to live and who is unconcerned with the craziness around him except when it drags him into things.

Holden is the everyman in this tragedy, the one who just wants to live through this yet finds that all his efforts are for naught whenever his superiors insist on going into inept choices. His best scene is when they parachute into the jungle. Warden essentially tells him that his services are not needed after all, but Warden seems unperturbed by the fact that this man, having endured so much to get out of the jungle, now finds himself a third wheel to something those same superiors insisted he was indispensable.

In turns wry and bubbling with controlled rage, you see Shears almost ready to kill Warden, while the oblivious Warden notes nothing, or at least pretends not to. Later on, Shears, Warden and Joyce get a listen to Tokyo Rose, who ends her broadcast by saying, "Don't forget, don't volunteer for anything". Even Tokyo Rose seems to be mocking Shears.

The Bridge on the River Kwai has a fantastic moment of transition. Contemplating the situation, Dr. Clipton wonders whether both Saito and Nicholson are insane, then looks up and asks, "Or is it the Sun?"; as we see the Sun, we then shift smoothly to a parched Shears, bringing the other story so well into the first.

The Bridge on the River Kwai is pretty much an anti-war film, showing the idiocy and insanity that accompanies it without short-changing the action. It is an epic that also remains intimate amid the explosions. It is above all else, a grand achievement visually and story-wise.

*Originally, the novel's author, Pierre Boulle, was credited for the screenplay and was awarded an Oscar for that. However, Foreman and Wilson wrote the screenplay secretly, as they had been blacklisted and were therefore unable to receive screen credit. Curiously, Boulle did not speak English. It was around 27 years later that Foreman and Wilson received belated credit and Oscar recognition for their work.
Posted by Rick at 1:19 AM