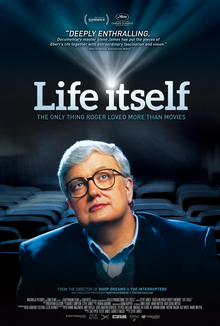 There is not one film reviewer/critic who does not hold Roger Ebert as the standard to whom they measure themselves against. On his death in 2013, I wrote my own Remembrance to this giant of film history and criticism. Now, I revisit his life and work with Life Itself, the documentary based on his memoir that chronicled both his life and his ultimately losing battle with cancer. I confess I was also inspired because of the film of the same name.

One wonders what he would have made of Life Itself or whether he would be displeased it shared the same title. Life Itself, the Ebert story, is to its credit not a hagiography, allowing for some of Ebert's more negative aspects to appear. However, one also sees why so many, both high and low, thought so well of this highly intelligent and fierce man.

Life Itself chronicles Ebert's life, starting with his passion for writing and journalism. As a child, he published his own version of a newspaper, and at his hometown university in Urbana, Illinois, he became the university's editor, known for his professionalism, devotion to the craft and his arrogance.

The bright lights of Chicago beckon, where he joins the staff of the Chicago Sun-Times and essentially has the film review thrown at him. He brings his thoroughness and dedication to this section, but still hangs with the other newspapermen, a rowdy crowd with their regular hangout at O'Rourke's Bar. Here, Ebert holds court, a raconteur as well as a nasty drunk.

He's not shy about touting his own greatness, especially after becoming the first film reviewer to win a Pulitzer Prize. He also dabbles in film-making once, where his admiration for schlock director Russ Meyer leads him to write Beyond the Valley of the Dolls.

If there is one thing Ebert hated, among many, it was the rival newspaper, the Chicago Tribune. The Tribune had its own film critic: Gene Siskel. Siskel was different than Ebert in some ways apart from merely physical. Ebert may have written about life 'beyond the valley of the dolls', but Siskel came close to living in that world, palling around with Hugh Hefner and taking dips with topless girls in the infamous Grotto.

Soon, these two forces were brought together for a local public television program, Coming Soon to a Theater Near You, later retitled both Sneak Previews and Siskel and Ebert.

That last aspect perpetually rankled the at times petulant and egotistical Ebert, but he had lost the coin toss, a way they settled many of their issues. There was strong antagonism between them, yet they found themselves as an unlikely pair. It cannot be said they were friendly, let alone friends, until much later in their association. They became as famous as the subjects they covered and their 'thumbs up/thumbs down' reviews gained a strong influence both in Hollywood and among the general public.

Over time, if not a friendship a genuine respect for each other developed, where they could even laugh at the things that used to irritate one about the other. Siskel's daughters even served as flower-girls at Ebert's wedding at 50 to Chaz, a woman he met at AA (Ebert giving up alcohol in 1979).

Siskel, however, kept his own illness a tightly-held secret. When Siskel died in 1999, it affected Ebert's decision to not keep his own health issues secret as Siskel had. As such, his battle with cancer years later was public, including the surgery that cost Ebert his jaw as well as his ability to speak and eat.

Life Itself intercuts Ebert's life with his battle, where the audience is given the realities of the thyroid cancer such as the feeding via suction, with Chaz always at his side. As he got weaker due to his myriad of health issues, his interaction with the film's director, Steve James, became weaker. Ebert simply did not have the energy to conduct the planned series of email interviews.

Life Itself ends with Ebert's death and the tribute he received at the Chicago Theater, mourned by his family, friends, colleagues and fans. Life Itself does not shy away from Ebert's illness as was his wish, but it might be jarring to viewers to see Ebert not just in such a feeble position but in his actual appearance. The lost jaw creates an almost ghoulish visage that might startle viewers or make them uncomfortable. The feeding via suction, along with the obvious physical toll it took on Ebert and the stress of living through this may put people off.

However, I find that while perhaps a warning to the physical sight of the ravaged Ebert may be necessary, it enhances to my mind Ebert's personal courage in not hiding the ravages his illness inflicted. He was unafraid and honest, even witty and humorous despite the toll.

We do sense that as his illness progressed, he was weakening to a point that if not a desperation at least an exhaustion had finally set in. He could not answer even the slightest question via email, let alone deeper ones. He simply had run his course.

Life Itself has many interviews from current filmmakers such as Martin Scorsese and Werner Herzog, both of whom Ebert championed. We also see Ava DuVernay, who met him as a little girl and for whom he was encouraging in her early film, I Will Follow.

The film does not just shy away from showing us at Ebert's physical worse but also at times at his nastiest and confrontational. Outtakes from Siskel & Ebert show how both of them could be sharp-tongued, insulting, almost hateful towards the other. We can also see that at times Ebert did not take criticism of himself. There was the time Richard Corliss, a fellow film critic, wrote a scathing piece, All Thumbs, disparaging the Siskel & Ebert method. Ebert struck back with his own take, All Stars.

Life Itself is not a hagiography, but it also is not going to delve much into finding much fault with its subject. I found Beyond the Valley of the Dolls a horror, extremely distasteful, but both that film and Ebert's admiration for Meyer were barely if actually touched on. I don't know if it was too late to talk on Ebert's take-down of Ben Lyons, the 'hipper, cuter' (and I would argue, dumber) film critic who eventually took a spot on At the Movies.

Whether Ebert, Siskel or any of those following them in At the Movies (such as Richard Roeper) did in fact get too cozy with their subjects is also left pretty much untouched.

However, this does not take away from both the skill and affection Life Itself has both in terms of filmmaking and the subject himself.

Here, I offer my own take on Roger Ebert.

I disagreed with him, sometimes on films, more often on politics.

I also deeply respect him for his enthusiasm, his genuine love of cinema, the wit and fire he brought to his reviews, good and bad.  I share his view that a film should be viewed and remarked on based on what its trying to do.

Roger Ebert was one of the voices that got me into writing about film. You have to love movies to write about them, but you also have to balance emotion with intellect.

We all stand in his great shadow, and Life Itself is a great tribute to one of the leading lights of film reviewers.