A Soldier's Story: A Review 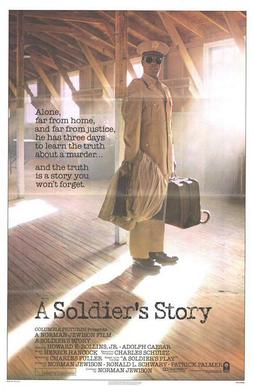 Tynin, Louisiana, 1944. Sergeant Waters (Adolph Caesar) has been murdered, shot near a bridge while he was severely intoxicated. The members of his platoon in this still-segregated Army believe the Klan was responsible. However, there is little to support this theory.

Enter Captain Davenport (Howard E. Rollins, Jr.), the rare African-American officer. He's been brought in to investigate, much to the shock, surprise and even delight of some of the troops. Colonel Nivens (Trey Wilson) ties Davenport's hands by giving him only three days to complete the murder investigation. The more sympathetic Captain Taylor (Dennis Lipscomb) is concerned that a Southern white jury would never convict anyone of killing a black man and sees the investigation as somewhat futile.

Davenport begins questioning the men, who were put together due to them all being former Negro League baseball players. They may not be sent to fight Hitler or Tojo, but they can play baseball. Sergeant Waters has a lackey, Private Wilkie (Art Evans) who is constantly with him even though Waters demoted him from sergeant. Could he be the killer? 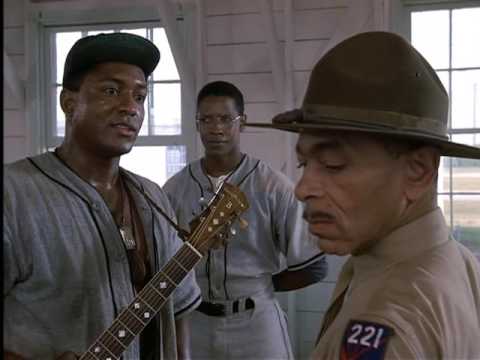 What about Privates Peterson (Denzel Washington), with whom Waters got into a fistfight, or Private Henson (William Allan Young), who similarly disliked Waters? Maybe it was two white officers who admitted they beat up Waters but deny shooting him? There is also Corporal Cobb (David Alan Grier). He was best friends to C.J. Memphis (Larry Riley), a gentle country boy who loved singing the blues and was a masterful baseball player.

The case revolves around C.J., for while Waters likes his athletic skill he's also enraged that Memphis is to his mind a living stereotype that will hold back the 'Negro', especially after the integration Waters feels is coming.  Waters, with Wilkie's help, finds a recently fired pistol under C.J.'s bed, and in his fear punches Waters, whereupon he arrests C.J. for striking an officer.  We learn that it was a set up to frighten C.J., but the simple man ends up committing suicide.

Could the Sergeant's murder have been for revenge?  The case comes to its not-too-surprising but still gripping conclusion, and Captain Taylor happily acknowledges that everyone will soon be under 'Negro' commanding officers. Davenport acknowledges this and the salute of white officers as the black troops finally march off to fight for their country.

A Soldier's Story does not lose the stage trappings from Charles Fuller's play, which he adapted for the screen.  There are several moments when you can almost see A Soldier's Play versus A Soldier's Story when we have two characters talking to each other or having something of a monologue. However, that does not take away from how well the film works in telling its story.

Norman Jewison, who incidentally also made In The Heat of the Night, returns to a racially-charged murder mystery where the twists and turns are more surprising. In a curious real-life turn, Rollins, who plays the investigator in this story, would eventually be cast in a television series based on In The Heat of the Night playing the lead detective role. 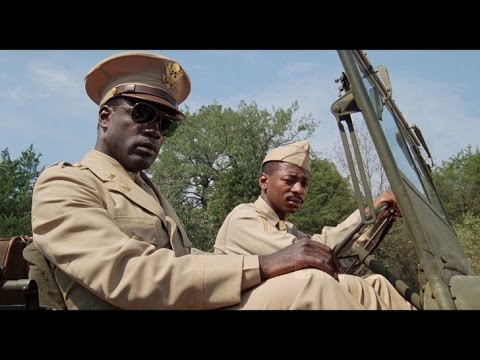 Jewison gets masterful performances from his cast. At the top of the acting accolades is Caesar as the complex, contradictory Waters, a man you love to hate and hate to love, or at least understand. Caesar runs the total gamut of the character, occasionally pleasant but more often times strict, even angry. Yet Caesar also gives us moments of humanity and tragedy with Waters.

He has a monologue where he remembers his time in France during the First World War, where he saw how the white troopers used a simple black trooper to humiliate his fellow black soldiers. His recounting of this horrible moment and the cruel act of retribution Waters took, along with seething anger at the innocent C.J., is both chilling and heartbreaking. While the scene itself can be easily imagined as a play monologue, it works so well thanks to Caesar's performance, Jewison's direction and Fuller's dialogue.

Rollins was more than equal to the task as Davenport, a man who in many ways was what Caesar wanted to be and wanted his troopers to be: educated, erudite and more importantly unafraid. Davenport knew the limitations imposed because of his race but he pushed on, determined to get to the truth. Rollins was exceptionally compelling.

A Soldier's Story also gives us a chance to see some future stars early in their careers. I think many Denzel fans probably don't know of A Soldier's Story, one of his early roles (which, like Caesar, Riley and Young, he recreates from the original stage production). Washington shows the talent that would eventually catapult him to superstar status as Peterson, the one man unafraid to go against Waters.

Better known for comedy, Grier and Robert Townsend as Davenport's driver show they could handle drama, although Townsend was as much of comic relief as we would get with his overly eager and dangerous driver Corporal Ellis. Evans' sycophantic Private Wilkie ultimately receives his just desserts, but not without making him terribly sympathetic and tragic.

Riley not only was empathetic as the innocent C.J. but also had wonderful moments when he sang. An appearance by Miss Patti LaBelle as blues club impresario/singer Big Mary also made the musical moments great. It's no surprise that the music in A Soldier's Story was so good: Herbie Hancock wrote the score, and both Riley and LaBelle wrote the songs either in tandem or separately.

A Soldier's Story is more than a well-acted, well-written murder mystery. It is about the damage internal and external that racism can do to people. "Who gave you the right to judge? To decide who is fit to be a Negro and who is not? Who?", Captain Davenport asks the murderer near the end. It's a devastating question to a remarkable film that really should not be forgotten.