Sky Captain and the World of Tomorrow: A Review 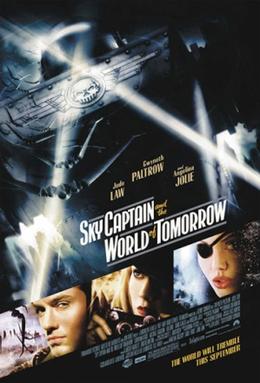 SKY CAPTAIN AND THE WORLD OF TOMORROW

There has been some revisionist history when it comes to Sky Captain and the World of Tomorrow. The film is being held by some as a forgotten piece of cinema history, a movie that was a harbinger for the effects-driven blockbusters of today.

I remember seeing Sky Captain with my late friend, Fidel Gomez, Jr., with me being the more enthusiastic of the two. Fidel was rather cold to the film before we went in. Afterwards, we left with a sense of immense disappointment (and Fidel with a small sense of triumph).

Now, nearly 15 years after its debut, and with Sky Captain receiving belated reevaluations, I figured it was about time for me to revisit the film.

My views have softened a touch, but not enough to recommend it despite the film's best efforts.

In an alternate 1939, a spate of scientists have disappeared. This story comes to Chronicle reporter Polly Perkins (Gwyneth Paltrow). She gets a tip from the last scientist about a nefarious being named 'Totenkopf', some kind of mad scientist bent on doing evil. It is eleven minutes into Sky Captain that giant robots attack New York City, and only 'Sky Captain' aka Joe Sullivan (Jude Law) can stop the onslaught.

Joe and Polly have a past, but right now that has to take a metaphorical and sometimes literal back seat against this menace. An attack on Sky Captain's base leads to the disappearance of plucky sidekick Dex (Giovanni Ribisi), but not before he leaves a clue for 'Cap' and Polly.

Now they gallivant the world to find Dex and stop Totenkopf from whatever he plans to do. They go to Tibet, where they barely survive some of Totenkopf's minions and Polly loses her roll of film. That leaves her with only two shots left on her camera.

For reasons known only to the filmmakers, this is meant as a running gag.

They manage to get to Totenkopf's lair with help from "Franky" Cook (Angeline Jolie), a British air-naval officer who seems a rival for Joe's affections. We then find Dex, some of the missing scientists, and Totenkopf's evil scheme: to send a rocket as an ark where he intends to 'begin' again.

That rocket, however, will also destroy the world. Oh, and Totenkopf himself (Sir Laurence Olivier) has been dead for over twenty years.  Joe, with help from Polly, must stop this mad plan and fight against "The Mysterious Woman" (Bai Ling), a menacing figure who has been thwarting their plans.

One almost feels awful bashing writer/director Kerry Conran. This was not just his feature film debut, but a true passion project, beginning as a short film and with a mix of hard work and a little luck, expanded into this homage to movie serials and pulp comic books.

Conran perhaps should be given credit for indeed seeing 'the world of tomorrow', one where computer-generated imagery and reliance on technology to create fantastical worlds would eventually become standard.

The love and affection Conran has for early action/adventure stories and thrilling serials in the Flash Gordon/Buck Rogers style is evident throughout Sky Captain, from the names of the characters (Sky Captain, Polly Perkins, Dex) to their manner of being (daring-do action hero, intrepid reporter/femme fatale, plucky sidekick).

However, Sky Captain and the World of Tomorrow may be a textbook case of loving something so much you end up killing the thing you love. Conran, in retrospect, might have been the worst person to have made the film. It is not a lack of talent or ambition that set him on a course for catastrophe. It is too much passion and affection to where he could not divorce himself from actual filmmaking.

Conran had never directed a movie before, and it shows primarily in how the performances were. When the best performance comes from a man who has been dead for 13 years, you know you have major issues.

No one in Sky Captain had any actual personality. Everyone bar none appeared blank and emotionalless. It really is a race to see whom can act the worst, and one is spoiled for choice. Law showed no range as what is meant to be a swashbuckling hero. In Sky Captain, he came across as almost bored. Yes, he was acting to nothing apart from his fellow costars, but whether flirting with Polly or seeing strange new worlds, Law had the same dull expression and tone.

If this is not his worst performance it's awfully close to one.

Paltrow, whose stock has been going down since her Oscar win for Shakespeare in Love, appeared never to decide if Polly was a comic character or some kind of femme fatale. I kept referring to her as a comic femme fatale, as she sometimes appeared to be going for some 'alluring' woman and sometimes more comic overtones. No matter what, however, she only ended up matching Law in the blank manner.

For years afterwards, Fidel and I laughed at Ribisi's 'PLUCKY SIDEKICK', down to his allegedly endearing use of 'Cap' for 'Captain'. He might have been that homage to the 'plucky sidekick', but he was neither. He was as emotionalless as the others, with the only distinct characteristic of chewing gum. It is laughable to think Dex as this wunderkind when he comes across as almost an idiot.

Despite getting top billing (albeit third), Jolie was on screen for a total of nine minutes. I think Ribisi was on screen longer. This was when Jolie was still trotting out her 'British' accent, but I found Franky more hilarious than interesting. To her credit she seemed like the only one trying to make her character vaguely realistic, but when she commands, "ALERT THE AMPHIBIOUS SQUADRON!" I burst out laughing.

One of Sky Captain's great issues is how despite again its best efforts the audience really was not involved in this world. Again, I appreciate what Conran was going for: a throwback to the zippy, thrill-a-minute serials with lots of action, some 'witty banter' and a mad scientist scheme.

However, one feels like one is watching a story that is for 'insiders' only. It's as if the Conrans (Kerry's twin brother Kevin designed the production and costumes*) had a mythology they know but didn't bother telling us about. The story so floated in their heads for so long that they could thrill to it, but they never paused long enough to let us immerse ourselves into that world.

Add to that some wild leaps of logic. We're supposed to believe the robot attack, Polly's easy access to Sky Captain's island, and a return trip to New York could all happen within twenty-four hours.

As I've pointed out, it was eleven minutes between the opening and the robot invasion. That gives us precious little time to inhabit this world, to get to know or care about these characters. Perhaps in retrospect, less daring-do and more discovery of this universe would have done Sky Captain a world of good.

What also would have done Sky Captain a world of good would be to tone down Edward Shearmur's score. Yes, it kept to the spirit of the feel the film was going for, but it also went on endlessly and announced itself at every opportunity. Again, too much of not-such-a good thing.

Sky Captain and the World of Tomorrow is meant as a love letter to the movie serials that also inspired people like Steven Spielberg and George Lucas. However, despite the technological innovations and pioneering Sky Captain created, the film shows that there genuinely is no substitute for a good script and a strong director to guide the actors.

Computer wizardry can get you only so far.

*The only costumes not designed by Kerry Conran were for Law and Paltrow, whose costumes were designed by Stella McCartney.