The Broken Mirror: A Review This review is part of the Summer Under the Stars Blogathon sponsored by Journeys in Classic Film and Musings of a Classic Film Addict. Today's star is Kirk Douglas.

Kirk Douglas was once deeply ashamed of his Jewish heritage, sometimes claiming he was 'half-Jewish' in the naïve thinking that being 'half-Jewish' was not as bad as being fully Jewish. As he aged and after surviving a helicopter crash, he began to explore and ultimately embrace his Judaic heritage. His own private journey from shame to pride seeps its way to The Broken Mirror, a children's/young adult novella Douglas wrote at age 81, shortly before Douglas himself had a second bar mitzvah.

The Broken Mirror, although very brief and vaguely autobiographical, has the potential to make for a good play and primer to learn about one of history's greatest evils.

Munich, 1938. Little Moishe Neumann is fascinated by these strange marching men with flags of a crooked cross. His father Jacob and mother Leah (Tateh and Mameh to Moishe and his sister Rachel) are worried, particularly after Kristallnacht. They essentially hide out in the countryside, where they keep to themselves on a farm.

Moishe is devoted to his older sister Rachel and loves hearing fairy tales, particularly one about how Satan had a mirror that made everything beautiful look evil & ugly and vice-versa. Satan and his minions attempted to fly it up to Heaven to have God look upon it, but as they went higher it got heavier to where they couldn't hold it. Falling to Earth, the shards fell upon people's hearts and eyes, unleashing evil in the world.

Evil does come when the family is rounded up to an Italian concentration camp. Moishe is the only survivor, and now he no longer wishes to be Jewish. He adopts a new name, Danny, from the Roma (here called Gypsies) and is taken to an American Catholic orphanage. "Danny" is lost in this world until he makes an unlikely friend: Roy, a skinny kid cajoled into bullying him until Danny stood up to himself. Roy then looks on Danny as a hero for helping him and they become inseparable.

It isn't until Roy is adopted, leaving him alone again, that Danny finally breaks down and runs away. He ends up accidentally running to a synagogue and welcomed by the American rabbi that Moishe has metaphorically come home, the lights of the Sabbath leading him back. 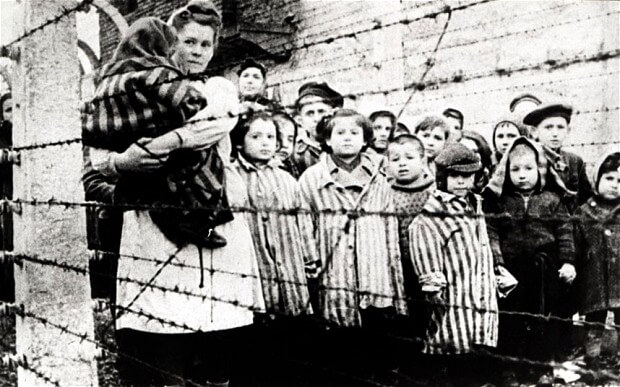 The Broken Mirror touches on one of the most monstrous aspects of an already monstrous episode in human history: how the Holocaust impacted the most vulnerable among us. A children's book cannot be graphic and it is to The Broken Mirror's credit that Douglas gives us just enough information in a simple manner that a child can feel great sadness for Moishe without having to learn some of the more horrific elements.

The voice is extremely well-done: Moishe comes across as very innocent but after he survives his imprisonment not bitter but shell-shocked, confused and alone. His decision to abandon his Judaism both spiritually and ethnically are understandable, making his return more impactful.

The overt symbolism of the evil mirror's shards making people cold and uncaring with Moishe's own experiences works well in this children's story. Douglas uses symbolism effectively both with the fairy story of 'the broken mirror' to that of the Sabbath lights leading Moishe back to a loving home reminiscent of what he lost in Germany. Moishe's goodness comes through, along with his confusion about America and slow embrace of baseball and stronger embrace of Roy.

As I read The Broken Mirror, I found that it might work well as a play geared towards children. Save for Rachel and her boyfriend David's death we do not see anything that could be traumatic for children. I think children could identify with Moishe, who sees a world of wonder until it grows dark, then how he survives to find the light again. A play adaptation might need to work out some things such as expanding the story of his time at the orphanage, but on the whole the source material is there to create a stage version that would work well for children without delving into much more somber elements.

The Broken Mirror makes for fast reading, coming in at less than 90 pages. Douglas obviously was not a Holocaust survivor but the book does in a sense show his own evolution from rejecting his Jewish heritage to being passionate about it. Douglas, like Moishe, went through his own journey to find the Sabbath lights lead him home.

The Broken Mirror is brief, well-written with a story that ends with hope, all positives in a world forever close to plunging itself into darkness.