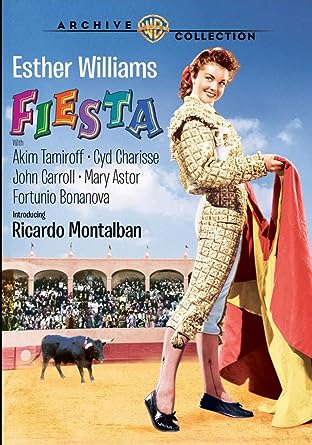 This review is part of the Summer Under the Stars Blogathon sponsored by Journeys in Classic Film and Musings of a Classic Film Addict. Today's star is Mary Astor.

The mind boggles at the thought of Esther Williams as a toreadora, let alone a Hispanic female toreador. To a point I get that Fiesta is meant as a colorful romp through Old Mexico so I can get past a lot. However, even without the wild miscasting I would still find Fiesta a bit 'problematic' if not weak.

Retired matador Antonio Morales (Fortunio Bonanova) is displeased when his wife (Mary Astor) gives birth to a daughter, but his displeasure is mitigated by immediately producing a male twin. The children named Maria (Esther Williams) and Mario (Ricardo Montalban) grow up with various expectations. For Mario, it is to take to the bullfighting ring despite his passion for music. For Maria, it's to find a husband despite her passion and skill for bullfighting. Don Antonio focuses his training on Mario but coolly tolerates his right-hand man Chato (Akim Tamiroff) training Maria.

As a surprise birthday gift, Maria has sent Mario's composition, Fantasia Mexicana, to Mexico City Symphony conductor and instructor Maximino Contreras (Hugo Haas) for evaluation. Don Antonio has no knowledge of this and is too wrapped up in his son's bullfighting debut, pausing only to show contempt for Maria's boyfriend Pepe (John Carroll), a medical student whose career Don Antonio finds idiotic.

Complications ensue when at his debut, Mario finds his father withheld Contreras' pleas to study with him. Mario flees the bullring in disgust which is mistaken for cowardice. Maria decides to help find Mario in her own way: by impersonating Mario in the bullring. More complications and hilarity ensue until everyone gets what they seek and Don Antonio comes around. 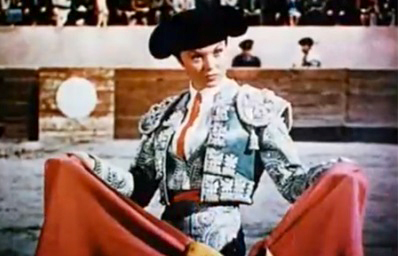 Again, I do understand that Fiesta is not meant to be taken seriously, but the film forces one to think on how idiotic the premise alone is. The idea that anyone would be fooled by Maria doing a little gender-bending as 'Mario' is utter nonsense. Didn't anyone notice how 'Mario' has on some lipstick? There's a whole lot of impossibles going on around here and Fiesta could have done better if it had opted to not make Mario's disappearance so exaggerated.

Again, I also have to consider that only in the alternate universe of MGM would Esther Williams, Mary Astor, John Carroll, Cyd Charisse and Akim Tamiroff possibly pass as Mexican. Bonanova was a Spaniard so at least he was close, with only Montalban as the actual Mexican. In 1947 the notion of having Mexicans or at least Hispanics play Hispanics parts was a stretch (though to be fair it is still a stretch in 2019). However, one might wonder why almost none of them have accents and/or seem to struggle with the few Spanish words they do speak.

For an Esther Williams vehicle Fiesta is more interested in Montalban. It makes sense given that this was American film debut, and the film made much use of his dancing skills. It didn't make much use of his acting for it was a weak performance. His reaction to hearing Fantasia Mexicana on the radio is particularly weak.

Williams did not do any better, and had only the most basic and obligatory swimming scene. I think she gave it a good effort but I found her terribly unconvincing throughout. Bonanova played his one-dimensional role one dimensionally, as did Astor. She probably suffered the worst script-wise as she was called upon to be nothing more than the passive and generally quiet mother to Bonanova's blustery, macho, sexist husband.

To be fair Fiesta does show why Astor was considered the ideal screen mother, displaying a patience, compassion and understanding of her children that their father did not have. However, I am still troubled that we essentially have these awful stereotypes about Mexicans: the men with their chauvinism, their stubbornness, their intense pushing of their children, the women who are passive.

Tamiroff, who despite being Armenian was Hollywood's default Mexican, was probably the best as Chato, who grew to be genuinely fond of Maria while remaining loyal to Don Antonio. His efforts to hide the cross-dressing from everyone is a highlight of Fiesta.

The film's plot is probably weak because the film is more interested in the bright colors and beautiful music of Mexico than in anything else. The film adapted Aaron Copland's El Salon Mexico for Fantasia Mexicana, and it's a credit to both the film and Copland's genius that the music captures the sounds of Mexico so well. It is bathed in bright colors and wonderful music, and to be fair the dance between Montalban and Charisse was a highlight.

As a side note, it wasn't until this dance number that I realized it was Cyd Charisse, her distinct dancing immediately noticeable.

Fiesta is not particularly good or logical, but its bright colors and music make you forgive a lot.

Email ThisBlogThis!Share to TwitterShare to FacebookShare to Pinterest
Labels: Blogathon, Review, Summer Under the Stars