John and Mary: A Review 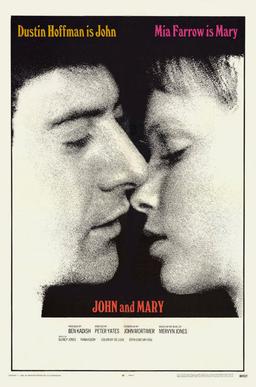 This review is part of the Summer Under the Stars Blogathon sponsored by Journeys in Classic Film and Musings of a Classic Film Addict. Today's star is Dustin Hoffman.

Once the one-night stand is done, you have the morning after. Who is this person sleeping next to me? What are the new rules on post-coitus interaction between strangers? John and Mary attempted to ride the wave of modern love with its tale of our accidental lovers and how they brought their separate pasts into bed with them. It isn't without possibilities, and would make for both a good play and time capsule of its time.

It is also a bit slow and slightly pretentious but not in a terrible way.

It is morning, and a woman is waking up to a man whom she had sex with but whom she also does not know. John and Mary casually slips between past and present as our Man and Woman talk, have breakfast and lunch while contemplating whether to stay for dinner.

Over the course of the film we learn that The Woman is a married man's mistress. She has gone on vacations with her lover James (Michael Tolan) but discreetly slips away from the plane both were on. The Woman waits and gives him what free time he can spare for their trysts. She also lives in an apartment building with a cinema verite director, three Japanese men and in her own flat two other girlfriends with their own relationship issues.

The Man meanwhile shows that he is a fan of music (classical in the morning, jazz in the afternoon he tells The Woman). A furniture designer, he has just ended a relationship with fashion model Ruth (Sunny Griffin) who just moved out of his apartment in what appears an amicable split. She called to invite him to a party, but he seems to want to spend time with The Woman instead.

Then again, neither The Man or The Woman seem to decide what they want. The Woman leaves, but not before leaving her number on his mirror. The Man wipes it clean but then rushes to the neighborhood she said she lived in to find her. After fruitlessly searching for her, The Man returns to find The Woman cooking dinner.

They go back to bed where they finally learn each other's names: John (Dustin Hoffman) and Mary (Mia Farrow).

As I watched John and Mary, my main thought was that this, with some tweaking, would make for a good play. Essentially what we have is a two-person show, with the flashbacks casually flowing through. We even get a lot of internal dialogue where we hear what they are thinking. On the stage one could make those into asides to the audience without interrupting the flow.

John Mortimer, who later would create Rumpole of the Bailey, adapted Mervyn Jones' novel. It does seem rather curious to give the veddy English Mortimer the task of adapting a story of swinging 1960's youth. It's almost as if Mortimer were examining an alien world of square hippies who talk about Jean-Luc Godard's Week End in the same way they talk about eggs.

As a side note, the counterculture protesters at James' political event looked and sounded so square you expected them to start shouting "Nixon's The One!"

I think one of Mortimer and director Peter Yates' mistakes was in sticking too close to the novel, or at least to what I imagine was John and Mary's structure never having read the book. In a book, we can flow easily from past to present, hear internal thoughts and have them end by asking each other's names before having sex again. In a film, it strains the imagination to see them go on this nearly-endless date and have it go exactly as it did.

Also, we sometimes wonder what Mortimer and Yates (both of whom were Englishmen) really thought of these young Americans. "To Hell with equality of the sexes! I'm going to cook for you!" Ruth tells John. As could be expected, our fashionista makes a right mess of it despite John being a master chef.

Hoffman and Farrow seem an unlikely choice for our lovers. Hoffman was 32 when he made John and Mary, making it look a bit odd to paint him as the symbol of vibrant youth. Granted, he was only two years removed from The Graduate but now it looks a bit peculiar. Farrow is pretty and she does well as Mary but she does not convince me that she is either a liberated woman or a put-upon mistress.

Their backstories don't seem all that interesting, though to be fair John's memories of his activist mother might now elicit chuckles. We see that John's mother was too busy to make lunches for him, spending more time on the intense and hard-fought campaign to make Alaska a state.

It's not a joke: his flashbacks include her leading protests with a banner that reads "Make Alaska A State". Now that we're a half-century past that controversial turning point the idea this would cause street demonstrations seems almost quaint. It does however, allow us to see Olympia Dukakis in an early role as John's mother. Also keep an eye out for Tyne Daly as Hillary, one of Mary's roommates.

John and Mary is a nice time capsule capturing the changing mores and values of late 1960's America, where one-night stands and the uncomfortable morning after are openly discussed. It, I think, would still make for a better play than film but on the whole it is not a bad film.