The Devil and Miss Jones: A Review

THE DEVIL AND MISS JONES

This review is for the Summer Under the Stars Blogathon. Today's star is Jean Arthur.

The struggle between management and labor is a story as old as time itself.  The Devil and Miss Jones couches its pro-union message within a sweet pair of love stories that ends up charming the audience.

Reclusive billionaire John P. Merrick (Charles Coburn) is incensed that he is hung in effigy by Neely's Department Store employees. Neely's is a small part of his business empire, but he sees that union agitators will cause him nothing but trouble.

To ferret out the backstabbing employees, he will go incognito as "Thomas Higgins", taking the name of a private investigator already hired to spy for union activities. Thomas quickly sees that Neely's management is arrogant, condescending, insincere and petty. Salesgirl Mary Jones (Jean Arthur) takes Thomas under her wing.

Thomas is not pleased that Mary's love is Joe O'Brien (Robert Cummings), former Neely's employee and union agitator. However, he also sees that Mary is a good person pushed by Neely's management to be pro-union. Thomas also sees their coworker Elizabeth (Spring Byington) is also not just sweet but sweet on him. To his surprise, he soon starts getting sweet on Elizabeth too, finding joy in the simple things like a day out at Coney Island where cheap pop is better than expensive champagne.

A series of mishaps and mistaken identities results in secrets being revealed, but ultimately all's well that ends well, with two couples having a double wedding while celebrating, along with the entire Neely's staff, aboard a ship for a Hawaiian holiday. 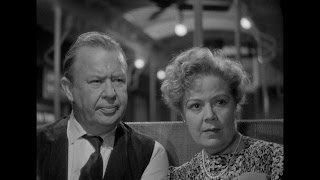 Long before there was an Undercover Boss, there was The Devil and Miss Jones. The film is tongue firmly in cheek, starting with the opening title card asking "the richest men in the world" not to sue the filmmakers. A lot of the comedy comes from Charles Coburn, who I would argue is the star even though he was nominated for Best Supporting Actor for The Devil and Miss Jones.

He has a delightfully flustered manner every time he has to endure some indignity, whether it is the haughty section manager Mr. Hooper (Edmund Gwenn) or nearly being arrested for trying to hock his watch for change to make a telephone call. The Oscar-nominated screenplay by Norman Krasna builds on the logic of the situation, where Higgins is telling the truth but then has to pass off lies to cover up his acts.

The scene at the police station allows each of the principals a chance to show themselves off in the best way. There's Coburn's mix of irritation and befuddlement, there's Cummings' straightforward and cocky Joe, Arthur's sincere Mary and Byington's touchingly in love Elizabeth.

For me, the clear standout is Coburn, whether he is flummoxed by the workers or charmed by Elizabeth. The dual performances of Coburn and Byington is sweet and delightful, making their growing romance a delight. 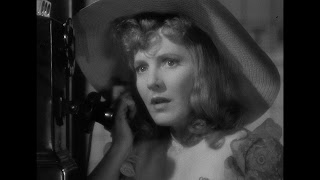 Arthur is no slouch when it comes to showing a fiery commitment to the union cause while still worrying over Joe. She is great in comic scenes, such as when circumstances push her into hitting the unsuspecting Higgins on the head and she is clearly struggling to do that, even if she thinks he is a spy. However, she also is able to handle dramatic moments, such as a lovely pair of monologues about helping the "poor" Mr. Higgins or talking about love.

Apart from using the term "Chinaman in pigtails", it is a beautiful speech speaking about how Joe might not be the best man for her, but he is the right man for her. Arthur specialized in ordinary women who put down the haughty elite. Here, she is a blend of two of her better-known films: the cynical woman transformed in Mr. Smith Goes to Washington and the working-class girl who showed up the wealthy in You Can't Take It with You.

Byington tones down the eccentric persona to make Elizabeth sweet and sensible, slowing finding love with Thomas. Cummings was surprisingly charming, even attractive, as Joe. He was a passionate union organizer, but he was also a bit wacky (his disguise to enter Neely's being overtly silly).

There is a Capra-esque quality to The Devil and Miss Jones, balancing comedy and romance with social commentary. The film is not anti-capitalist or anti-business. Far from it: Merrick/Higgins condemns the store's management in a firm tirade after he and Mary are hauled off for working with Joe. "Can't you understand that dealing with people the way you do is the reason for this civil war? I've worked with these people! They have rights!"

Merrick/Higgins understands what the management does not: that if the executives treated their employees with respect, there would be no need for these "troublesome" unions. It's the management's mismanagement that causes the problems, not the unions or the owners.

That message about workers' rights is mixed in with comic chase scenes and romances. A happy ending is the perfect ending for this cute love story, or stories really. Joe and Mary, Thomas and Elizabeth, owner and employee: all find love and respect. The Devil and Miss Jones shows that there can be peace with respect, and some hijinks.