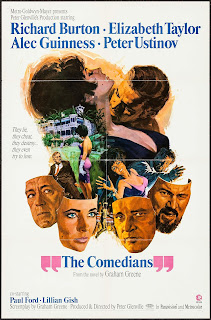 This review is for the Summer Under the Stars Blogathon. Today's star is Elizabeth Taylor.

Haiti is a long-suffering nation. Poverty, crime, a long history of unstable governments and stable dictatorships. The most infamous Haitian dictatorship was that of Francois Duvalier, better known as "Papa Doc". The Comedians, a film set during the early period of Duvalier's reign, is not exactly using the Voodoo-tinted country as backdrop to a story of extramarital liaisons. It however is a slog to sit through, with unintentionally funny moments popping out amidst the Creole chaos.

Hotel owner Brown (Richard Burton) wants to dump the Port-au-Prince resort his late mother dumped on him. He, however, finds no buyers and few guests shortly after Papa Doc comes to power. The only guests are Mr. and Mrs. Smith (Paul Ford and Lilian Gish), who once ran for President under the Vegetarian Party ticket. They've come to set up a vegetarian farm, hoping to create a vegan paradise in Haiti.

Also coming is Major H.O. Jones (Alec Guinness), who has lucrative Haitian contacts for military gear. Unfortunately, changes in leadership put him in prison. Major Jones is sprung thanks to the little cache and cash Smith and Brown have. Jones isn't out of danger, but Brown has greater issues on his mind.

There's the dead government official in the empty hotel pool. Add to that the machinations of a planned rebellion against Duvalier by Brown's friend Dr. Magiot (James Earl Jones) and the minister's poet son Henri Philipot (Georg Stanford Brown), who has embraced the Voodoo. By this time Jones is out of prison and currying favor with Captain Concasseur (Raymond St. Jacques), a major figure with Duvalier's henchmen, the Tonton Macoute.

The biggest issue on his mind is Martha Pineda (Elizabeth Taylor), the German-born wife of a South American ambassador, Manuel (Peter Ustinov). She is his mistress, but both struggle with their affair. With Haiti closing in on a more vicious dictatorship, not all of them will live to leave the haunted island. 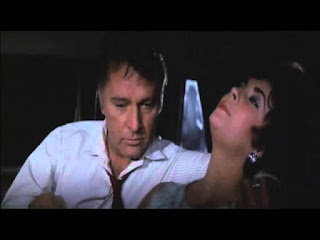 The Comedians, made a decade after Duvalier came to power, is the only film I know of that tackles the Papa Doc Duvalier era. It should not be a surprise that the actual Haitians play a secondary role. Perhaps given that The Comedians is part of the Burton-Taylor catalog, the focus on the troubled love affair between Brown and Martha would take precedence over the human rights violations of the Duvalier pere era.

The Comedians suffers from a certain misplaced level of seriousness that ends up making things hilarious. Already the thought of the pacifist Vegetarian Party candidate having enough sway to visit Jones is odd. However, the sight of Lilian Gish facing down and talking back to the Tonton Macoute while dressed like she had wandered off the set of The Napping House film adaptation makes things uproarious.

This, however, does not compare to what is the ghastliest moment in The Comedians. While the film takes pains to explain the situation, the sight of Alec Guinness in both blackface and in drag, attempting to pass himself off as a large black woman is more horrifying than anything else. Even by 1967 standards, Obi-Wan Kenobi trying to pass himself off as Mammy is beyond tawdry or insulting.

A major problem in The Comedians is the casting. The sight and sound of the very British Peter Ustinov as a South American diplomat is, granted, not as horrifying as Guinness in his blackface drag act. However, his British tones were clearly audible, making the idea that his first language is Spanish laughable. 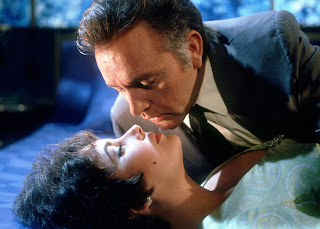 He, at least, was one of the better performances in The Comedians. Gish, judging from her performance, was supposed to be daft and daffy, waxing rhapsodic about the benefits of vegetables. If so, then I cut her some slack. Guinness too did better as the extremely chipper Jones, whom one suspects is not what he claims to be. The quip about Lawrence of Arabia was amusing though.

It is in our great lovers that The Comedians flounders. Taylor's accent shifted all over the place. One moment she sounded British, another American, and then we learn her character is German, but that Teutonic accent shifted too. The accent only underlies the overwrought manner to her acting, sometimes bored, sometimes overblown. What is meant as a great romance looks like two people bored with each other.

Burton does himself no favors when playing at romance, though I thought he was better when against anyone other than La Liz. However, he too seemed to be slumming his way through The Comedians, sometimes looking half-asleep. Perhaps he was hit with a zombie curse by Papa Doc?

I think director Peter Glenville was more interested in showing off the odd transitions from one scene to the next (for example, shifting from lifting a corpse to having a body jump into a pool, or from a scene of a character about to scream out to seeing another joyfully say "Welcome to Haiti"). If he did care about the performances, they were from the small group of future notables playing Haitians. 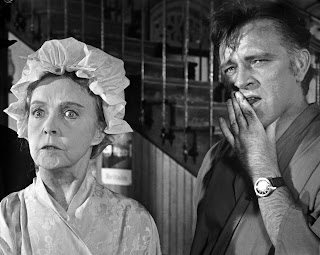 James Earl Jones did much better as the doomed Dr. Magriot where his end is shocking, even if he too seemed more quiet than necessary. Georg Sanford Brown's rebel leader is also strong, particularly when he abandons his Western ways to embrace the Voodoo. Roscoe Lee Brown as suave journalist Petit Pierre also stole the scene from anyone he was with.

The highlight was St. Jacques as the villainous Captain Concasseur, cool but delighting in his murderous ways.

I think it was a mistake to have Graham Greene adapt his own novel. It is a case of the author loving his work too much, giving the characters rather grand things to say that end up sounding silly. That is hard enough to hear, but the notion that Richard Burton would truly believe Alec Guinness was schtupping Elizabeth Taylor is laughable, made more so by Burton's performance.

I think The Comedians is worth watching for the secondary actors, like Jones, Brown and Browne and Cicely Tyson in an early role of a prostitute. Apart from them and Laurence Rosenthal's score, there is nothing particularly good in the film. The Comedians does in the end up funny, though for all the wrong reasons.