Something of Value: A Review 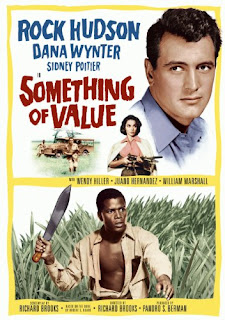 This is part of the Summer Under the Stars Blogathon. Today's star is Sidney Poitier.

Long before Sidney Poitier became the embodiment of the elegant, strong, dignified black man, he on occasion had to endure certain indignities. Something of Value has a surprisingly sympathetic portrait of a then-recent rebellion. It also has one good performance, one lousy performance, and feels longer than it is.

In 1945, the British East Africa colony of Kenya has the white McKenzie family living in harmony with their Kikuyu tenants and servants. Peter McKenzie (Rock Hudson) and Kimani (Sidney Poitier) have been lifelong friends despite their racial differences. This does not protect Kimani from getting slapped by Peter's brother-in-law Jeff (Robert Beatty) for wanting to handle a rifle. Kimani also struggles when his father is imprisoned, having ordered the killing of a child born feet first, a cursed child according to Kikuyu tradition.

Seven years later, Peter's beloved Holly (Dana Wynter) returns from her British education and becomes engaged. Kimani, for his part, struggles between living in the British world and the lure of the rising Mau Mau movement. Local elder Ngoju (Juano Hernandez) has initiated Kimani into the Mau Mau movement, but he still struggles against killing, especially women and children. One of those injured is Peter's sister Elizabeth (Wendy Hiller), who is pregnant. The Mau Mau is everywhere, even among the Kenyan troops ostensibly working with and for the British. The conflict between the old friends comes to a violent conclusion, but perhaps there is hope for the next generation. 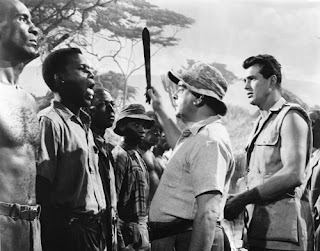 The Mau Mau uprising had effectively ended a year prior to Something of Value, so it would be highly topical when it was released. With the passage of time, Something of Value's impact has lessened. As a film itself, I find that it has a few flaws that push it down.

Of particular note is the stage-bound setting of the film. While there was some location shooting, it is clear that much of Something of Value was shot on a soundstage. As such, there is a certain fakeness in the film, particularly in what is meant to be the African outdoors.

Another particular flaw is Rock Hudson. I think he at the very least looked a decade too old for the part, but he also was totally blank as Peter. His delivery was flat, with no emotion behind his dead expression. It is shocking how Hudson essentially reverted to his early performances here. I genuinely thought Something of Value was early in his career, thus excusing him from showing no acting skills beyond being able to speak.

I was therefore shocked to discover Something of Value came out after his Oscar-nominated turn in Giant. This is a terrible performance, made more bizarre by his total lack of a British accent despite supposedly being British.

The poor Hudson performance is countered by the excellent work from Sidney Poitier. I do not think that Poitier played many native Africans in his career, but here he could play a Kenyan with believability. It goes beyond his accent, however. Poitier plays Kimani's conflict well, particularly when he reencounters the McKenzie family when raiding the farm with the Mau Mau. As he sees a clearly injured Elizabeth, he cannot bring himself to kill her. Instead, he smashes the reflection of her desperate pleas, the agony clear. 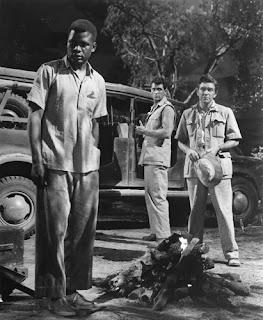 It is again, a surprisingly sympathetic portrayal of the Mau Mau, less crazed killers and more violent revolutionaries. Juano Hernandez's turn as Ngoju is masterful. Frightening and frightened as the Oath Giver and leader in the Mau Mau movement, Hernandez brought an anger and tragedy to his performance. As he speaks against the British colonizers, he is passionate and intense. When he is forced to swear before his god in the thunderstorm, he becomes human, frail and terrified of sending others to Hell.

While Walter Fitzgerald as Peter's father William is strong, the rare white who knows the native population is being poorly treated, the other performances are not particularly strong. Hiller and especially Wynter come across as weak, sometimes overdramatic.

Something of Value has an excellent Miklos Rozsa score, blending African and western melodies in a beautiful manner.

Perhaps Something of Value has as one of its weakest points the ending, which suggests a hopeful coexistence between the British and Kenyans. The white population would probably think they too were Kenyans, but there is still something off about that idea. Still, it is interesting to see Sidney Poitier in a rare role where he is subservient. Something of Value may not be well-remembered, but it has just enough for a mild recommendation.