Not Okay: A Review 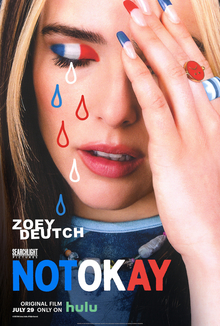 NOT OKAY
I am not a fan of "trigger warnings" in film apart from perhaps warning audiences of flashing lights to prevent epileptic attacks. Out of all the warnings I have read though, a warning about a film having "an unlikeable female protagonist" seems the strangest one yet. Not Okay is meant as a comedy on the perils of online living. However, a tonal imbalance and a surprisingly smug manner dooms it to being among the worst films of 2022.
Danni Saunders (Zoey Deutch) finds her job as an online magazine photo editor won't help her become the influencer and social media star she wants to be. It also won't get her the attention of Colin (Dylan O'Brien), a major social media influencer who appears to be known only for the perpetual puff of marijuana smoke that surrounds him.
To up her profile, she opts to fake a trip to Paris on a fake writers' retreat. As she doctors pictures of herself among the various sites in Gay Paree and posts false Twitter updates, the world gets in the way. A major terrorist attack in Paris would place Danni at the scene, if she actually were there.
Rather than admit to faking the photos and trip, she fakes being a survivor. From that comes the instant fame Danni has so longed for. Her Depravity Magazine coworkers invite her to gay bowling (formerly excluding her for not being LGBT). She gets an office, irritating her frenemy Harper (Nadia Alexander). Colin has sex with her. Best of all, she gets a friend in Rowan Aldren (Mia Isaac), a high school shooting survivor and activist/spoken-word poetess.
Danni basks in the reflective glory of Rowan's fiery passion. Not only do they become friends but join forces against the evils of guns. That is until of course Harper finds the truth and threatens Danni with exposure. Danni is forced to admit the entire "Paris bombing survivor" bit was a fake, and instantly becomes the most hated woman in America. As Kelvin (Karan Soni), the guy who has openly been asking her out explains, "White women". Ultimately, Danni does not get a redemption arc, forever living the shame of appropriating pain (especially black female pain) for her own gain. 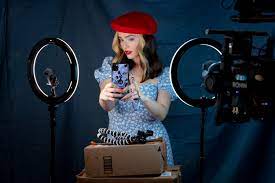 Not Okay has one thing in its favor: it lives up to its title. Divided into nine parts (No One Understands Me, The Lie, Oh F--k, What I Saw That Day, Rowan, I Am Not Okay, I'm a Good Person Now, I Don't Get a Redemption Arc and Finale), the film goes out of its way to make not just Danni but just about everyone so unpleasant and unlikeable you do not care for or about anyone. Even Rowan, which Not Okay wants you to see as the heroine, is at times hard to like with her woke poetry and lecturing.
If only writer/director Quin Shephard had made a few alterations, Not Okay could have been that satire on internet fame that she was aiming at. Harper could have been motivated by suspicion about the "too good to be true" story of Danni's survival, or at least maybe found an inconsistency that made her question it. Instead, Harper was motivated by jealousy and anger, which makes her as unpleasant as Danni. Danni could have been just desperate for affection versus attention.
Some sections are more than cringe-inducing. In Part VI: I Am Not Okay (the film puts the titles in Roman numerals), we have a montage of people commenting and using the hashtag #IAmNotOkay. Intentional or not, it brought to mind the You Will Be Found montage from Dear Evan Hansen. I don't use that as a compliment. Curious both viral posts (his video, her article) are built on a lie that supposedly inspires people to be better. I suppose Evan Hansen could be played by any nationality, so "white privilege" would not be a factor as it is in Not Okay. Still, there is a strange similarity in both.
It does not help when Not Okay begins with a montage of people piling on Danni, so we already know where the story is headed and instantly dislike her. Worse, Not Okay does not want even the concept of Danni getting a redemption to be possible. While everyone else can be horrible, somehow Danni is irredeemable rather than merely dumb, narcissistic and vapid. 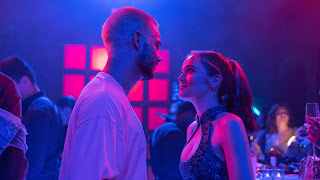 Not Okay thinks it is a comedy, but in reality, the elements that would make it one either are not there or make it obvious that it isn't. I disliked the Pierre-Philippe Cote score, which was Wes Anderson lite, full of vocals that signal "this is funny" when it is not. Cringe is not comedy. Early on, the performances indicate that people think this is funny, such as Kelvin's sad efforts at ingratiating himself to Danni. When Danni's editor asks Danni if she genuinely had a Fear of Missing Out (FOMO) due to Danni being on vacation on September 11th, it was all too forced in a "oh, aren't we being funny" manner.
Again and again, Not Okay thought it was funny and insightful when it was really painful and insipid. No case is made as to why Colin would be famous. He wasn't that interesting a character, let alone interesting enough to have millions of followers. It is a shame, as Dylan O'Brien is one of our better younger actors, and it is sad to see him wasted here (no pun intended).
Deutch, I will say, at least tried to make Danni into a sympathetic character, but was forever hemmed in by the script. Isaac too, I think, did her best, but when Not Okay turns into Karen Meets Mary Sue, it becomes a bore.
Shephard's script needed to be a little less overt in its disdain of Danni and those who oppose the practically perfect in every way Rowan. The scenario, I think, would not cause the scandal the film thinks it would. Having Rowan say that "the alt-right" would mock her for freezing up after stereotypical rednecks threw firecrackers at her anti-gun rally is a strange thing for a teen still in high school to say.
There may be a film that mocks people's obsessions with instant fame in a good way. Not Okay is not that film. Neither as insightful nor clever as it thinks it is, Not Okay is certainly that.
DECISION: F
Posted by Rick at 8:11 PM