Dear Evan Hansen took a mere six years from ruling the Great White Way to its cinematic adaptation. While it took longer to go from stage to screen than another recent Broadway hit (The Prom), it is still a surprising turnaround and a sign of what newer Broadway productions have offered theatergoers. Unlike The Prom though, Dear Evan Hansen won six of its nine Tony nominations including Best Musical versus The Prom's 0 for 7 record.

If The Prom and Dear Evan Hansen are the best that contemporary Broadway can do, the American musical theater is pretty much dead. Dear Evan Hansen is a hybrid of bad and bland, monotonous and tone-deaf.

Under orders from his therapist, Evan writes letters to himself, but Connor gets a hold of Evan's newest letter which mentions Zoe. Enraged, Connor takes it from Evan, causing Evan more anxiety. Two days later, Connor's mother Cynthia (Amy Adams) and stepfather Larry (Danny Pino) meet with Evan. They have mistaken Evan's letter for Connor's suicide note addressed to "Dear Evan Hansen". That in a pique of haste Connor had been the only person to sign Evan's arm cast adds to the "evidence" of the Evan/Connor friendship. 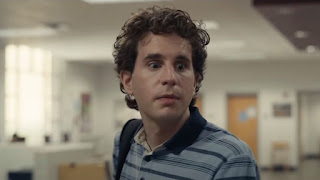 While he makes somewhat of an effort to correct Connor's family's mistake, Evan is soon sucked into this beautiful lie that he and Connor were friends. This has the surprising effect of giving Evan the faux family he's always yearned for, a romantic relationship with Zoe and even a bit of popularity at school, especially after he gives a speech where he tells his fellow students You Will Be Found.

A viral hit, school activist Alana (Amandla Steinfeld) forms the Connor Project to help fellow students with suicidal thoughts. As part of the Connor Project, the orchard field that Evan and Connor so "loved" is to be renamed and restored in Connor's honor. However, little discrepancies start building up. Evan's working class mother Heidi (Julianne Moore) starts growing more irritated that Evan is pushing her away, and ultimately the truth comes out in devastating ways. Will everyone find peace? 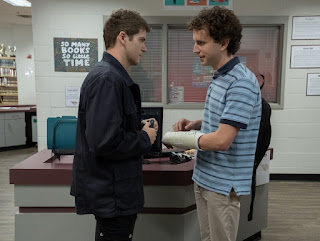 It should be remembered that Dear Evan Hansen comes to us pretty much as it was seen on Broadway, where audiences and critics thrilled to its themes, plots and performances, with the added bonus that the Broadway Evan Hansen was recreating his Tony Award-winning performance on film. To put it in perspective, it would be as if the film version of My Fair Lady had actually cast Julie Andrews as Eliza Doolittle or Angela Lansbury had recreated her title role in Mame. With such a highly praised, perhaps beloved Best Musical winner now committed to film, what exactly went wrong?

I think it might be that perhaps Dear Evan Hansen was not as beloved as the production team thought it was. I grant that I am not a musical theater expert, but Dear Evan Hansen suffered from a terrible slate of musical numbers. To my ears, each song sounded exactly the same. I couldn't tell one from another, to where I could not tell whether a song sung by Evan after the truth is discovered was a new song or the continuation of Words Fail, the song the Murphys and Evan sang.

I put that to the fact that every song is sung the same way: slow and sad. A good musical, I have found, has variety in the song style. Rogers & Hammerstein's The Sound of Music could shift from the upbeat I Have Confidence to the tenderness of Edelweiss. Lerner & Lowe's My Fair Lady could shift from the slightly naughty Get Me to the Church on Time to the more wistful I've Grown Accustomed to Her Face. Kander & Ebb's Cabaret could shift from the decadent Willkommen to the almost mournful Maybe This Time.

Conversely, the Dear Evan Hansen songbook had no distinguishable song, let alone variety in them. The closest that Dear Evan Hansen had to an upbeat song was Sincerely, Me, but that number is simply cringe-inducing to almost horrifying. Seeing the dead Connor cheerfully "recite" the fake letters Evan and Jared write is creepy, not joyful. We the audience know that Connor has killed himself, and that Connor was at very best indifferent to Evan, so seeing this faux-happy song-and-dance is all kinds of wrong to almost grotesque. 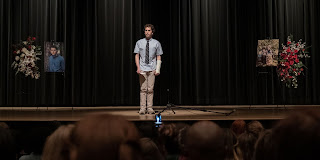 Add to that the gay innuendos Jared insists on throwing in add a level of noxious to the whole thing.

Putting aside the monotonous nature of the Dear Evan Hansen songbook, the performances don't make any of it better. Platt has been roundly criticized for playing a sixteen-year-old at age 28. I was not appalled that a man played someone almost old enough to be his son, though at times one is forced to suppress chuckles at seeing Platt try to pass himself off as a decade-plus younger. It is that director Stephen Chbosky could not break Platt of a theatricality in his performance. 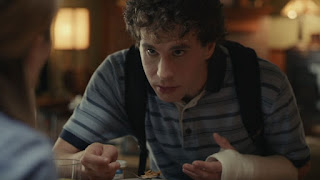 Platt seemed determined to mine every tic and excessive mannerism to Evan, to make his social anxiety so massive it's a genuine surprise he can function. He can't make the awful nature of Evan's actions even slightly redeemable, and he comes across looking like both a jerk and frankly as nuts. Evan is essentially a monster, riding a lie to his own benefit, and nothing in Platt's performance makes one like Evan Hansen.

As such, why was he so acclaimed to where he won a Tony for all this?

Perhaps because he was the predominant singer in the film. I think that maybe outside Yentl no musical film has given one character the dominant role in the songs. I think that Evan sang either solo or with others all but four of the eleven songs in Dear Evan Hansen. That means Platt was either the central or co-lead to seven songs, an astonishing number that put so much focus on this one performer.

The last song, A Little Closer, was sung by Ryan, but it speaks to the blandness of Dear Evan Hansen that is sounds like any generic pop song in so many indie films.

No one else really does him/herself any favors acting-wise either. Dodani's Jared comes across as a nasty, bitchy friend who essentially disappears from Dear Evan Hansen after Sincerely, Me, making his role in the deception almost incidental. Adams forces herself to look pained, but I never sensed that she genuinely loved Connor, let alone mourned him. Oddly, Dear Evan Hansen seemed to almost make the awful case that most everyone was actually happy or at least relieved that Connor killed himself, a wild miscalculation that makes things more gruesome.

Grudging credit can be given to Dever and Stenberg for their performances, though they too seemed a bit hemmed in.

Perhaps the biggest issue one has with Dear Evan Hansen is the subject matter. Issues like social anxiety and suicide should be treated delicately, but here they seem to be mere fodder to allow a surprisingly loathsome person to be seen as almost heroic if not inspirational.

Oddly, while watching Dear Evan Hansen, I thought of all things a light romantic comedy. It looked like if someone took the plot of While You Were Sleeping and decided to make it a searing teen drama with music.