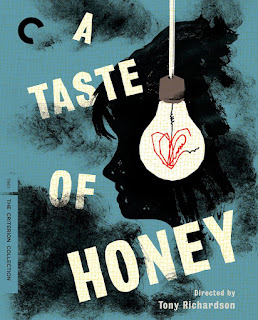 A TASTE OF HONEY

A Taste of Honey has it all: abusive mothers, miscegenation, illegitimate births, homosexuals. An early example of "kitchen sink drama", A Taste of Honey delves into the lives of three disparate people brought together by all these elements.

Working-class schoolgirl Jo (Rita Tushingham) yearns for a better life away from her lush, tart of a mother Helen (Dora Bryan). Bouncing from flat to flat over Helen's inability to keep up with the rent, Jo is counting the days where she will be free from school and start her own life.

Her dreams are complicated by two situations: Helen's romance with the younger Peter (Robert Stephens), who makes it clear he doesn't want Jo with them, and Billy (Paul Danquath), the black sailor with whom Jo experiences her first romance and sexual encounter.

Billy sails off and Helen chooses middle-class respectability with Peter, but neither really bother Jo. She's starting a new life as a shoe salesgirl. Here, she meets Geoffrey (Murray Melvin), whom she starts a platonic friendship due to his homosexuality. Geoffrey and Jo make an odd couple, but things take a turn when Jo finds herself knocked up. As Billy is now gone, Jo opts to have the child and repeatedly declines Geoff's help and marriage offers.

Geoff contacts Helen for help, and she seems willing but Peter again pushes to keep Jo out of their lives. Jo for her part isn't eager for Mommie Dearest to be part of her or her child's life either. As Peter has found a new bit of fluff, Helen now is more able to help Jo, though it means Geoff will have to go, which he does. At the end, Jo tells Helen the child may be black, and we end A Taste of Honey on an ambiguous note, with Helen moving in, Geoff moving out and Jo unsure of what is to become of her. 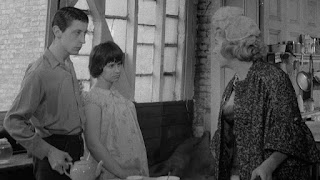 I am at a bit of a loss over why for a brief time British cinema seemed wildly obsessed with chronicling the miserable lives of the British working class. Films like A Taste of Honey and Saturday Night and Sunday Morning appear to suggest if not flat-out say that the British working poor led lives of loud desperation. They faced endless horrors and were perpetually unhappy, making horrible decisions, drowning their miseries in booze and broads. I'm genuinely surprised no one ever opted to make a spoof of these kinds of films, but I digress.

A Taste of Honey tackles serious subjects in a somewhat realistic manner. I say somewhat only in that Shelagh Delaney (adapting her play with the film's director, Tony Richardson) can't quite escape the theatrical setting. Many scenes, particularly when we're at Jo's loft, look like they could easily take place on a stage. The film does not totally avoid looking like a filmed play, which did make the overall effect a bit stagey.

However, these limits are offset by some of the performances. Tushingham, making her film debut, is quite strong if perhaps at times bordering on hysterical as Jo. When she isn't shouting at someone, her quiet moments allow the viewer to see Jo as frustrated by her surroundings, one who yearns for a better life and even has a bit of joy that is quickly taken from her. She can be tacky, like when she almost chipper-like asks Geoff to describe being with a man. She can also, however, be arrogant, hard-headed and lost. Despite what she feels about her mother, Jo is repeating the same mistakes Helen made. It is a strong debut performance. 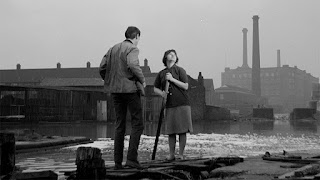 I found Bryan to be the better performance. Her Helen was not just a selfish floozy but someone with a bit of a heart. Bryan made Helen a sad, tragic figure: one who did put herself first but who also, in her way, wanted something better for Jo. When she remembers Jo's father and how she ended up pregnant, you see Helen looking back not in anger but in regret. When she sees the ring Billy gave Jo, she tries to warn her daughter about men, but by now she has set such a poor example her words fall flat. Struggling to love Jo and be a mother, Helen could not truly put her daughter ahead of herself. It is a beautiful performance.

That leaves Melvin, and here is where A Taste of Honey could only go so far. While it isn't overtly stated Geoff is gay he does acknowledge it. However, Geoff's sexuality plays almost no role in the story. We never see him so much as look at another man, and it makes one wonder if Geoff's homosexuality is there more for the novelty of seeing a gay man on film than anything else. Granted, A Taste of Honey is Jo's story, not Geoff's, but seeing that he really has no purpose apart from being an early version of "the gay best friend", it seems almost pointless to bring up the subject.

A Taste of Honey is clearly an ironic title, as no one here will ever know the sweet life. The film, well-acted and directed, gives us a look into this world that more than a few people know personally. I did find it an interesting story, though again I wonder if the British working class ever had any happiness in their lives.