The 5,000 Fingers of Dr. T is a cinematic rarity in that it is the only screenplay written by Theodor S. Geisel, better known by his nom de plume Dr. Seuss. The 5,000 Fingers of Dr. T, I think, would work as a subversive children's book. As a feature film, while there is a strong effort to reevaluate it as some avant-garde feature or undiscovered children's classic, I would use the word "weird".

Most of The 5,000 Fingers of Dr. T is a fever dream of little Bart Collins (Tommy Rettig). Bored and unenthusiastic about his piano lessons, he dreams that he is in a world ruled over by his mad (as in angry) piano teacher, Doctor Terwilliker (Hans Conreid). Dr. Terwilliker's piano teaching style is brutal, but for some reason Bart's mother Heloise (Mary Healy) insists Bart must continue them. Bart finds some sympathy from the plumber Mr. August Zabladowski (Peter Lind Hayes), but he can't do much for Bart.

In Bart's dream, the mad (as in bonkers) Dr. Terwilliker will force 500 boys to play a massive piano. Terwilliker has also imprisoned and hypnotized Bart's mother to be his assistant and potential wife. Zabladowski is still a plumber in this mad world, but he eventually joins forces in an effort to stop Terwilliker's plot for world domination. It is up to them to break both Terwilliker's scheme and Heloise's hypnosis so that Heloise and August can find true love. 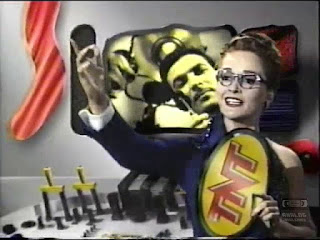 This may be one of the oddest musicals ever made, and certainly among the oddest musicals targeted at children. There are musical numbers that are just insane, and one watches with a mixture of disbelief and fascination that people could have been filming or participating in this and not think "is this a bit too much?".

Take for example the Dungeon Ballet. Bart, to escape the clutches of Terwilliker, manages to go into the bowels of this madhouse, where he observes a group of green-painted men playing instruments both real and fantastical. As one watches, you start imagining that this is what the Morlocks from The Time Machine would be doing before they went full-on cannibal.

The sheer lavishness and attempted grand nature of the Dungeon Ballet comes across not as whimsical or cute but as just plain weird if not downright psychotic. Very weird, like an MGM musical number on acid. I think that's a good way to describe the various musical numbers in The 5,000 Fingers of Dr. T: what an acid trip would look like if it were turned into a musical.

There's a Hypnotic Duel between Dr. Terwilliker and Zabladowski that again comes across as just weird, these two men doing a bizarre dance-off where one tries to outdo the other in mesmerism. By the time you get to Dressing Song Do-Me-Do Duds, a song where Terwilliker is dressed by his minions for his role as Ruler of the Universe, you think everyone involved in the film is bat-guano crazy.

I cannot think of another film where a man sings quite so merrily about what underwear he will be wearing on this most delightful day. That mostly everyone is taking this so seriously only adds an extra layer of the bizarre to the proceedings. That The 5,000 Fingers of Dr. T was produced by Stanley Kramer, King of the Message Pictures (High Noon, Guess Who's Coming to Dinner, A Child is Waiting, On the Beach) adds yet another layer of the bizarre. 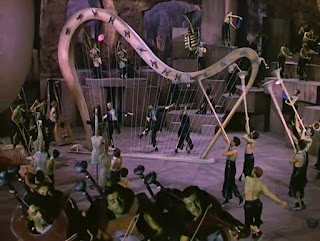 Almost all the songs are again flat-out weird, even for something as bonkers as The 5,000 Fingers of Dr. T. The only real songs I thought were not as looney were Ten Happy Fingers (which I can see being used to teach piano) and Dream Stuff (a lovely, sweet lullaby that should go over well even now). Apart from that though, my sense is that more than one kid will have nightmares if shown The 5,000 Fingers of Dr. T too soon in their lives.

I think I would have found the conjoined twins Judson and Whitney traumatizing. The roller-skating twins were conjoined by their shared beard, and once cut they die. There are so many questions involving the logic of twins conjoined at the beard, but seeing them die after their beard is cut and thus separating them is one of the less oddball ones.

I give wild credit to Hans Conreid, who embraced the camp looniness of Dr. Terwilliker with a deranged glee. Perhaps he knew you couldn't go over the top in something as insane as The 5,000 Fingers of Dr. T, so his unhinged manner, camping it up to the Nth degree looks almost normal. Sneering, flaying and completely insane, Conreid went all-in on the cray-cray.

No one else, apparently, was in on the joke (if there was one). Healy suffered the most, for she looked like she was trying to take all this seriously but knew that everything here was beyond explanation. As such, she seemed to show she knew she was too smart for all this but couldn't find a way to balance embracing the insanity and trying to make it realistic. Hayes went a little more into playing up the "children's fantasy" element, but it's hard to make a hypnotism dance-off look anywhere near logical in this or the fantasy world. 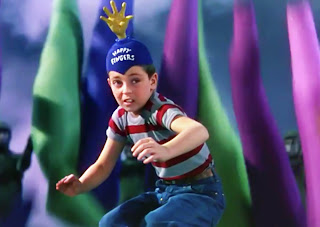 Rettig did a good job as Bart, plotting to save the world and his mother from the clutches of the mad pianist. Bless him for coming across as less crazy as he is forced to wear a beanie with a hand on top. His one solo, Because We're Kids, is surprisingly bitter about childhood and adulthood. It's not a bad song and it does capture how children can be frustrated about being ignored, but it seems an odd fit for a film sold as a light family romp.

There are some positive elements, such as the whacked-out production design full of Seussian eccentricity and equally whacked-out costumes. Some of the choreography is also good, so the film is not without some merits.

The 5,000 Fingers of Dr. T is a cult film. It's just weird, just weird. Many can embrace the weird, the oddball, the pretty much bonkers manner of this movie. It's a kids film for adults, as I still think some of the elements (such as anything involving the dungeon: song or dance) would frighten children more than enchant them.