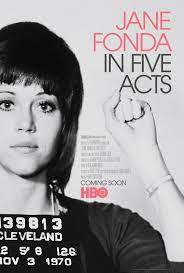 Few actors have been as wildly divisive as Jane Fonda. In the opening of the documentary Jane Fonda in Five Acts, none other than President Richard Nixon captured her best with his description of Fonda. "She's a great actress, she looks pretty, but boy she's often on the wrong track". At the then-age of 81, Fonda can look back on the highs and lows of her life and career. Jane Fonda in Five Acts hits some interesting notes but sometimes feels like a hagiography and slog to sit through.

As she reflects, Fonda divides her life into five acts: Henry, Vadim, Tom, Ted and Jane. The first is her father, Henry Fonda, and her efforts to both come out of his shadow and repair their frosty, distant relationship. Vadim goes into her first marriage to French director Roger Vadim, who essentially pushed her into becoming a sex symbol via his film, the erotic science-fiction Barbarella. Tom, which dominates the documentary, regards her second husband, activist Tom Hayden: their joint anti-Vietnam War activism, their almost strident lower-middle-class lifestyle and how her workout empire was created to fund their various causes. Ted is her stint with her third husband, media mogul Ted Turner. Jane is on her comeback to film. 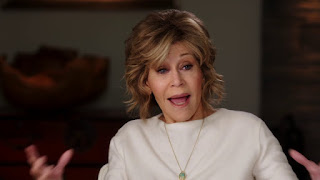 Jane Fonda in Five Acts does have surprising information. I think many people would not have known that her start as a fitness queen was due to finding revenue for her and Hayden's Campaign for Economic Equality. We also find that when she filmed the striptease opening to Barbarella, not only was the final footage the second take (the first ruined by a bat that had wandered in) but that she was drunk and hungover when she filmed it. Fonda, who was interviewed for the documentary, also admits that she wasn't crazy about Monster-in-Law but knew that people would see the film because of Jennifer Lopez. Maybe by appearing with a big star like Lopez, she speculates, people would discover or rediscover Jane Fonda.

At over two hours, Jane Fonda in Five Acts is surprisingly focused on Act Three: Tom. This is when her political activism was at its zenith, and Fonda does not come across as particularly pleasant. While the infamous footage of her sitting at an anti-aircraft gun with the North Vietnamese will always damn her to some people, Fonda's radio broadcast on Radio Hanoi during the trip is not as well-known.

Act Two has a news report on her separation from Vadim. It states that at one point, he called her "Jane of Arc", a wisecrack with which she was not amused by. Added Vadim via the report that "to take on the sins of her country, she has lost her sense of humor".

Truth be told, she still comes across as a bit of self-serious figure (she was not asked about Vadim's quips). In the footage from her Vietnam-era days, Fonda appears to openly criticize former prisoners of war as brainwashed, useful idiots for Nixon. She does state that "I'm proud of most of what I did (with regards the protest movement) and I'm very sorry for some what I did". Talk show host Dick Cavett, a friend and supporter, also seems to think dimly on her actions, calling them "tactless". 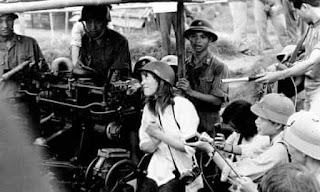 Later, when her son Troy Garity remembers how his first thirteen birthday parties were fundraisers for his parents' various causes, such details make Fonda almost unaware that her children became tools to further whatever cause du jour she embraced. Garity may find nothing wrong with that, but somehow that detail sounds a touch peculiar.

Jane Fonda in Five Acts does not delve into why her activism inspires so much ire. It is not self-reflective in that way. It is, though, on the personal, and we learn that despite being firmly feminist, for most of her life Fonda was dominated by men. There's the talented father who according to her late brother Peter "has to have the mask in order to express", an interesting way of saying Henry Fonda was emotionally lost without a script. Working with a dominating director, a firm activist and a macho persona respectively, Fonda could never balance a relationship with her own views.

In those moments, when we see Fonda evolve to being a Woman and person, we have good moments. When it comes to her career itself or her political activism, how she evolved to being a Woman of the Left, we get very little.

For better or worse, it will be difficult to nearly impossible to separate Jane Fonda the actress with Jane Fonda the activist. Jane Fonda in Five Acts is a good, albeit long, primer on her life and career as she sees it. What the final act or whole legacy will be remains to be written.