Pray Away: A Review 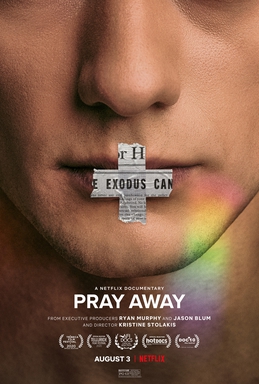 For a brief time in the 1980s and 90s, there was an "ex-gay" movement, where men and women were led to think that they could convert their sexual orientation through therapy of some kind. The documentary Pray Away looks at the former leaders and participants who now look back with regret and shame, though some still hold to the ideas they once professed.

Using a variety of archival footage and current interviews, Pray Away chronicles the once-held notion that through "reparative" or "conversion" therapy, a homosexual could be changed to heterosexuality. John Paulk, one of the interview subjects, soon became the face for the largest conversion therapy organizations, Exodus International. He claimed to have become straight, even marrying a woman who said she was now an ex-lesbian. Michael Bussee, cofounder of Exodus, saw a need for a support group for gay men who were also Christian, modeling his idea on other support groups within the Church.

Soon, however, Exodus became a center for the idea that homosexuals could transition to heterosexuality. Other groups either sprung up or became affiliated with them, such as Living Hope, where Julie Rodgers fell under the control of its founder, Ricky Chelette. Eventually, Exodus International delved into the political, faced scandal when Paulk was photographed at a gay bar, and eventually closed its doors with deep regret for the lives it hurt.

The closest thing to any kind of rebuttal is that of Jeffrey McCall, who is a "Trans for Christ". McCall says he was transgender until a religious conversion and now identifies as the male he was born as. He forms a Freedom March where a small but passionate group of believers spread the word that change is possible in their minds. 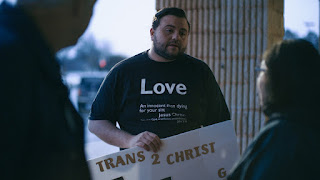 Pray Away is best when we hear from those who brought about this brave new world. Hearing how some were pushed into sharing deeply personal details is extremely upsetting. One senses that the various ex-gay groups such as Exodus sound almost like a cult: once you leave the group and embrace the homosexuality/bisexuality within yourself, you are cut off completely. We also get to see how some of the former leaders have changed into new lives; some like Rodgers have a same-sex wedding ceremony at a more progressive church (I think it was the National Cathedral). Others, like former Exodus spokesman Yvette Cantu Schneider accept they are bisexual, happily married to a man while not denying their same-sex attraction.

However, like other documentaries and films detailing the struggles between Christianity and Homosexuality (example, Boy Erased), Pray Away treats Christians not as people but as almost alien creatures, these bizarre figures who come from another world. From what I saw in Pray Away, those participating to change their orientation were sincerely looking to adopt their ideas of faith and lifestyle and were not motivated by malevolence. Bussee for example apparently merely wanted to form a support group for same-sex attracted Christians, not literally change their orientation.

When did the shift from support to conversion take place? Was that the plan all along? Granted, those who still maintain that sexual conversion can take place, such as Paulk's former wife Anne who has her own group, Restored Hope, declined to be interviewed. However, it is hard to say that the motivations for the churchgoers who listen and support someone like McCall are wicked. We do not hear from them or from anyone who would call themselves a gay Christian. Again, while that is not the focus of Pray Away one senses that the filmmakers see Christians as a source of antagonism, an idea I can't share.

From appearances, someone like McCall who detransitioned may be less brainwashed and a genuine desire to be male. It might even be due to a sincere religious experience. To the film's credit, McCall is allowed to share part of his story, though again one senses that it is a surface look. 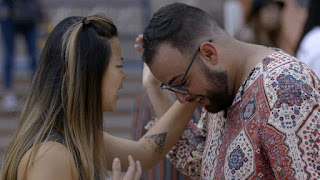 As a side note, I find that both Christians and gays are too hung up on sex. It's a curious thing that those who look askance at people who believe homosexuals can change to heterosexuals sometimes fantasize that a straight person can enjoy a same-sex encounter or even themselves be converted from heterosexuality to bisexuality or even homosexuality. I would argue that sexuality is again very complex, not fitting easily for everyone. I would also argue that evangelical Christians are not the boogeyman some in the LGBT community continue insisting that they are. For whatever faults some evangelicals have, they have never advocated tossing gays off buildings, let alone done so. At least that I am aware of, but I digress.

Pray Away seems to be a surface look at complex issues revolving around sexuality, faith, and the conflict between the two. There are people who have reconciled their same-sex desires with their faith whether through seeing no conflict between the two or deciding for a celibate life for themselves. One watches and sees that perhaps we are merely skimming through things. If, for example, people put the blame on their same-sex attractions due to toxic parenting or abuse, it would be better for them to get treatment for the parenting/abuse versus putting their attractions squarely on that. For good or ill, Exodus fed a need among believers who found their attractions could not be reconciled with their ideas of faith. I am more curious as to the apparent need within some to "be cured", but Pray Away doesn't delve into that.

Some mention is given that perhaps groups like Exodus came about as a reaction against the growing AIDS crisis, where promiscuity was literally killing people, but whether the ex-gay movement really was a response to fear one does not know. Again, I was curious about such things, but again Pray Away didn't go into that.

We do not know what drove some of the ex-gay and ex-ex-gay movements. Perhaps some were to force changes in people or to cash in on therapy fees, but others appear to be genuine in their beliefs about changing. I think it would be too simplistic to say it was merely a desire to conform, and humans are too complicated to put it down to simple answers. Pray Away isn't going to dig into motivations, but it is good to hear from those both who found their journey harrowing and those who are barely starting their own.