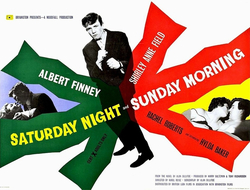 Factory machinist Arthur Seaton (Albert Finney) hates his job and isn't particularly thrilled with his working-class life. He sees people like coworker Jack (Brian Pringle) as essentially saps: Jack is pretty satisfied with his life, Arthur most certainly not.

Arthur is satisfied with Jack's wife Brenda (Rachel Roberts) whom he has been having an affair with. Arthur may bed Brenda, but he does not love her, let alone the prospect of marriage. Then comes brassy Doreen (Shirley Anne Field) who piques his interests but who doesn't give in easily to our brash young man. He starts dating Doreen while still seeing Brenda and thinks nothing of his double dealing.

That is until Brenda tells him she's pregnant. As she and Jack haven't had sex in months it's clear who the father is. Efforts to induce an abortion fail, with Arthur desperate to get out of this mess. Things culminate at a local fair where Brenda opts to keep the child but Jack, along with his soldier brother, discover the lovers. Arthur still manages to avoid personal scandal and Doreen is staying by his side, but will he fully commit? 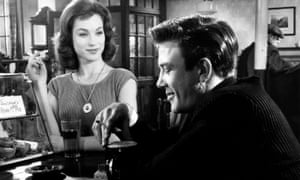 We see that mix of arrogance and anger early on when he's in an informal drinking match with a sailor. Arthur appears better able to handle his liquor, even up to "accidentally" spilling beer on an older couple. It isn't until he steps to the outside when he stumbles down the pub staircase that we find Arthur is more self-destructive and foolish than antihero.

Finney keeps the audiences' attention throughout Saturday Night and Sunday Morning, down to having opening and closing voiceovers. I found Arthur a very selfish man but not a monster, a credit to Finney as an actor.

Director Karel Reisz also gets great performances out of the rest of his cast. Field's Doreen is nobody's fool, able to stand toe-to-toe with Arthur, but we also see that she dreams of domesticity in the same way Arthur recoils from it. Roberts' Brenda manages not to be either a shrew or a tramp, but a woman who loves the freedom Arthur embodies while also remaining aware of his danger. 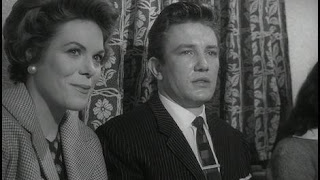 Reisz, working from Allan Silltoe's adaptation of his own novel, brings almost a cinema verite manner to Saturday Night and Sunday Morning. At times it does look like a documentary, and we get the sense of what life would be like for a working-class lad in early 1960's Britain.

Perhaps this is why it didn't hit me as hard, the passage of time and the idea of upward mobility watering it down a bit. Also, some sections such as a sequence involving Arthur shooting pellets at local gossip Mrs. Bull (Edna Morris) seemed more curious comedy than true to the the lives of unquiet desperation so many post-war youth led. Almost everything involving Mrs. Bull seemed more like early Eastenders or Coronation Street, or at least precursors.

That's a minor complaint on the whole thought. Saturday Night and Sunday Morning is a showcase for early Albert Finney and a time capsule of when the "angry young man" ruled the thoughts of the British. It's a curious thing about the British: seemingly worshipful of the lives of aristocracy while simultaneously fascinated with the working-class.