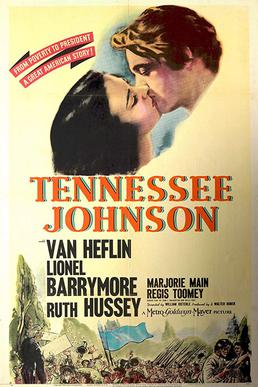 In real life, President Andrew Johnson and President Donald Trump have much in common. Both were single-term Presidents. Both were seen as uncouth by the "elites" and "swamp" of their day. Both were impeached on flimsy but politically motivated charges by a Congress with a near-pathological hatred against them. Both had the misfortune to follow popular and beloved Presidents into office. Both were irascible, short-tempered men who could not control themselves and who did themselves more harm whenever they spoke (one of the eleven articles of impeachment against Johnson was about him making "inflammatory remarks" against Congress, which oddly was not included as a "high crime and misdemeanor" against Trump).

Runaway indentured tailor Andrew Johnson (Van Heflin) manages to escape to the safety of Tennessee, where the local community embraces his sewing skills and shelters him. He soon becomes not only an important member of the community but has found love and education through Eliza McCardle (Ruth Hussey). The local librarian and illiterate tailor soon fall in love and marry. 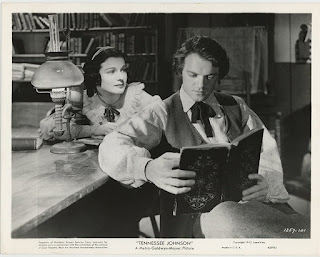 Johnson is a fierce man of the people, unimpressed with the powerful and holding the radical idea that all free (white) men should have the right to vote, not just property owners. His political career rises, culminating in being Vice President under Abraham Lincoln in a unity ticket. Johnson is not afraid to face off against his own people when it comes to secession, up to not following fellow Senator Jefferson Davis' lead in resigning to join the Confederacy.

However, Lincoln's assassination elevates the drunk Johnson to the Presidency, and he's made a powerful enemy in Senator Thaddeus Stevens (Lionel Barrymore). Their war reaches a culmination when Stevens manages to bring about impeachment proceedings against this upstart. Now Johnson has to fight for his Office while attempting to control his temper. Ultimately, he manages to barely hold on.

Tennessee Johnson is open about how while the film is a biopic, it is not without as it puts it "certain dramatic liberties". As such, the film gives us a very polished portrait of the cantankerous Johnson, barely hinting at how belligerent and drunk he could be. While Tennessee Johnson paints Johnson as a decent man who saw Eliza as his muse and comfort, it isn't a hagiography. 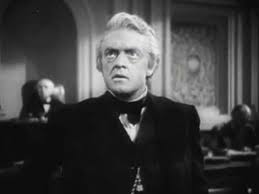 The success of Tennessee Johnson is due in very large part to Van Heflin's performance. He makes Johnson a sense of honor and conviction but also a man of doubts and fears, one who is so intimidated by the idea of Lincoln that he appears clearly sloshed at his Vice Presidential swearing-in. The role allows Heflin to give an elegant and intense performance. He has what all actors want: a dramatic monologue when addressing the Senate trial (which did not happen in real life). At times, Heflin as Johnson seems to almost address the viewer directly.

In supporting roles, Hussey manages to transcend the surprisingly thin role of "supportive wife" into making the First Lady into a stronger figure, loving, supportive but not worshipful. Barrymore is excellent as the villainous Stevens, convinced of his own righteousness in taking down the "evil tyrant" Johnson.

It's a credit to director William Dieterle that he not only drew out strong performances from his actors but for also sneaking in moments of romance and even suspense when a Senator falls ill and has to all but be dragged back into the chamber to vote. Dieterle ratches up the suspense as to whether Senator Huyler (William Farnum) will vote Guilty or Not Guilty.

As a side note, "Huyler" is the name used for real-life Kansas Senator Edmund Ross, who cast the deciding vote to acquit and saved Johnson's removal from office. Why exactly Huyler voted as he did is not clear, though to be fair neither is Ross' rationale.

Tennessee Johnson can be seen as a product of its time, showing the need for the government to work together and the importance of "the common man". Again, this film may not be history but it tell an interesting story and is well-acted. At the most, perhaps a remake could be mounted or a film of Senator Ross, a Profile in Courage. On the whole, the film works well and makes for interesting if not accurate filmmaking.