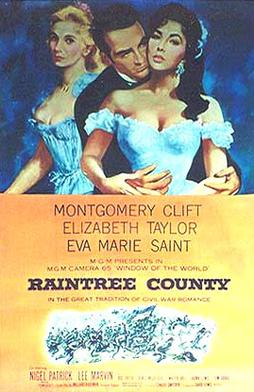 It is somewhat hard to watch Raintree County without remembering that the film came at an especially tumultuous time in the life of one of its stars. Montgomery Clift was in a horrific car accident during its troubled production, causing physical and emotional scars that eventually doomed him. Even if Clift had not been overwhelmed by his personal problems, Raintree County would still be a low-mark in his cinematic oeuvre, a slow, dull, almost nonsensical affair barely saved by its leads.

Indiana idealist Johnny Shawnessey (Clift) is lured away from his true love Nell (Eva Marie Saint) by fiery Southern belle Susanna (Elizabeth Taylor). John struggles with many things in this relationship, though oddly his efforts at reconciling his abolitionist views with marrying into a slave-owning family is the least troubling part. Susanna is to put it mildly flat-out bonkers.

She keeps a creepy doll collection that she hangs over their bed. She may have had a hand in the murder of her parents and loyal "mammy" (though the term is not used in the film). She may also be, horror of horrors, "Negro" herself (or as she puts it in her determined Southern accent, "Nee-grah"), as she is driven to near-insanity on the thought that her "mammy" may actually be her biological mother.

Enter the Civil War. Initially, Johnny does not join the military, but once Susanna has gone back to Georgia and taken their son with her, he joins the boys in blue to find them both. A long search reunites Johnny with his son, but by now Susanna is institutionalized. He brings her back to Indiana where one of these meets a grisly end. 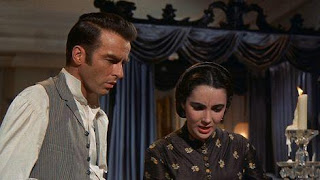 It was probably a surprise to viewers to see a film where Montgomery Clift is playing the sane and calm one in the midst of all the rambling, sometimes confusing storyline. I should say "storylines", as Millard Kaufman's adaptation of Ross Lockridge, Jr.'s novel at times is chaotic and/or unclear. Raintree County spends perhaps a good half hour or more on an extended tangent involving a randy Professor (Nigel Patrick) and a footrace with a local man, Orville "Flash" Perkins (Lee Marvin). You keep waiting for them to pop up again, and they do eventually, but by that time you've lost interest in the film as a whole. 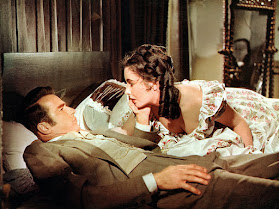 Moreover, as you watch Raintree County, you kind of think the Professor's story would make for a more interesting film than that of the love triangle of Johnny, Susanna and Nell. Raintree County to its credit has its three leads doing good work in this tawdry tale of the Old South. Clift works hard to make Johnny an idealist, even if at times he comes across as rather dim (why would he agree to stay with a woman who faked a pregnancy to snag him). Taylor is fully committed to make Susanna into a tragic figure, though her wild Southern accent and near hysterical manner make her hysterical in the laughable sense.
"You HATE ME! YOU HATE ME BECAUSE I'M SOUTHERN!" she screams out at one point. I figure that maybe the filmmakers wanted to say "colored", the vague suggestion of miscegenation hovering over this but never fully rationalized. Still, Taylor was hell-bent on going all cray-cray, making Saint's more demure Nell look less rational and more slightly bored.
Bless Lee Marvin, who decided he was in a whole other film altogether and acted as though Raintree County was about Flash. Same goes for the parody-ready Patrick as the Professor, whose whole character started out as a joke and never shifted.
If Raintree County  has anything good in it, it's in the technical aspects such as the score and costumes, but apart from that it's a slog to sit through. Clift, Taylor and Saint did the best they could, and it's a credit to director Edward Dmytryk that everyone managed to survive this cure for insomnia, but there's nothing to make this worth your time.

Raintree County could best be described as Gone With the Light Breeze, a Southern epic romance that fails to be epic or romantic.

One final note: the constant mention of "Raintree County" brought back to mind the endless repetition of "Moses" in The Ten Commandments. One could make a drinking game over how often "Raintree County" is mentioned, and be positively drunk before Taylor goes really off the deep end.