Let Him Go: A Review 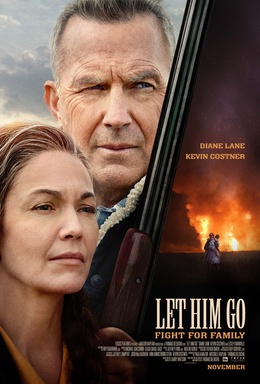 Grief, loss and bonds of family good and bad are the themes in Let Him Go, a sparse, quiet, moving film with three dynamic performances that push the film even higher.

After the death of their son, retired sheriff George Blackledge (Kevin Costner) and his wife Margaret (Diane Lane) sadly see their daughter-in-law Lorna (Kayli Carter) marry a Donnie Weboy (Will Brittain), making Donnie stepfather to their grandson Jimmy. Donnie is bad news: Margaret sees him abuse both Lorna and Jimmy and her fears grow worse when the Weboys leave quickly.

Margaret decides to search for them, a very reluctant George going with her. Using the few clues they have the Blackledges track them from Montana to North Dakota, where George's instincts tell him the Weboys are dangerous. This is confirmed when they meet the extended family, in particular the matriarch Blanch Weboy (Leslie Manville). She's a cold, brutal woman who terrorizes her criminal, brutal sons and who despite Jimmy not being blood relation will not let Jimmy go back with the Blackledges, let alone have Lorna go with them.

A botched escape costs George dearly, but it also sets him on a fiery collision course with the Weboys. With the help of shy Native American Peter Dragswolf (Booboo Stewart), the Blackledges and Weboys have one last encounter where not everyone survives. 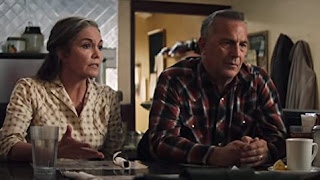 Let Him Go appears to draw inspiration from both No Country for Old Men and Unforgiven, though it is not as nihilistic as the former or mournful as the latter. There is a sparseness, a quiet elegiac manner to Let Him Go that holds the viewer.

The film is very quiet, but it is a quiet confidence. Every disagreement that George and Margaret have does not have a massive buildup, but instead a soft yet strong manner. Even in the times when there is open menace, the quiet manner makes it all the more tense.

The scene where George and Margaret must dine with Blanche is filled with tension and menace. All the elements work to give this scene a richness and power that holds you and ratchets up the tension. There's writer/director Thomas Bezucha's staging, where we start without seeing Blanche's eyes.

And then there's Leslie Manville's performance. Manville is simply extraordinary in Let Him Go. Thoroughly unrecognizable, her Blanche oozes menace, contempt, hatred and evil, a woman who has so cowered her bullying, brutish sons that she brooks no opposition. 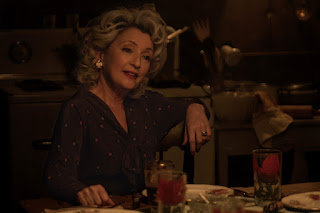 Blanche does not bother hiding her cruelty, the falsehood of her demeanor clear to all who see her. If she were in just that one scene, Manville would be almost a certain lock for her second Best Supporting Actress nomination. However, she returns, this time more spiteful and nasty, making Blanche into such a loathsome villain that you almost cheer when she gets what she more than deserves.

Manville is able to dominate the screen without chewing the scenery, making Blanche a realist person, a massive credit to her as an actress and Bezucha as director.

Almost as a counter, Lane and Costner are more quiet but no less commanding. Lane's performance is equally strong. Margaret is not naïve or foolish as she is quietly confident. Her quiet moments, grieving her son, communicating with the shy and wounded Peter, agony over having Jimmy pulled from her, make Lane's performance a deeply moving one.

Costner essentially took a backseat to Lane, and yet by withdrawing he simultaneously shone. In his silences, his reticence, Costner reveals the shrewd, suspicious and supporting spouse who while seeing the difficulty if not impossibility of rescuing Jimmy also is quietly sparked to action.

While their roles were smaller, both Carter and Stewart left strong impressions as Lorna and Peter, each wounded and abused in their own way.

Let Him Go is as I said a very sparse film in just about every element. Bezucha's adaptation of Larry Watson's novel is not filled with big dramatic moments apart from the fiery finale. The cinematography is also as sparse and empty as the Dakotas and an uncharacteristically quiet Michael Giacchino score has a deeply mournful, quiet manner.

Let Him Go may be a bit longer than perhaps it should be, primarily through the flashbacks. However, that is a minor quibble, for Let Him Go is a deeply moving, beautifully acted film that I think will move audiences.