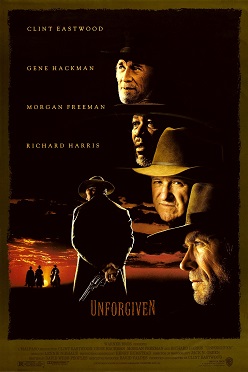 How The West Was Truly Won...

The first time I came across Unforgiven, I think both the subject and the length made me wary of it.  The violence, the darkness, of it all played in my memory, so much so that I could not remember if I had seen it when it was first released.  Well, the passage of time and the Best Picture retrospective have brought Unforgiven back into my life.  I think of what John Ford's The Man Who Shot Liberty Valance said: "When the legend becomes fact, print the legend".  Unforgiven goes against Ford's maxim, and gives us a very unvarnished, unpleasant, ugly West.  Unforgiven is a dark, somber film, but one that is brilliant in the exploration of redemption (and lack thereof), of the struggle between justice and revenge, and how what we know of The West is built on myth, a myth perpetuated by those who themselves knew better.

Big Whiskey, Wyoming, 1881.  Delilah (Anna Thompson) a novice prostitute, starts laughing when one of the cowboys she's servicing undresses, revealing what she considers a particularly small penis.  Enraged, the cowboys slashes her face.  The main whore, Strawberry Alice (Frances Fisher) is enraged that the brother owner, Skinny Dubois (Anthony James) is willing to take compensation for the assault rather than pursue actual punishment.  Dubois doesn't care for his whores, just for what he can get out of them.  For his part, "Little" Bill Daggett (Gene Hackman), the local sheriff who insists no guns enter Big Whiskey, would rather keep the peace than get justice for the women.  Furious, the whores collect a bounty and offer it to anyone who will take the two cowboys involved in the assault.

Enter The Schofield Kid (Jaimz Woolvett), a young cocky gunfighter who wants to make his mark.  He hears of the bounty and wants at it, but he needs help, and goes to legendary gunfighter William Munny (Clint Eastwood).  We learn earlier that Munny was a notorious murderer, but that he married a quiet woman who helped reform him, and he became a widower in 1878 with two young children.  The former bad man is now one filled with regret for his actions, and has sworn off violence and booze.  However, he is a failure as a farmer, and the bounty will provide for his children.  With that, he rides out to meet the Kid and insists on taking his old riding partner, Ned Logan (Morgan Freeman) on the job.

Back in Big Whiskey, Little Bill is too obsessed with building his house to care what the whores are up to, but he is aware of a new and unwelcome visitor.  English Bob (Richard Harris), 'legendary' British gunfighter has come to get at the reward too, accompanied by his biographer W.W. Beauchamp (Saul Rubinek).  Beauchamp, writer of pulp Westerns, thinks English Bob will make a great subject for a book, giving the book and the subject the grandiose title of The Duke of Death, which Little Bill keeps referring to (accidentally or not) as The Duck of Death.  Little Bill knows English Bob and the truth behind The Duck's exploits (and it helps that he has to power to lock him up).  Little Bill throws English Bob out of Big Whiskey, but Beauchamp stays on, fascinated now by Little Bill's exploits, which are technically true but also rather unsavory.

Munny, Logan, and The Kid enter Big Whiskey, but Little Bill doesn't know who Munny is.  The three of them do manage to escape, but not before Munny gets beaten by Little Bill for having a gun in town despite his law.  While Munny recovers out of town, he learns about Delilah's life and how she did not deserve what she got.  The three of them do eventually manage to kill one of the cowboys, but now Logan and Munny find that this life of violence is no life for them.  Logan opts to get out, while Munny is honor-bound to complete the job.  He and The Kid do, but now The Kid finds the violence too much for him.  Despite all his bragging and boasting, he's never killed another person in his life and it takes just one kill to have him forever renounce violence.

Delilah has bad news for Munny: Logan, despite being the one who leaves, was captured, tortured, and killed by Little Bill.  Munny, enraged, goes into Big Whiskey for one last confrontation to avenge his old friend and get Logan buried, Little Bill using his corpse as a warning to those who would enter town.  There is a final confrontation between these two old gunslingers, and after Munny kills the unarmed Little Bill, he rides out, warning them all that if Logan isn't given an honorable burial and the women left alone, he will return to kill them all.

We end Unforgiven as we began it, with Munny in profile, learning that his mother-in-law came years later to see where her daughter was buried but not finding Munny or the children there.  They moved on, to California, where Munny became a merchant, removed from his former life.

Unforgiven is a meditation on the act of killing, captured so well by Eastwood's "It's a Hell of a Thing, Killing a Man" monologue.  In a way, Eastwood's film is a declaration against the mythology of the Old West that he has been so closely associated with.  Beauchamp is both the promoter and follower of Old West tales with his stories of English Bob and Little Bill.  He isn't chronicling the Old West as it really was, but as how he would like it to have been: full of action and adventure and daring-do.  The Schofield Kid too is one who was taken in by the myths of the Old West.  He too only saw the action, the thrill, the adventure, but when it came down to doing the actual dirty work that the old men like Munny, Logan, even Little Bill did, he couldn't do it.

Unforgiven strips the ideas we have of the Wild West and makes it into a story about how this violence cost people their lives and their souls.  It was not romantic or exciting.  It was dark and ugly and brutal.  It is a bit reminiscent of All Quiet on the Western Front.  Just as that film brought no honor to the brutal act of war, Unforgiven brings no honor or glory to the taming of the West.  In short, Unforgiven is not a romantic Western, and that is part of its brilliance.  We can dispense with Western clichés and instead see the story Eastwood is telling: how the world is not black-and-white, how the truth is more brutal than the fiction we accept.

Eastwood's directing is very sparse, very simple.  He doesn't complicate shots with a lot of cutting.  One moment that impressed me was when English Bob first comes to Big Whiskey.  Eastwood doesn't jump from one person to another.  Instead, he lets the camera move between them, giving us almost a 'you-are-there' style, as if we were moving back and forth between them all.

Eastwood also directed all his actors in an extraordinarily excellent way.  Hackman was brilliant as the blunt but brutal Sheriff, a mixture of evil and cold-eyed realism.  In his own way, Little Bill has his own dreams (that house he constantly works on), but his actions will deny him the house that is his great passion.  I am conflicted on Little Bill: he is direct about his ideas of justice and the law but he is also hard and cold.  Thompson is almost innocent as the injured hooker, and Woolvett is cockiness exemplified as The Kid.  We should know it is all an act, and both Woolvett's performance and Eastwood's directing of it shows that The Kid is really a front for a good man taken in by the myth.  Freeman lends dignity as Logan, who is just as weary of the bloodletting as Munny.

It is difficult to direct oneself, but Eastwood can do it.  His William Munny tries desperately to be the man his late wife made him into, but slowly he wears down to his old self.  Having seen the darkness he can so quickly slip into, he knows enough that so long as he is close to temptation, he will never break free.

About the only real flaws in Unforgiven are the length and the English Bob storyline (the both tie into each other).   It's always nice to see Richard Harris in a Western, but if he was the entry for the Beauchamp character, it would have been easier to get him to see Little Bill or just come to Big Whiskey to do a story about the whores and get sucked into this world.  The entire English Bob story lengthens the film and it makes things feel longer than the two-hour plus running time.

Apart from that, Unforgiven is a beautiful film, a thoughtful meditation on the difference between myth and reality, on killing, on how justice doesn't always get it right.  As he lays wounded, Munny standing over him ready to kill him, Little Bill, in his fury, says he doesn't deserve this.  "Deserve has nothing to do with it," Munny replies before ending Little Bill's life.  Unforgiven, the last Western to win Best Picture (so far) is an elegy to the image of the West, a farewell to the ideas we all have about this period.  Eastwood didn't print the legend.  He did make a brilliant film.