Like the 2016 GOP Presidential campaign, the 88th Academy Awards was one wild and unpredictable ride.  They had good moments (Mark Rylance), bad moments (Leo), and ugly moments (Sam Smith), fitting in a year where Ennio Morricone won his first competitive Oscar...at age 87.

First, a quick recap of our winners.

Usually, Best Picture, Best Director, and Best Film Editing go hand in hand, but this year, each category went with a separate winner.  Again, unpredictable was this year. 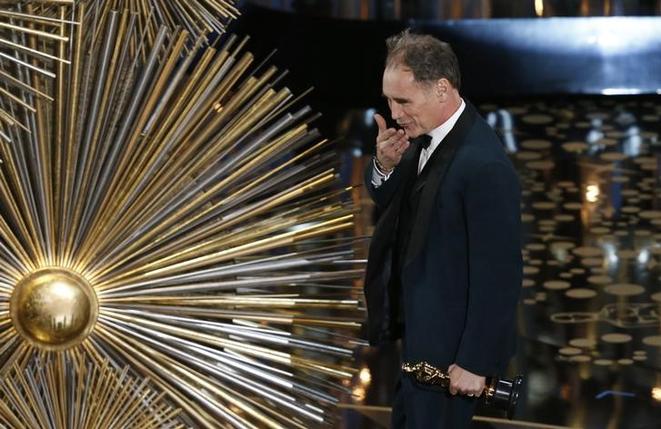 Let's talk briefly about some of the upsets. I think at the top of that list is Mark Rylance's win for Bridge of Spies.  I think the audience was genuinely shocked when his name was announced, not even those that voted for him expecting him to actually win.  Most predictions pegged Sylvester Stallone as the winner for his turn in Creed, with both Christian Bale and Mark Ruffalo being the dark horses.  Rylance's name I don't think was even considered, one of those 'it's just an honor being nominated' type of thing.

However, the Supporting Actor category is one where genuine upsets have the best chance of taking place.  Three years ago, most oddsmakers had Tommy Lee Jones all but certain to win for Lincoln, only to find Christoph Waltz coming from behind with his win for Django Unchained.  Also, Best Supporting Actor is no longer the de facto Lifetime Achievement Award it might have been once (just ask Burt Reynolds).

Rylance was the highlight of Bridge of Spies, and even its detractors never said anything bad about his performance.  Yet I don't think anyone, not even Rylance, expected him to best Rocky.  Sadly, Stallone joins Al Pacino and Cate Blanchett as being the only people nominated for earning nominations for playing the same role in two different films...and losing both times.  Worse for Sly, unlike the other two (and Bing Crosby, the first to be nominated for playing the same role in two different films), he has yet to actually win for any.

I think the bigger shock was Ex Machina's win for Visual Effects.  I think most people expected either the bombast of Mad Max: Fury Road or the spectacle of Star Wars: The Force Awakens to win.  As I've yet to see Ex Machina I cannot say whether it was a worthy win, but I do think that a film where the visual effects served the story rather than drown it shows a positive sign in the Academy.

Now comes the bad.  As expected Leonardo DiCaprio won for The Revenant (or as I call it, Leo's Most Recent Naked Oscar Plea...and in this case, literally 'naked').  I think his win is bad for these reasons.  First, he didn't win for this specific role.  He won because too many people, both inside and outside The Academy thought he was 'overdue', in essence turning this into a de facto Lifetime Achievement Award (odd given he's only 41).  This idea that it was 'his turn', not his breathing and endless suffering in The Revenant, is what got him the Oscar.  Again, I haven't seen all his competition (though I will immediately dismiss Eddie Redmayne in anything), but this idea that DiCaprio should have won because it was time for him to win for something, ANYTHING, is unfair.  He's given better performances in other films (The Wolf of Wall Street, The Aviator), and the idea that one should get Oscars because he/she has been overlooked too many times in the past is like giving someone a promotion because he/she has been passed over for one many times...even if there are better candidates.

Second, it was bad because it gave DiCaprio another opportunity to lecture the world about his pet cause...global warming/climate change.  Somehow, DiCaprio has it in his head that he's some sort of environmental expert, and that we are all beholden to him for wisdom and insight into such matters.  Given his penchant for large luxury boats and private planes which both use up large amounts of fuel and leave a much larger carbon footprint than I do, one wonders why he cannot see the disconnect between his words and his actions.  My fellow critic Christian Toto holds that this is hypocrisy.  I think it is merely disconnect: DiCaprio holding a view that rationalizes his own lifestyle going against his tenets with the idea that its the message that is important, not the messenger.

The political messages came in loud and clear with Adam McKay and Charles Randolph's Adapted Screenplay for The Big Short.  With their calls to break up the big banks and not allow the political process to be used by 'millionaires and billionaires', it was a millimeter short of asking everyone there to #FeelTheBern.

As a side note, I'd like to point out that the man who made Step Brothers has an Oscar, while the men who made Vertigo, Magnificent Obsession, Sunrise, Red River, The Blue Angel, and Metropolis never got one.  Just a thought there.

Now we get to the ugly, and I do mean UGLY!  I really don't have an argument against any of the winners (well, I didn't think Inarritu was the Best Director, but I'm not going to go to war over it).  That is, except for one category...

Let's take a look at the Best Original Song winner.  The songwriters brag about how the song was written in 20 minutes, and the track was recorded in one take.  With that, Writing's On the Wall from SPECTRE beat out the OTHER song from That Porn Movie and three songs few people had heard of.  OK, so maybe it was a weak field where the BIG song ends up winning (something that would probably not have happened if Love Me Like You Do from Fifty Shades of Grey, not Earned It, had been the nominee).   However, I have not heard anyone make the claim that Writing's On the Wall is a.) a great song or b.) even a good Bond Song.  On the contrary, Writing's On the Wall is thought of as one of the worst Bond Songs to come down the pike in a long time.

Yet there he was, rocking back and forth as if he were holding on to the microphone stand for dear life, not hitting the high notes he wrote for himself.  Compare Smith's recreation of a building undergoing an earthquake to The Weeknd's confident performance of Earned It and Lady Gaga's masterful performance of 'Til It Happens to You.  Despite how his performance was a shambles and the song dreadful, there he is, joining Rodgers & Hammerstein, Lerner & Lowe, and Stephen Sondheim.

OK, so I'll grant that Smith, not the brightest bulb, misunderstood Sir Ian McKellen's observation that no openly gay man had won an ACTING Oscar and mistook that for no openly gay man having won ANY Oscar (a point of contention Milk screenwriter Dustin Lance Black took umbrage at...as well as Smith allegedly hitting on Black's lover, diver Tom Daley).   However, Smith decided that his win was a historic point, a turning point in history equaling, perhaps even greater than the Obergefell v. Hodges Supreme Court decision legalizing same-sex marriages in the United States.  Therefore, he was going to dedicate his win to the LGBT community.

I'm sure ISIS will stop throwing gays off buildings now that the sensitive singer of Stay With Me has a gold statue.  I'm sure no kid will get thrown out of his/her house now that Sam Smith was given a prize for writing a song in 20 minutes.

I think his declarations of greatness both artistically and morally feed into the millenials general narcissism, this sense that they know all and are better than all.  Look, kid, let me put the writing on the wall:

I blame Adele.  Ever since all my fellow critics went into orgasms over Skyfall, they'll let any old piece of crap win.  Here were all these critics saying how Skyfall was THE GREATEST SONG WRITTEN IN THE HISTORY OF ALL MANKIND, greater than Over the Rainbow, greater than Amazing Grace, greater than Goldfinger or Nobody Does It Better.

I love Adele, but Skyfall was junk.  Its lyrics were inane ("So overdue I owed them".  Bet George & Ira Gershwin wish they could write such music).  It's also pretty much forgotten now.  People still remember Goldfinger and Nobody Does It Better and even A View to A Kill, but Skyfall?  Same with Writing's On the Wall.

I warned that Skyfall was terrible and that it won only because people LOVE Adele.  I similarly warned that Writing's On the Wall was even worse...and it went on to win.  Only this time, at least my fellow critics woke up and said it was terrible.  Wasn't enough to stop the crazy train from overtaking the Oscars.

At least the music department got SOMETHING right with Morricone's win.  At last the Legend gets a real Oscar.  So what if he doesn't speak English?  Seeing the dignified old man receive his well-deserved Oscar warmed my heart.  His elegant speech making special thanks to John Williams (the last great American film composer as far as I can tell) was beautiful and takes the sting out of DiCaprio's illegitimate win and Smith's horror.

That, and seeing Eddie Redmayne go down in flames.

At least I have those.

Well, let's hope we get better songs next year, and movies as good as we got this year.
Posted by Rick at 9:31 PM