More revelations are in store for Supergirl in Hostile Takeover.  We get bits of comedy and a subplot involving corporate sabotage and unmaskings both personal and professional.  We also use this mid-season finale to give us something that might surprise the fans: the discovery of Kara Danvers' alter-ego: SUPERGIRL!

There's a scandal brewing at CatCo Media.  The private emails of Cat Grant (Calista Flockhart) have been hacked.  Cat isn't too concerned about most of the information becoming public (albeit the fact her true age is exposed is irritating).  She tasks her flunkey Kara Danvers (Melissa Benoist) to find out who is the leak, and tells her to recruit "that handsome little hobbit who has more cardigans than you do".  That would be Winn Schott (Jeremy Jordan), who already works with Kara as her eyes and ears when she is Supergirl.  Cat also gets James Olsen (Mehcad Brooks) to join in, while Cat struggles to hold on to her company.

Kara already has problems of her own: her crazy Aunt Astra (Laura Benati), who has managed to neutralize kryptonite, tells Supergirl her mother wasn't the person she thought she was.  Kara is devastated by the idea that her mother may not have been the wonderful person she remembered, and this conflict eats at her.  Astra, with her lieutenant/husband Non (Chris Vance) is up to something, but things are still unclear.  Astra cannot kill her niece now (which is what Non wants) but she also speaks about not allowing another world to be destroyed.  Could Astra be an eco-terrorists?

As far as Cat is concerned, nothing really damaging has been exposed, but she suspects this is a ploy to push her out of CatCo. At the top of the list is Dirk Armstrong (Peter McKenzie), whom Cat has described in her emails as 'the walking personification of white male privilege' (been there, done that).  It's up to Kara, Winn, and James to expose the board member without getting caught.

About the one thing Cat would rather not want revealed is the existence of Adam Foster, a 24 year old in Opal City that Cat has been sending money to.  Hush money?  Sugar baby?  No, Adam Foster is her (other) son, whom she has kept secret all these years.  Rather than expose him to the public scrutiny, Cat decides to resign.  However, the work of Winn, James, and Kara all  help expose Dirk.  This exposure however, makes Cat think that Kara IS Supergirl, a hunch she confirms to herself when she asks Kara to remove her glasses.

As for the family feud, Astra manages to get herself captured and wouldn't you know it: it all looks like a big ploy to create a diversion while Non goes after the real target.  That would be Lord Technologies, where Maxwell Lord (Peter Facinelli) is awaiting something.  His weapons, while good, are no match to Non and his minions, and Supergirl now must do battle with her aunt's husband (no one ever refers to him as her 'uncle', so I figure Astra married him later in prison).

It's been more than a few weeks since I've seen Hostile Takeover and I can't quite put a reason as to why I liked it so much.  I think again we must thank Benoist for her absolutely winning performance, or should I say performances. She plays the slightly bumbling Kara and the still maturing Supergirl with equal grace.  The struggle between her idea of her mother and the potential reality of her mother cause Supergirl great anxiety, and Benoist plays this so well. 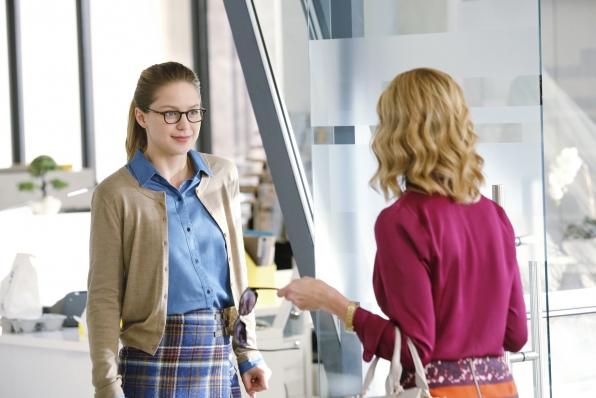 Another great aspect of Hostile Takeover is the interplay between Flockhart and Benoist.  Again, we see the heavy mask Cat wears slip a bit, giving us a human beneath the cold exterior.  Truth be told, Grant has sacrificed a great deal to get where she is at, and we see that perhaps she regrets it.

However, at least Hostile Takeover gave us a story where, unlike Perry White back in Metropolis, Cat Grant actually could figure out that Kara is Supergirl.  A casual remark about overhearing Dirk when both Kara and Cat were too far away for human hearing piqued her interest, as did the fact that neither Kara and Supergirl were ever in the same place at the same time.

One more positive is the interplay between Jordan and Brooks, in particular by the former who can barely mask his overt hostility: the hobbit disliking the hold the hunkier photog has on the woman he loves.

I thought the Astra storyline worked well, though the other hostile takeover seemed a bit of an afterthought.  Not terrible, but not something that grabbed me.

Yes, I can't quite put my finger on why I liked Hostile Takeover, but liked it I did.