Sons of Liberty: The Miniseries 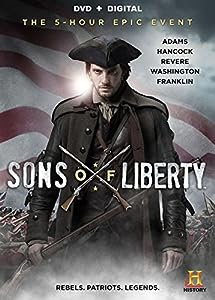 History, Henry Ford once said, is bunk.  I think that pretty much can sum up the former History Channel's programming (a network trying so hard to be 'hip' it now goes by just "History").  Tiring of endless Nazi-related documentaries (let's face it, thanks to the History Channel, I've spent more nights with Hitler than Eva Braun), they opted for original programming.

Vikings, their big breakout television series (or as I like to think of it, their effort to cash in on Game of Thrones sex and violence with a veneer of history), at least has the benefit of being completely original (as in, it is fictional save for the fact that Vikings did exist).  They also have invested heavily in reality shows that have a relationship with history (sometimes tenuously so).

Pawn Stars and American Pickers touch on actual history via the objects they examine. Now, I love American Pickers myself (Mike Wolfe is fast becoming a personal hero) and his and Frank Fritz's love for the past is obvious.  However, I have yet to understand the truly educational aspects to Counting Cars or Swamp People, let alone how it serves in educating people about 'history'.

I won't even touch Ancient Aliens...

Now we come to Sons of Liberty, History's second foray into original programming that is based on real-life historic figures (after Hatfields & McCoys). Figuring that some of the Founding Fathers were too dry for our Millennials, the good folks at History decided they needed to be 'sexed up', making them action stars rather than dull intellectuals insisting they had a right to their own lives from a tyrannical regime.

I confess to being excited for Sons of Liberty when I first saw the trailers, being a fan of history myself.  After a few minutes I switched off the miniseries once I saw Sam Adams leaping about the Boston rooftops and being all scruffy anti-hero like some sort of Colonial Spider-Man.  During an Independence Day marathon, I saw more of Sons of Liberty, but not the whole thing.  With that, I opted to watch all five hours of it.

This is what I can say about Sons of Liberty that would be positive.  It has some great performances and good action.  However, I have never seen a network that claims to be ABOUT history try so hard to create an alternate history.  In truth, while at times entertaining, any connection between Sons of Liberty and actual history is purely coincidental. 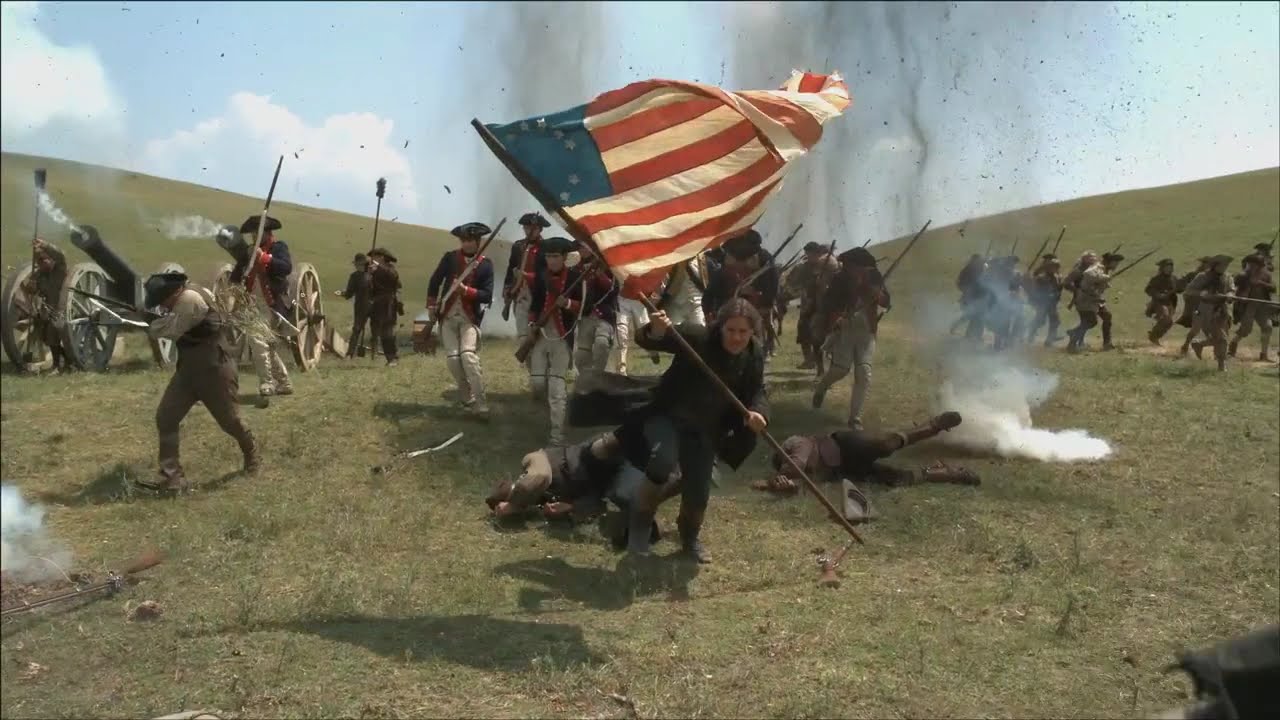 In the three episodes: A Dangerous Game, The Uprising, and Independence, we get to know our leads.  Sam Adams (Ben Barnes) is a scruffy ne'er-do-well, barely one step ahead of the law.  A bit of a rabble-rouser and hothead, he is the antithesis of his cousin, John Adams (Henry Thomas), a dispassionate lawyer who is constantly worried about something, be it Cousin Sam or something else.

The British governor of Massachusetts Colony is finding Sam Adams an irritant, so he turns to foppish businessman John Hancock (Rafe Spall) to see if he can use his considerable influence to get Sam and his gang under control (that whole 'storming of the Governor's Mansion' thing not exactly helpful).  The dandy Hancock and the ruffian Adams strike a deal: in return for Hancock paying all of Adams' debts (including those of the people Adams, as a royal tax collector, never bothered or wanted to collect), Adams would keep the mob under control.  The Governor is, oddly, furious at this and decides to strike back at Hancock by cutting the sweetheart deal the Hancock family had (lower to no import taxes).

A stunned Hancock then goes to Sam Adams for help, and it's agreed that they will get into smuggling: Hancock gets the cash, Adams gets to undercut anti-Loyalist businesses.  However, the thing eventually gets exposed and a child is killed.  The growing crisis grows to both the Boston Massacre and Boston Tea Party.

So enraged are the British at these hijinks that they send General Thomas Gage (Marton Csokas) to quell these obnoxious colonials who don't know their place.  He brings his very luscious American-born wife Margaret (Emily Berrington).  She is not keen on her husband, but someone DOES catch her eye.  It's hunky Patriot Dr. John Warren (Ryan Eggold).  Soon, they begin a passionate affair, and she even helps the Rebellion by sending advance notice of Gage's march to Lexington and Concord to arrest Sam Adams and Hancock, with Paul Revere (Michael Raymond-James) leading the race.

Sons of Liberty has some fine performances but in terms of actual history, it is so wildly out-of-touch that the Founding Fathers would sue for libel if they could see what they've done to their reputations.  Let's concentrate on the first aspect to start with.

In terms of actual acting performances, the clear winner is Spall as John Hancock.  He makes Hancock into this dandy essentially dragged into revolution due to his own financial interests.  Despite the perhaps unsavory aspect to that, the idea that it was less a call for liberty but a call to keep up his lavish lifestyle that motivated this Founding Father, Spall's Hancock is almost endearing in his constant hesitancy.  His foppish nature and slightly bumbling manner are a standout, and if not the comic relief at least a little bit of lightness to the more gruff and hard-core action Patriots.

It's at times almost hilarious when we see the dandy Hancock and the ruffian Sam Adams working together.  While not intentional, the Odd Couple theme popped into my head when they were forced to live together before the 'shot heard 'round the world'.  I don't think it was meant to be comical, my mind couldn't help wander into what a sitcom starring Sam & John would look like.

Csokas was in need of a mustache to twirl as the almost cartoonishly villainous General Gage, so fully aware of his wife's infidelity that he almost uses Bunker Hill as a way to get rid of his love rival.

I feel for Thomas, who as John Adams really had little to do but worry about something or other.  It's clear that in Sons of Liberty the flashier (and hotter) Adams was the main draw.  This miniseries is probably Ben Barnes' best performance...insofar as it is Ben Barnes' ONLY decent one.  He was all gruff-and-guts and willing to fight (which apparently none of the others were).  His Samuel Adams was an ACTION star, a brooding soul with a permanent stubble.  Who knew?

Perhaps that is ONE of the many reasons Sons of Liberty fails.  It has little to no interest in actual history, for if we go by this series, Ben Franklin was too busy getting it on with 'women of ill repute' to bother with such things as creating free libraries or scientific study.

That little thing about John Adams defending the British soldiers in the Boston Massacre?  SO unimportant it need not be mentioned or covered.

Oh, yes, the whole Boston Tea Party being some sort of Gangs of Boston spectacular to where one starts looking for Bill the Butcher?  Well, it makes for better drama.  Why were the colonials getting their knickerbockers in a twist about the tea onboard some ships?  Do we REALLY have to bother with pesky details when we've got a fight scene to think of?

Worse, it fails to even hit on things that would rationalize the drive for independence.  It may be one thing to never mention the Committees of Correspondence, but it is another to never mention how things began to grow so out-of-hand.  How can any miniseries about the American Revolution fail to mention that the Stamp Act or Tea Act or Intolerable Acts were driving the wedge between Crown and Colony?  As far as I can make out from the miniseries, the American Revolution was brought about by street gangs looking for a fight and a bunch of smugglers who didn't want to pay taxes. It's as if the people behind Sons of Liberty thought the whole enterprise was more about creating a believable video game than about dramatizing history.  Now, I'm not such a historic purist that I need EVERY little detail correct (having a little sexy-time between Mrs. Gage and Dr. Warren doesn't horrify me...much), but taking these men of intellect and turning them into beer-swilling hoods save for the persnickety Hancock (there are an awful lot of pubs in Boston apparently) looks downright deceitful, as if Sons of Liberty didn't trust its audience to both educate and entertain.

Worse was Sons of Liberty's decision to be rather graphic with the violence.  At the Battle of Bunker Hill we saw a revolutionary's head literally blown off with a cannonball, which jolts the viewer into some shock.  I seriously wonder whether Sons of Liberty went too far in the gamification of the early days of the American Revolution.

It decided it made for better television if they were The Founding Bros than Founding Fathers. In the words of Young Mr. Grace, History expect the whole thing would be too boring.  Therefore, a lot of action is to be had.

Of course, the series does have other recompenses. The actual action and battle scenes are well-crafted and move well (though I sometimes would have pulled back on the slow-motion).  The scene where Hancock takes a pistol to save Revere and Sam Adams is beautifully shot.

Sadly though, these are few and far between.  For those who care and love history, Sons of Liberty plays close to parody.  It will be liked by those who like action, don't question or care about historic accuracy, and maybe elicit some sense of patriotism.  I can't fault it for that.  I CAN fault it for not trusting history to be exciting, or to take these truly dramatic moments and highly intelligent figures and reduce them to so many tropes.

Ultimately, Sons of Liberty plays like a particularly sauced-up episode of Drunk History, with one difference.