Gotham: This Ball of Mud and Meanness Review 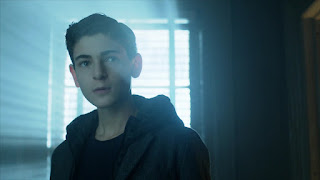 GOTHAM: THIS BALL OF
MUD AND MEANNESS

Gotham has been criticized, fairly I think, for sometimes forgetting all about Bruce.  The future Batman at times seems to be missing from a show that will ultimately lead to Batman's rise (which I understand will be the final shot of the last episode, whenever that will be).  This Ball of Mud and Meanness is primarily a Bruce Wayne-centered story, and I think gives us a wonderful 'what-if' scenario, as in 'what if Gotham were more about Bruce than about the future Commissioner Gordon?' Up to a point, I can see why Gotham went the way it did: shows were pre-teens are committing violent crimes isn't going to be a huge draw, and in fairness the show's versions of Penguin and Riddler are fantastic.

However, with This Ball of Mud and Meanness, we got a little bit of an idea of what a show focused around Bruce's journey would have been, and moreover, a chance for the young actor playing Bruce Wayne to show why he is doing a simply fantastic job as Young Master Bruce.

Having knowledge of his parents' killer, Bruce Wayne (David Mazouz) decides he and his valet Alfred Pennyworth (Sean Pertwee) will go search for Matches Malone (Michael Bowen).  Alfred, however, is unaware that Bruce has decided he, not Alfred, will kill Matches, going so far as to get a gun from his frenemy Selina Kyle (Camren Bicondova).  Alfred has to literally fight to get Matches' info from another criminal nicknamed 'Cupcake' (Jamar Greene), and while he's recuperating Bruce decides to go on his own.  This so alarms him he calls on Detectives James Gordon (Ben McKenzie) and Harvey Bullock (Donal Logue) to find him.

Bruce finds his way to a punk club where the actions of The Maniax are celebrated in song and video.  Here, he sees Jeri (Lori Petty), the punk rock singer who wears make-up not unlike the future Joker and who knows Matches' exact address.  She is impressed with Bruce's manner and eventually gives him the address.  Gordon gets to Bruce and attempts to stop him, but Jeri belts out a song that causes the club-goers to grab Gordon.

Eventually, Bruce finds Matches and finds not the monster of his visions, but a man who kills for money.  Bruce cannot bring himself to kill, which enrages Matches.  Bruce leaves the gun and leaves, and when Gordon gets there both hear a gunshot from Matches' apartment.  He has killed himself, and Bruce leaves a note for Alfred saying he's going to live on the streets with Selina for a time, to see how the other side lives and see if he can start combating the darkness by going into it.

In the other subplots, poor Oswald Cobblepot (Robin Lord Taylor) is still being 'treated' by Dr. Hugo Strange (B.D. Wong) in an effort to make him more docile.  This includes a rather horrifying dream where one Oswald beats on Oswald's beloved mother Gertrude Kapelput (Carol Kane).  Eventually, Oswald is so docile and sweet that he is declared sane and released from Arkham Asylum, though Dr. Strange's plans go deeper for our waddling villain.

Back at the GCPD, forensics officer Edward Nygma (Cory Michael Smith) is becoming both concerned and irritated that Gordon is beginning to look into the disappearance of Ed's former girlfriend Kristen Kringle.  A mixture of fear and loathing come into Nygma's mind regarding "Jimbo", and he starts thinking of ways to outwit his frenemy.

It looks like Gotham has taken a massive leap with This Ball of Mud and Meanness, and the primary reason for that is David Mazouz's turn as Bruce Wayne.  Sometimes Mazouz doesn't appear on Gotham at all, but no one can complain that Bruce was left off this week.  In fact, this episode was built around him, and Mazouz gives a simply brilliant performance.  Far gone is the insecure little boy who lost his parents.  Instead, we get a young man who is conflicted: angry and vengeful, but also moral and determined to do good in a world that has become much darker.  Mazouz is so good in mixing Bruce's hesitancy with genuine fear, making Bruce's journey into the dark knight of his soul into one of almost redemption.

For so long Bruce has been haunted by being unable to stop his parents' killing, and now, in his search to find and bring vengeance on he that destroyed his ideal life, he finds that he can go only to the edge of the cliff but will not jump off it.  His final voice-over monologue is both a brilliant piece of writing and brilliant piece of acting. "You can't kill murder.  You can't get revenge on evil.  You can only begin to fight such things by not doing them".  Here we hear the future Batman's creed, and we see the evolution of Bruce Wayne into becoming that Dark Knight.  Now, we CAN believe that this Bruce Wayne WILL become Batman.  This has to be David Mazouz's finest performance on Gotham.

Equally excellent is guest star Lori Petty as Jeri.  Jeri was obviously meant to evoke whatever version of The Joker that will emerge from Gotham, but she created a whole new persona devoid from the makeup.  Jeri embodied the worship of the dark side of man, her and the club's love for the murderous evil Jerome and the Maniax committed on full display with the songs they sing and the video of the GCPD massacre playing in the background.  Jeri mocks the upright but almost bullying Gordon and Petty makes the character seem believable in this crazy, dark world.  I'd have no problem having her return for another appearance.

I think Gotham is really one of the best-acted shows, with CMS making Nygma more menacing and the evolution of the future Riddler again, believable.  He even gets a slight crack at McKenzie's expense, referring to Gordon as "my little man" (denoting McKenzie's 5'8" stature to CMS' 6' 1/2".  The fact that I'm 5'8" myself should not discourage me either).

Though his role was smaller than usual, we feel such empathy for RLT's Oswald, who seems almost like a lost little boy in the torment of Strange's wicked experiments.  That delight when he is given his papers declaring him sane is so endearing, though I question why The Penguin didn't get his umbrella when he walks out of Arkham in the rain.

Everyone got their moment, and we even got an anti-gun speech by Selina.  "Guns aren't for show, Bruce.  And they're not for protection.  They're for one thing," she tells Bruce when she gives him the gun.  We know what they are for: killing.  The question is whether Bruce will be able to kill.

I would be remiss if I didn't mention Wong's cold take on Hugh Strange.  It's really a sharp performance, one that displays so much by the eerie calm he demonstrates throughout.  We know he's a villain by just how rational he is.  Matched he is by Tonya Pinkins' Mrs. Peabody, as cold an assistant in evil as we've seen.

As a side note, does anyone ever ask her where Sherman is?

This Ball of Mud and Meanness is the best-acted Gotham so far, and one that delves into the darkness that Bruce Wayne will encounter before emerging as The Dark Knight.  The fact that this was not a violent episode (Matches' suicide is remarkably restrained by Gotham standards) adds to my enjoyment.

By far, Gotham is knocking it out of the park, and we now see how Young Master Bruce will eventually take on the cowl that is his destiny.

Next Episode: Mad Grey Dawn
Posted by Rick at 2:27 PM