Bates Motel: A Danger To Himself And to Others Review

BATES MOTEL: A DANGER TO HIMSELF AND TO OTHERS

And what would life be without a little Bates Motel sheer craziness?  A Danger To Himself And to Others, Season Four's premiere episode, goes again for the bonkers to where it makes the goings-on in Gotham seem downright Ozzie and Harriet-like.  We had two things that Bates Motel now has as a set standard: parallel stories and Norman Bates being looney.

It's interesting that Gotham came to mind, as we start with Norman Bates (Freddie Highmore) missing.  He's out in the woods, arguing to an imaginary version of Mother when a concerned man comes across him in a field.  So agitated is he that he has to be punched and tied up at the county hospital (which looks like Gotham General...all yellow lights and dark corners).  Meanwhile, Emma Decody (Olivia Cooke) is in Portland, getting ready for her lung transplant.  Her new boyfriend/Norman Bates' brother Dylan (Max Thieriot) is torn, but once Norman is found he goes to Emma with the blessings of his mother, Norma Bates (Vera Farmiga).

Norma seems to realize that Norman does need total care, but the posh mental hospital is still out of reach.  Part of her mad scheme is to try to get Sheriff Romero (Nestor Carbonell) to marry her to get insurance.  Romero, already torn with guilt over his killing of Bob Paris, just does not want to deal with this admittedly attractive but dangerous woman (just ask poor Professor Finnegan).  Well, eventually Norman is released but when he tells his mother about his dream of "Mother" killing Bradley by bashing her head in, Norma sees that perhaps his 'dream' is really an unconscious confession.

As if all that wasn't bad enough, we have the appearance of Audrey Ellis (Karina Logue), Emma's long-lost mother.  She wants to reconnect with her daughter, but Emma's father is dead-set against it.  Norma isn't too keen on the idea either, but when Norma's away Audrey goes back to the Bates home to plead her case again.  This time, she meets Norman, who unbeknown to her is in full Mother mode, having another breakdown when she leaves him and locks him in.  As 'Mother' but looking like Norman (except for Norma's bathrobe and feminine behavior), he/she appears sympathetic...only to end up strangling her in a fit of rage about how bad a mother Audrey is. 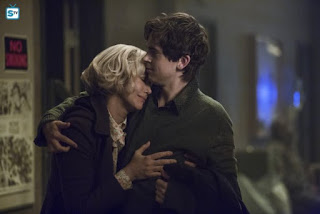 Again, let me draw attention to the parallels in A Danger to Himself And to Others.  There's the parallel of the hospital.  Emma is in a lovely facility with excellent care.  Norman is in a virtual hellhole: dank and dark, with thoroughly uninterested staff.  Emma is recovering and appears to be on the road to being whole.  Norman is breaking further apart into being a completely split personality.

There's also the parallel stories of mothers.  Norma Bates has been a hovering, excessively protective and caring but misguided mother.  Audrey Ellis has been an absent mother, one who was not there.  Both however, are in many ways similar.  They both have ill children whom they want to help but neither is able to: Audrey with her long absence, Norma with her long codependency (seriously, neither Norma or Norman appear to question the logic of them sharing the same bed when he's already 18 and a legal adult).  Emma knows nothing of her mother's reappearance, while Norman cannot and will not shake away from.  It is parallel lives, and again it is one of the things Bates Motel excels at: bringing two seemingly different stories together into one ball of crazy.

In terms of performance I don't think we really could get better than the always brilliant Farmiga.  In four seasons I have yet to find a terrible performance from her.  Norma Bates is not a villain or a monster, but a deeply flawed woman, yearning to do the right thing but still struggling with what it means to her.  Norma in some level must know that her son has essentially confessed to another murder, but she continues to enable him, not with covering up, but by attempting to shield him.

I also wonder why she didn't simply leave a note for Norman when she left, thinking that if she had reassured him in some way he wouldn't have had a psychotic break that lead to cross-dressing and murderous hijinks.

Highmore needs to get more credit than he deserves as Norman Bates.  He still balances making Norman sympathetic on some level while completely bonkers on another.  You feel for him as he is bound to a stretcher in the county hospital hallway, but are horrified at his strangling of Audrey.

In a certain sense, I think the rest of the cast had very little to do.  Carbonell looked appropriately exhausted from his own dark night of the soul, but he did nothing.  Same for Thieriot's Dylan, and especially Cooke's Emma (though with her lung transplant, perhaps now she won't be carrying the oxygen tank that has become her trademark).  Again, it is the premiere episode.

Honestly, I've pretty much lost count of the people Norman's killed: there's the luscious Miss Watson, Bradley, his own father, and Cody's father (though to be fair, that last one was an accident), and now Audrey.  That's FOUR people Norman has killed.  On some level, Norma must know that Norman IS A Danger to Himself and to Others... 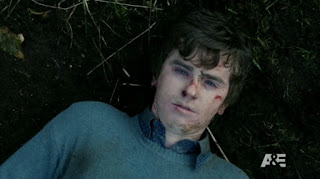 Next Episode: Goodnight, Mother
Posted by Rick at 1:11 AM