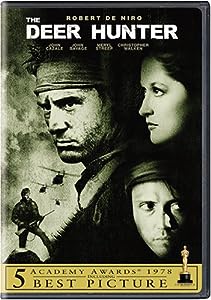 I imagine there were more than a few unfortunate souls who went to The Deer Hunter as a date movie.  If they did, they probably didn't end up marrying (unlike the long wedding scene in the film).  The Deer Hunter is a sad, tragic tale of how the Vietnam War destroyed the lives of three friends, some physically, some emotionally, and some both.  Coming at a time when America was still struggling with the war's legacy, The Deer Hunter does not go into the politics of the war.  Instead, it delves into the impact of the war on the individual.  Despite the debunking of the "Russian roulette", one still leaves The Deer Hunter emotionally wrecked.

In rural Pennsylvania, three Russian-American friends celebrate one of them having a lavish wedding before going to Vietnam.  Steve (John Savage) marries Angela (Rutanya Alda) in an epic Russian Orthodox wedding and lavish reception just before he and two of his closest friends, Michael Vronsky (Robert DeNiro) and Nick (Christopher Walken) head off to one last hunting trip before going to serve in Vietnam.  Ominous signs appear when a veteran who is drinking in the VFW bar curses the war, and when a drop of wine falls on Angela's wedding dress unnoticed.  Mike however, does notice the lovely Linda (Meryl Streep), who is Nick's girl.

After the wedding, one last hunting trip where Mike shows his philosophy of 'one shot' to take the deer down.  Then it's quick to Vietnam, where the three friends are tortured by the Viet Cong.  Among the sadistic routines is when they are forced to play Russian roulette, where a gun with a single bullet is placed in the chamber and they spin the chamber around.  Once it stops, the one holding the gun is forced to put up against his head and pull the trigger.  Eventually, Mike manages to use the weapon to kill their captors, and he helps Nick and Steve escape.  However, all the men are broken somehow.  Steve is broken physically, his legs so broken that when Mike finds U.S. troops, they are forced to load him in front of the jeep like a deer.  Nick, who managed to get to the helicopter, is in a hospital in Saigon, but his mind is so broken that after his release he wanders the South Vietnam underworld, playing Russian roulette for cash.

Mike returns to his old home, but he is too damaged.  He and Linda grow close, but Mike keeps searching for Steve.  Angela is practically catatonic, but does give him some clue about Steve.  He is in a hospital, literally half the man he used to be.  Steve has been receiving money from Vietnam but doesn't know from whom.  Mike deduces it's from Nick, still lost in Saigon.  He goes there just when the capital is about to fall and finds Nick, who is completely gone.  Mike does reach his lost mind for one instant before Nick plays one last round of Russian roulette.

With Nick gone, Steve brings him back home for burial, and at their old hangout, the survivors toast Nick's memory and sing God Bless America.

It really is up to the audience whether God Bless America was meant to be ironic, bitter, or sincere.  I suppose each of the characters meant it in a different way, which is part of The Deer Hunter's brilliance.  It does not take an overt pro or anti-Vietnam War stand (though if I were asked, it is in the anti camp).  It really focuses instead on how the war itself took our characters, regular men, and wrecked them and the worldview they had.  None of them will ever be the same, and the lives lost (and the innocence lost) is what The Deer Hunter is about.

Let me take a moment to address the wedding sequence, which I figure takes up at least the first hour of this three-hour film.  Director Michael Cimino received massive critical backlash for being indulgent in this follow-up film, Heaven's Gate, but I wonder why critics went after him when The Deer Hunter showed how indulgent he could be with just one scene.  Those who have not seen The Deer Hunter but have heard of this epic wedding sequence should be prepared to wonder whether parts of it could simply not have been cut.  The entire thing does give us background into the various lives of this close-knit group, but it does start to drain the audience before we get to the really brutal scenes.

Cimino uses foreshadowing and symbolism overtly to where one wonders whether subtlety was something he cared about.  The wine (aka blood) dropping on Angela's wedding dress without anyone seeing it (though I imagine she was have seen it afterwards), putting Steve on top of the jeep in the same way Mike put the deer on the hood (symbolizing how Steve is now essentially a carcass), it's all so clear that again, I wonder whether less would have been more.  Just as Mike goes hunting, he too is hunted and haunted by all that he's seen.

This overt use of symbolism does not take away from the film.  I can't say it enhances it too much, but it also does not work against it.  It also does not take away from the performances, which really are universally brilliant.  DeNiro gives one of his greatest performances as Mike: this average, working-class man, loyal to his friends, slowly torn apart by his experiences but still holding on to some version of himself.  What makes DeNiro so perfect in the role is how relatable he is, how he shows Mike to be just like us.  It's his average-Joe nature that makes his story so real.  He could be us.  I think with Mike he doesn't see himself as a hero or his actions as either heroic or villainous (let's not forget, there were returning veterans who were spat on or cursed as 'baby killers' by anti-war advocates).  Instead, Mike is just a man who loves his friends, loves hunting, and comes to terms with how he cannot save those he loves.

Walken too is fantastic as the gentle Nick, who for him the war was not something of honor and courage but was the death blow to his soul.  His lost nature breaks your heart, how dead he is inside with the Russian roulette the only thing he now knows.  You silently plead for him to go back with Mike but know that perhaps if he did, his fate would still break him.

Streep, even in this early role, showed us why she is one of the greatest actresses of all time.  Linda is a good woman, loving, caring, but also torn between her love for Nick and the comfort of Mike, between the memory of a lost man and the presence of a live one.

Sadly, her then-companion John Cazale, who plays one of Mike's friends who doesn't go to Nam, was dying of lung cancer at the time The Deer Hunter was being made.  To accommodate him, all the scenes involving him were shot first; Cazale died before the film's release.

I think The Deer Hunter is a good film, a moving story of men who endured war, some who survived it, some who did not.  Is it an anti-war film?  I'm not sold on that idea.  I think it's more about survival and the price of friendship, of bonds between brothers: in war and in peace.  It is a very long film (the wedding scene itself I think went on far too long) and perhaps the worst date movie of all time.  However, in terms of acting (particularly by Walken, Streep, and DeNiro), and as a story of how we judge what a man is, The Deer Hunter is a good, strong choice.