Before Woody Allen became notorious for his private life, culminating in a scandal that shocked even blasé New Yorkers, he was seen as this brilliant comedic genius.  Annie Hall is a love story about two very different people, who meet, fall in love, and fall out of love.  After watching it, I thought it clever, sometimes amusing, but not this great comedy I was led to believe it was.  Then again, I've never been particularly amused by The Woodman, finding him a bit of an acquired taste.

In a non-linear story structure, we see the relationship between Jewish writer Alvy Singer (Allen) and WASP actress/singer Annie Hall (Diane Keaton).  Alvy is a neurotic Borsch Belt comic, one who finds sex has burdens and with two failed marriages.  Hall doesn't have all the hang-ups Alvy has, a bit of a free spirit.  They meet while playing tennis with mutual friends, and they begin a romantic relationship.  Things don't go smoothly: her family (particularly her grandmother, whom to Alvy's amusement she refers to as Grammy Hall) look on him as this odd figure, and their differences eventually lead to a break-up.  Alvy wants to understand why his relationship with Annie failed, and he delves into his past to try and work things out.

There is a reconciliation but still things don't work out for our pair. She finds romance with record producer Tony Lacey (Paul Simon...yes, THAT Paul Simon), and while he sees other women, he is still neurotic about it all.  Eventually, he accepts that 'love fades' and is if not happy (as he can never be happy) at least at peace with the rise and fall of his romance with Annie Hall.

Annie Hall is the type of film people talk about to death.  Let me try to explain that.  The film has earned a reputation as being this unimpeachably brilliant film, one that is hilarious, touching, intellectual, and above all else, perfect.  Perhaps all the build up around Annie Hall will inevitably lead some people to find it a bit of a letdown.  I don't think many films can survive this type of reputation, making them a bit remote to people.  Casablanca and Citizen Kane are good examples: how many have not touched them BECAUSE of their reputations as 'the greatest films ever made'?

When I went into Annie Hall, perhaps this idea that this was THE love story of ALL love stories made me think it was going to be hilarious.  It was funny, with certain moments that are extremely clever and insightful.  The sequence where an adult Alvy is in a room with his elementary school classmates as children with them describing how wrecked their future lives became is intelligent and sadly true-to-life, a mixing of innocence and despair that works very well.

A particularly great moment is when Alvy and Annie are on her rooftop garden.  Ostensibly a conversation about her photographs, the 'translations' that appear on-screen give what they are really saying: their flirting with each other.  This is such a true moment because it is a real moment, one that people can relate to and understand.  It's exaggerated for comic effect, but it is true: people do flirt by saying one thing when the subtext is another.

The moment when Alvy, Annie, and their mutual friend Rob (Tony Roberts) end up in Alvy's past is also quite clever and inventive, as is the dual therapy sessions of Annie and Alvy as they discuss with their respective therapists their different views on the same subjects. 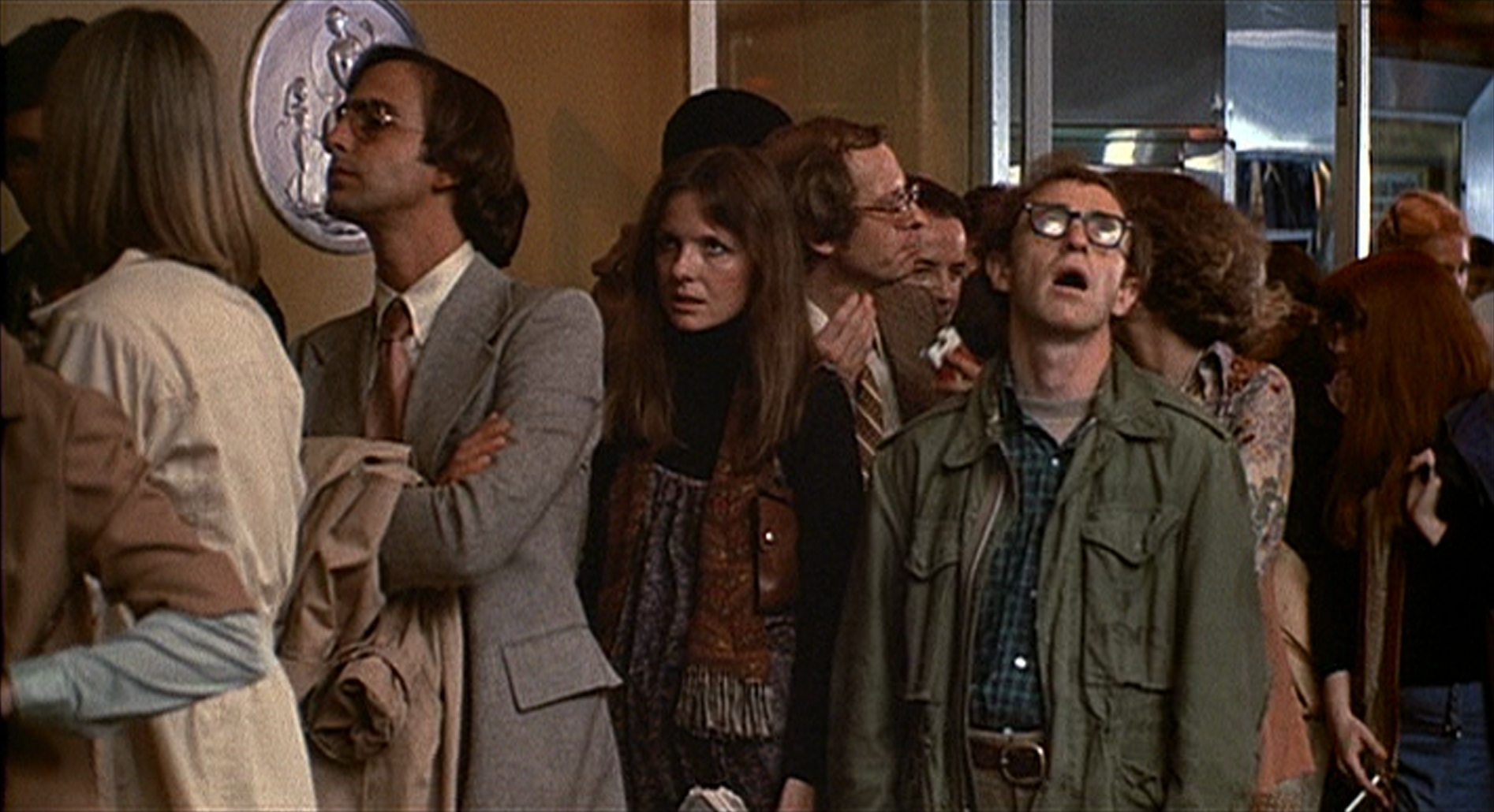 However, some things in the course of almost forty years do date the film.  As Alvy and Annie stand in line for a Fellini or Ingmar Bergman movie if memory serves correct, Alvy gets extremely irritated by the person behind him, attempting to tell his companion what is wrong with the director in pseudo-intellectual terms.

As a side note, you can't imagine HOW many times I've endured such a scenario myself.

Allen breaks the fourth wall to address us directly, kvetching about how moronic this man is, culminating with him pulling intellectual Marshall McLuhan from almost out of thin air to lecture the man about how wrong he was on just about every level.

Two or three things about this.  First, who is Marshall McLuhan?  That's a bit of a rhetorical question, in that perhaps McLuhan may have been a wildly popular figure in the 1970s and among a certain circle of people, but let's face it: he isn't exactly a big name among the hoi polloi that Allen has barely a nodding acquaintance of.  Second, something about this particular scene struck me as terribly smug and self-satisfying.  Sure, the man behind Alvy may be a moron, but was it really Alvy's burden to put him in his place and show him what a doofus Alvy knew him to be?  I know that when people attempt to sound intellectual within my earshot I tend to either make caustic remarks to my own companions only or simply keep those views to myself.  I can't remember a moment when I told someone how dumb they were about a particular topic...unless I was asked.  Third, while it's a clever scene I did wonder how it connected to Alvy and Annie's relationship.  Fourth and finally, it does have the negative effect of dating the film, and with the passage of time one I think would watch this and wonder not so much what is going on but why we should take McLuhan's word for it.

I will say that Keaton is entirely winning as the title character, a mixture of ditzy and endearing in her joys and own particular hang-ups.  She's so good in the film where we can find ourselves falling in love with her too.  Charming, sweet, but true to herself, her Annie is a delight.  It's hard to judge Allen's performance given that when he is in front of the camera he usually is the same nebbish, neurotic character almost to where there appears to be no difference between Alvy the character and Allen the real person.  Come to think of it, I can't recall the last film of his I saw where he was the main character.  I'm sure there are differences between the on-screen and off-screen Allen (I don't think he's a nebbish at all), but given he's done that shtick for so long I can see why Annie Hall is seen as autobiographical.

I figure it is partially autobiographical (a lot of his films I think are), but I wouldn't read Annie Hall as completely true-to-life.

In a certain way, I did like Annie Hall: the steady handling of one love story in a low-key and realistic manner, with memories flowing in and out.  I'll be frank: I prefer Love & Death and Sleeper over Annie Hall.  I think those two are funnier.  However, I wonder whether Annie Hall was meant to be hilarious (and as a side note, the voice-over here wasn't a big deal-breaker for me as it is for most other films).  It wasn't a spoof like the other two.  It was a love story and a good one.  It not a film I would necessarily go back to but not I will reject either.  Perhaps if it hadn't been so built up I would have appreciated it more.  As it is, Annie Hall is a good film, a bit dated now perhaps, a trifle too intellectual for some I imagine, but on the whole, not a bad time.  Maybe it even Seems Like Old Times...