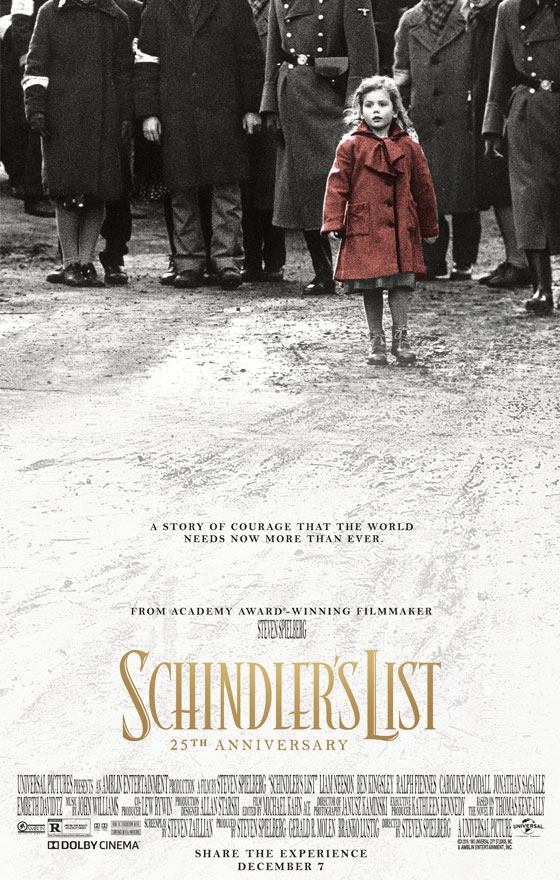 There are probably fewer film subjects both difficult and in a way routine as the Holocaust. No narrative film, however well-crafted, can truly capture the horror, the evil of the Shoah. Even documentaries such as Night and Fog or Shoah can fully document the monstrosity of this most horrific barbarism. Schindler's List, the story of how one man saved over a thousand Jewish lives, comes as close as possible.

Oskar Schindler (Liam Neeson) is generally apolitical and interested only in making as large a fortune as possible while doing as little work as possible. Buying influence with Nazi officials in occupied Poland, he sees an opportunity to enrich himself, particularly with the plight of Krakow's Jewish population which has forced into a ghetto.

He surreptitiously gets Jewish financing and has account Itzhak Stern (Ben Kingsley) run his enamelware factory. Schindler also gets help from black marketer Poldek Pfefferberg (Jonathan Sagalle), another Jew. Things couldn't be better for Schindler: a life filled with mountains of money, free labor, booze and broads despite being married to Emilie (Caroline Goodall).

However, as the antisemitism takes on a more murderous form in the shape of Amon Goeth (Ralph Fiennes), a Nazi commandant fully committed to the Final Solution, Schindler starts slowly evolving from apathetic Nazi to determined savior of 'his' Jewish slave labor. Continuing the bribes, Schindler now is committed to keep those in his factory alive while keeping his dance with Goth going.

Through his efforts, over a thousand souls were spared.

Schindler's List is an intensely difficult film to see as it revolves around the worst act of man's capacity for evil against his fellow man. There are sequences that elicit powerful emotions within the viewer, and it would be all but impossible to not find oneself crying. For me it was the liquidation of the Krakow Ghetto, a set of horrors that chill when shown.

The entire sequence was brilliantly filmed. Director Steven Spielberg shot this in a jumbled and chaotic manner to underscore the madness of the liquidation. We jump from scenes within the ghetto of mass shootings and rounding up of people to Schindler's point-of-view above the ghetto. Here, as his newest mistress rides away we see that Oskar has focused on a little girl in a red coat, an innocent lost and unaware of just what satanic evil is taking place. It's at this moment when we see the slow change in him.

Unlike his mistress, he cannot turn away.

His evolution is complete when later on he sees the same girl, now dead, about to be incinerated. Schindler, by no means a good man, rallies to do the one good thing he is in position to: save lives.

As a side note, I held it together until the Liquidation, but it was when a little boy led Mrs. Dresner (Miri Fabian) and her daughter Danka (Anna Mucha), whom he seemed smitten with, to 'the good line'. To place such a monstrous burden on a child is beyond comprehension.

The Auschwitz sequence is terrifying, particularly because we the audience expect it to go one way only to have that upended. As the characters have already discussed what happens in other camps, they expect things to go a certain way too. As we go through this with them, we too are placed within the fear of agony and death. Even though they do live, we still get shown that for some, there was no way out.

We see Schindler's evolution in a brilliant performance from Neeson. He starts out as almost a wolf, calculating how to take his prey. As the film progresses, we see that he not a moral man if by moral we mean honest, fair and faithful. In certain ways he does not change: at one point he rescues Stern more out of necessity than altruism. However, bits and pieces of a genuinely moral man emerge in how Neeson plays Oskar. He maintains a perfectly straight face when presented with a one-armed old man at his factory, then anger at being put in what he sees as a dangerous position as some kind of savior. Once he learns that same old man had been shot, he echoes to the commanding officer Stern's words about that man being 'essential'.

In Neeson's performance, we see Oskar Schindler embrace his reluctance of morality without making him a saint. He is a deeply flawed figure but one who takes on his goodness at the end with almost a childish glee.

To counter him is Fiennes as the psychopathic Goeth, whose grasp on anything good is almost nonexistent. The only moment where one sees that there may actually be a soul is when he has a one-sided conversation with his Jewish maid Helen Hirsh (Embeth Davitz). Goeth seems to actually struggle with the idea that Helen is human, one he may be attracted to, only to end up reverting to his Nazi training. At one point in Steven Zaillian's adaptation of Thomas Keneally's novel Goeth says "I want to grow old with her" almost offhandedly when Schindler negotiates who will be on his list. It's subtle but an insight into Goeth's very diseased and conflicted mind.

Kingsley too was excellent as Stern, a man both scared and courageous in working as much within the system as he could to save those around him. Davitz's Helen Hirsh also gives a strong performance of a woman doing her best to survive a volatile man. 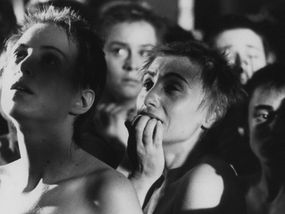 Schindler's List is also complimented by John Williams' haunting score, moving and elegant and tragic and uplifting, just like the film itself. Janusz Kaminski's black-and-white cinematography also works beautifully, more so when Spielberg uses a few bursts of color when candles are lit. The film opens and closes in color, taking us from a pre-Holocaust past to a post-Holocaust present. The candles still maintaining a brightness in the film are symbolic of the stubbornness of hope, light that will not be consumed by darkness.

Here perhaps I find my one major criticism on Schindler's List. It is at the end in the "I Could Have Saved More" scene. Having seen the film three times now I still cannot shake the belief that it was over-the-top: the acting, the scene, it all combined to if not completely take me out of a movie at least to remind me it was a movie. It does not take away from the power and importance of Schindler's List but it just felt as if they were gilding the lily.

However, minus that Schindler's List is more than an excellent film: well-crafted and well-acted. It is an important and necessary film, one that I wish were shown annually to truly keep to the slogan "Never Again".

Oskar Schindler was no saint and in many ways a failure and a fraud. Only once in his life did he demonstrate any morality, but would that we all have that ability at such an hour to demonstrate that kind of moral clarity.