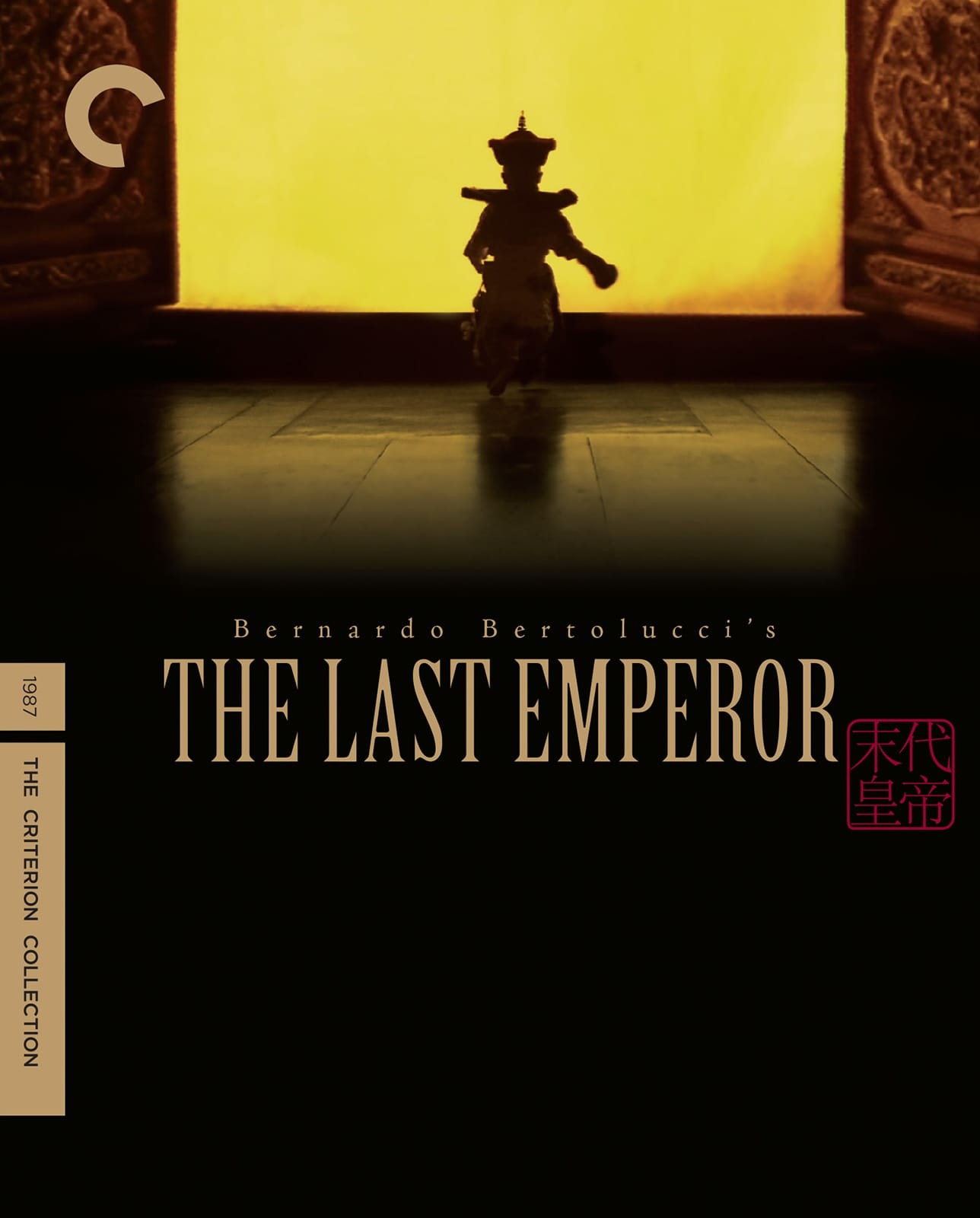 Pu Yi, the subject of the biopic The Last Emperor, is pretty much a pretty forgotten figure in history, a footnote in that vast expanse of Chinese civilization. His biopic too has suffered a similar fate: despite sweeping the Academy Awards by winning all nine of its nominations, few people remember it. That is a terrible shame, for The Last Emperor is more than a history lesson on an obscure figure, but a story of a man caught in history's maelstrom, majestic but powerless, forever doomed to be a puppet.

Manchuria 1950. A group of Chinese war criminals arrive to be imprisoned and/or reeducated by the Chinese Communists. Among them is Aisin-Gioro Pu Yi (John Lone). He, however, is no ordinary collaborator. He is the last emperor of the Qing Dynasty, still recognized by others. The Last Emperor goes back and forth between his imprisonment and interrogation by fierce The Interrogator (Ric Young) and the more moderate Prison Governor (Ying Ruocheng), as "Prisoner 981" remembers his life.

Peking 1908: little Pu Yi is snatched from his own palace and swept into the Forbidden City, where the three-year-old is placed on the throne. His every whim is catered save one: the desire to go home. His only real friend is his wet-nurse Ar Mo (Jade Go), though later he is joined by his younger brother Pu Chieh. A monarch in name only, he floats in an unreal world: lavish, elaborate but empty.

In comes a new tutor, Reginald Fleming Johnston or R.J. (Peter O'Toole), who brings a window into His Majesty's life. Despite this and a marriage to two women (an Empress and a Secondary Consort), Pu Yi's life is still summarized essentially to two phrases: "I do not understand" and "Open the door", the latter being the one command that is never granted.

Finally forced out of the Forbidden City in 1924, he is taken in by the Japanese in more ways than one. While his secondary consort Weng Hsui (Wu Jun Mai) leaves him, "Henry Pu Yi" and the Empress "Elizabeth" Wan Yung (Joan Chen) continue their dance with the Japanese, in particular with the mysterious Mr. Amakasu (Ryuishi Sakamoto). Wan Yung also falls under the spell of Pu Yi's cousin Eastern Jewel (Maggie Han), a spy and Japanese collaboratrix against her own Chinese people.

Pu Yi accepts the throne of the puppet state of Manchukuo but tragedy strikes all, in particular Wan Yung. Captured by the Russians, the former emperor is eventually sent back to the Chinese, where he takes the blame for everything, even things he was not involved in. Eventually, after 'rehabilitation', Pu Yi is released and lives as a gardener, where he dares to confront the Red Guards during the Cultural Revolution when he sees his former Prison Governor held for mockery.

Pu Yi makes one last visit to the Forbidden City, where he metaphorically disappears from history, dying in 1967. 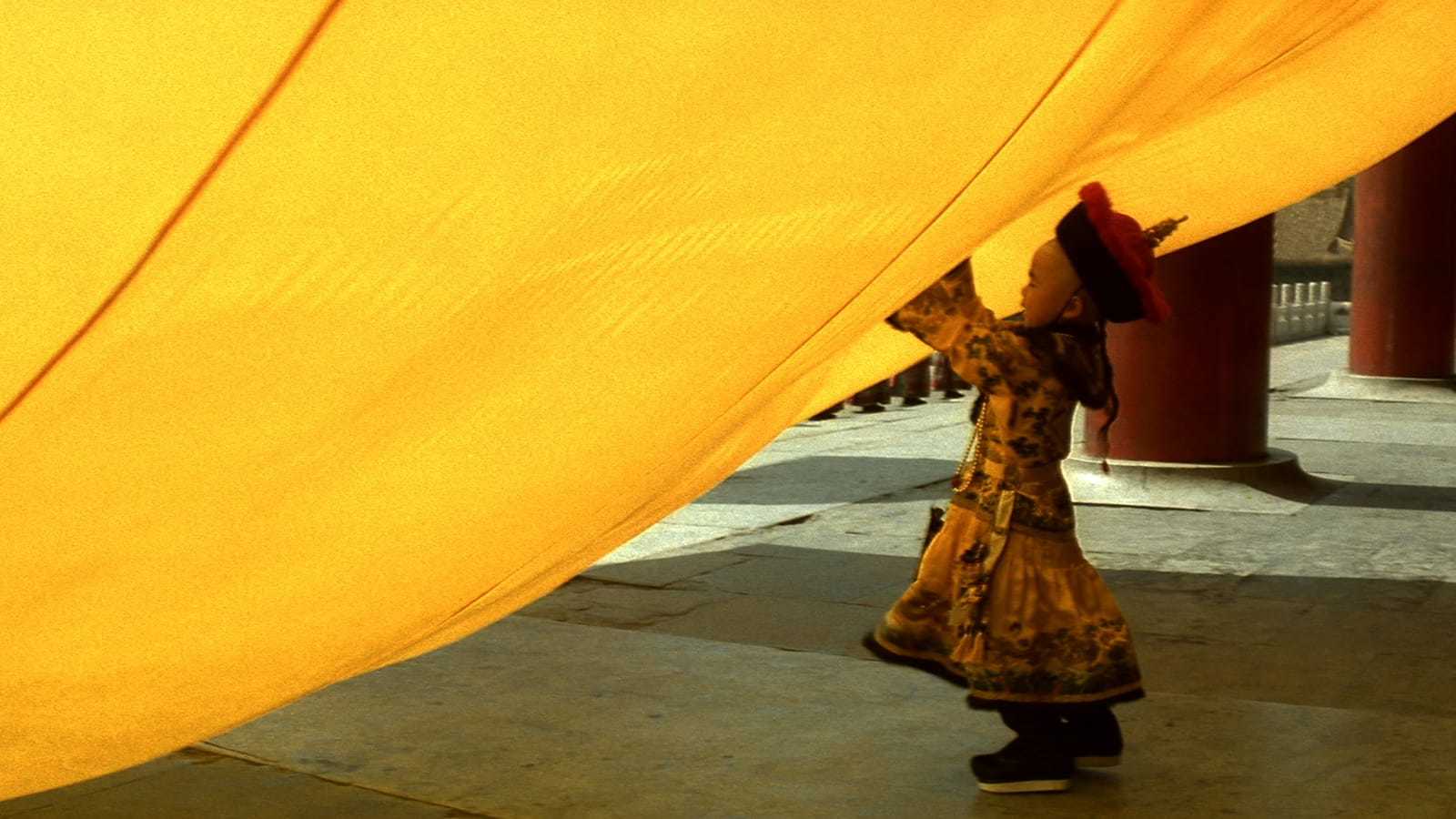 The Last Emperor has a very traditional but well-structured series of flashbacks and forwards, where one moment or question triggers a memory. As the film goes on, it never falters in either feeling long or in having the time shifts interrupt or collide. We flow from 1950 Manchuria to 1908 Peking so smoothly, and it's a credit to the editing that these events flow so well.

It's also a credit to screenwriters Mark Peploe and Bernardo Bertolucci (who also directed) that Pu Yi's life is chronicled in such a way that we can follow the story and even get hints about the themes in The Last Emperor. During his early childhood, Ar Mo tells Pu Yi a story that ends "and when the tree fell, the monkeys were scattered", foreshadowing how when he (the tree) fell, his court and in particular the army of eunuchs (the monkeys) were scattered. Later on, as he remembers when he expelled the eunuchs, he says, "The Forbidden City had become a theater without an audience, so why did the actors remain on the stage? It was only to steal the scenery piece by piece".

Pu Yi's entire life was a puppet theater where he was the puppet, never the master. Even the one time he tried to be the puppeteer with his collaboration he found himself directed by the villainous Mr. Amakasu and Eastern Jewel, the Empress' frenemy and opium supplier.

I would say the themes in The Last Emperor are those two repeated phrases: "I do not understand" and "Open the door". Pu Yi was perpetually caught in circumstances he did not or could not comprehend, from his enthronement to his inability to leave the Forbidden City after he abdicated to his eventual lack of comprehension about his true powerlessness. He was a very tragic figure, some of it not of his own making but some of his.

The powerlessness of those who seem all-powerful is captured in the repeated refrain of "open the door". Pu Yi demands this often but he is not obeyed either out of tradition or contempt. Moreover, the one time the request is granted it is in prison where he has no choice. If one thinks about it, Pu Yi was always in some kind of prison. 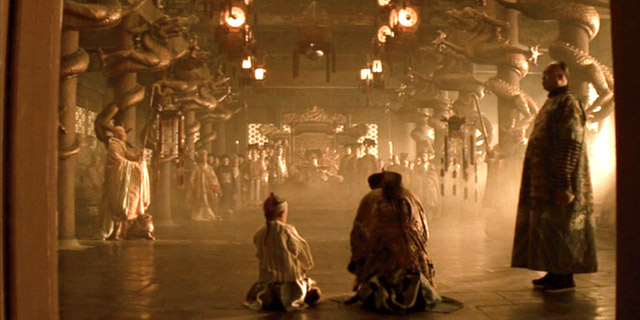 The Last Emperor showcases perhaps the best prison ever. It is the first Western film permitted to shoot inside the Forbidden City, and the film makes the most of the imperial palaces and grounds brilliantly captured by cinematographer Vittorio Storaro. It is if nothing else a lavish-looking film. Storaro not only enriches the vastness and lavishness of the Forbidden City, but bathes certain moments in breathtakingly beautiful colors. For example during his exile, we see the occupied city of Tiensin in amazing blue that reflects both the night and the mood of sadness.

We also see the lavish and opulence of the Qing court and retinue in James Acheson's costumes and the set designs that blend so well with the majesty and power of the Forbidden City. The opulence and tragedy of Pu Yi's life was also so beautifully captured in the score written by former Talking Heads frontman David Byrne, Chinese composer Cong Su and Sakamoto, who did double-duty as the villainous and mysterious Mr. Amakasu.

As one sees The Last Emperor, it is astonishing now to think that despite its nine Oscar nominations/wins not one nomination went to any of the actors. I am simply amazed that such great performances so well-directed by Bertolucci were passed over.

Lone is in turns arrogant and tragic as Pu Yi, a man driven and repelled by power, desirous to take control but incapable of it. Lone plays Pu Yi as a haunted man, one who yearns for freedom but is also terrified of it.

Chen was beautiful and tragic as Wan Yung, an innocent corrupted by those around her into becoming a sad, pathetic and tragic figure. Her final scene where she returns to the palace as Manchukuo is about to fall is heartbreaking: totally bereft of mind, knowing her child was assassinated right after birth and destroyed by drug addiction, she can only stare at her husband, half-knowing half-unaware.

Han as the villainous Eastern Jewel, Dennis Dun as the loyal but long-suffering valet Big Li, Victor Wong as the honest and Cassandra-like High Tutor, and Ruocheng as the wise Prison Governor were also worthy of consideration.

Also high on the list for consideration should have been Peter O'Toole as Mr. Johnston. In turns compassionate and angry, one who could speak truths to His Majesty while also in his own way coddling Pu Yi's vague dreams for imperial restoration, O'Toole more than held his own. He even brings a touch of comedy when he finds himself unable to answer why he never got married himself.

The Last Emperor is a sweeping epic of a most inconsequential historic figure. Pu Yi did not impact humanity in any tangible way. Instead, he was just a cog in the wheel of time, a figure trapped by the machinations of those around him.

He did not shape history. He was instead a victim of it.