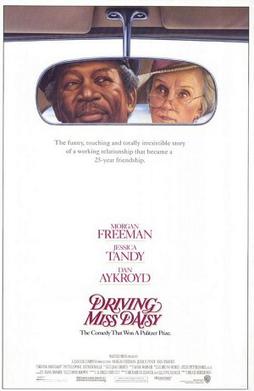 In the span of thirty years few Best Picture winners have proved so divisive as Driving Miss Daisy, though the controversy has little to nothing to do with the film on a technical level. Instead, it is the subject matter that causes so much ire, so much so that when Green Book won Best Picture the specter of Driving Miss Daisy came to haunt the latter. Both films revolve around chauffeurs and their paying passengers with only the races reversed and one pair being the same sex versus Miss Daisy's male-female perspective.

Looking back on Driving Miss Daisy, like the title character the film has aged poorly; however, one can find a surprising critique of concepts that had not been conceived of when the film charmed audiences: white privilege and liberal hypocrisy.

Wealthy white Jewish widow Daisy Werthan (Jessica Tandy) had a small incident with her car: she got confused on the gears and ended up backing the car into her neighbor's backyard. Her son Boolie (Dan Aykroyd) decides it's time she have a driver, but Miss Daisy will have none of it.

Boolie nevertheless hires black driver Hoke Colburn (Morgan Freeman) to 'drive Miss Daisy'. Daisy's hostility is overt until finally she breaks down and very reluctantly takes to being driven. Soon she finds Hoke almost as indispensable as her maid/cook Idella (Esther Rolle). Miss Daisy is able to vent her irritation at the WASP aspirations of her daughter-in-law Florine (Patti Lupone) and travel to Mobile for her brother's 90th birthday.

Over time their relationship evolves from hostility to amiability as the South changes from a segregated society to a more diverse and inclusive one, though not without a few bumps on the metaphorical and literal road between Hoke and Daisy. Eventually, as Miss Daisy slips into dementia and is put in a home, Hoke visits 'Miss Daisy' one last time.

My mother loves Driving Miss Daisy, or as she calls it in her mangled English, Driving My Daisy. Why she keeps calling it that I can't guess at, but in a certain sense Mom's right in referring to it as Driving My Daisy. The film centers around Miss Daisy and Hoke in their give-and-take, particularly her evolution from hostility over the loss of her independence to embracing change on her terms versus his own views about being a man, particularly a black man.

The film is certainly Jessica Tandy's show and bless her for making Miss Daisy remotely likable given how nasty she is, particularly in the beginning towards Hoke who has done nothing wrong. Every time he attempts to do something to justify his salary, Miss Daisy comes storming in harder than Sherman stormed into Atlanta.

Miss Daisy is rude, mean, obnoxious, cantankerous and dismissive. And that's just with her only child!

She's far worse with Hoke, but Tandy makes Miss Daisy also into someone who could also be soft, even hurt. In her performance, Tandy shows that Miss Daisy is not snobbish but instead someone who still considers herself the poor Jewish girl from the wrong side of the tracks versus the wealthy widow she is now.

Freeman more than holds his own as Hoke. It might appear that he is close to being a 'magical Negro', someone who is there to enlighten the white character. However, Freeman makes Hoke someone who knows the societal limitations he faces but also knows how far he can be pushed. We see this when he coolly informs Daisy that as he nears 70 he is not about to tolerate being told when he can and cannot urinate, least of all by a woman who does not have the legal limitations he has.

In what could be a surprising turn, Aykroyd does a fantastic job in the drama as the much put-upon Boolie. He genuinely loves his mother but finds her exasperating, something just about every single son understands. It's a curious thing that despite how good Aykroyd is in Driving Miss Daisy he has not been given as many dramatic roles as his talent merits. In their brief screen-time both Rolle and Lupone give strong performances as the wise Idella and the shrewish Florine respectively.

As I stated earlier, Driving Miss Daisy has not aged well, particularly when it comes to how race relations are portrayed. Alfred Uhry, adapting his own play, seems disinterested in emphasizing what should be Hoke's irritation at Miss Daisy's manner. It's a curious thing that Miss Daisy now comes across as either a dumb liberal or a hypocrite.

She says she's not prejudiced, and she may not be in terms of thinking she is superior to blacks. However, she also says that "they all take things" when she goes into a fit about Hoke  having taken a can of sardines. The film never stops to ask why she thinks "they" take things or who exactly "they" are: blacks in general, black men in particular or just Hoke. We can laugh at how Hoke not only admits to taking said can prior to it being brought up but also buying one to replace it, showing up Daisy. However, there is something distasteful about that "they all take things" line.

Moreover, at least twice we see that Miss Daisy is rather hypocritical in her manner. She is the type of person who can support change so long as said change does not affect or impact her personally. She may not be prejudiced, and is actually complimentary to Hoke as being 'the only real Christian' she knows versus Florine who pretends to be Christian to better integrate herself into the more dominant culture.

However, Miss Daisy never stops to consider that this man, whom she's grown to be fond of and who seems to genuinely like her for herself, should have the ability to urinate when he needs to. Instead, as she is desperate to get to her brother's in time, tells him flatly that he 'can hold it' for who knows how many miles. Her insensitive and brusque manner is surprising and surprisingly shocking.

Even worse is when she goes to a Martin Luther King dinner. She tells Hoke how she loves how things are changing, but earlier when Boolie suggests she invite Hoke to the King speech she balks, giving Hoke the vaguest hint of an invitation as he drives her to said dinner. Among her shockingly stupid defenses is the idea that Hoke can hear King speak 'anytime he wants'. When Hoke suggests that she was asinine to offer this invitation at the literal last minute she behaves as though she was the injured party. It's almost as if she expected to be thanked for her largess versus recognizing that she was wrong.

I don't think Uhry or director Bruce Beresford were making a commentary about how outwardly liberal whites could be just as prejudiced as the Klan that bombed her synagogue, a sin of omission versus commission. However, it would have been nice if they had explored that a bit deeper.

Her odd assumption that Hoke either goes to the church King preaches at or has some sort of connection to King personally just because both men are black demonstrates to me that Miss Daisy has a particular blind spot.

In short, Miss Daisy shows that she is open to change so long as things don't change for her. She believes in equality for all people, but Hoke should stay in his place. To be fair it may just be that Miss Daisy struggles to see Hoke as anything more than an employee and that her separation is more class/status-based than race-based. Still, something about this did not sit well with me.

Driving Miss Daisy curiously is not as charming as I once remembered it. I can see how well it does work, having seen audience reaction at a theatrical production a few years back. I don't think that the story romanticizes segregation in any way. The film is blessed with a nice style and strong performances from the whole cast, particularly by the triumvirate of Tandy, Freeman and Aykroyd. You do end up liking the characters, flaws and all. I think it is dated and slight, but nowhere near a paean to racism.

Neither as bad as its detractors say or as good as its defenders argue, Driving Miss Daisy is pleasant but flawed as people are.