Perhaps it was too much to place on Tenet, the idea that this particular film would have audiences flocking back to cinemas after the COVID pandemic/panic. There is a difference between "incomprehensible" and "opaque". Tenet is more the latter than the former, though some of the criticisms against it are not without merit.

A figure who eventually adopts the term "The Protagonist" (John David Washington) is part of a military rescue operation at the Kyiv Opera (shades of the 2002 Dubrovka Moscow theater hostage crisis) who finds there's something odd about this mission. The Protagonist finds that contrary to what he thinks, he is not dead but now is part of something larger and more dangerous.

Tenet: a word that leads him, along with his contact Neil (Robert Pattinson) to hop around the world as part of a time-bending plan to destroy the world. In the future, mad Russian oligarch Sator (Kenneth Branagh) has the technology to essentially travel back in time. From our time-forward perspective, things appear to be moving backwards (shots un-fired, people moving backwards) but from the future-past perspective, they are moving forwards as they travel in the past.

The Protagonist must now get close to Sotar's battered wife Kat (Elizabeth Debicki) to stop Sotar's plan to simultaneously trigger and avoid Armageddon by destroying the world, leading to traveling both forwards and backwards in time. 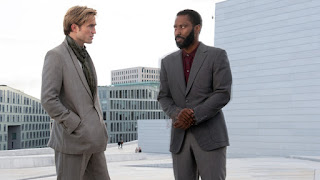 A common complaint against writer/director Christopher Nolan is that when not making more commercial fare (such as the Dark Knight films or Dunkirk) his films can be convoluted bordering on impossible to understand. I don't think that is accurate: there is a logic in a Nolan film, though that logic is at times hard to follow. As I understood it, Tenet has people going forwards and backwards in time, with one group attempting to stop another.

As I said, there's a difference between "incomprehensible" and "opaque". Tenet is not incomprehensible in that if you think on it, you can follow the film. It is closer to opaque in that you feel yourself dropped further and further into a rabbit hole where one is still trying to figure out what happened before before having a chance to figure out what is happening now, let alone how it will all add up by the conclusion.

I would argue that in terms of logic and plot, Tenet should probably be watched twice to see about figuring things out. In terms of other elements, Tenet could have been better. Of particular note is the sound, which has some traditional Nolan muffled voices via masks that can make the following of the story hard if you can't hear it. I didn't think it was that difficult but I can metaphorically hear the complaints as having merit.

The complaint, for lack of a better word, that Tenet is Nolan's sci-fi version of a Bond film also has merit. You have the master villain with some real far-out plot, a beautiful Bond Girl-like figure and a super-agent charging towards a climatic finale. My mind did drift to the idea that stripped of its sci-fi elements Tenet could easily be a Bond film. I also do admit that I did nod off for a bit during the film. 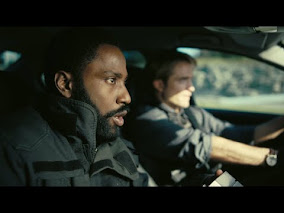 I go back to the 007 comparisons when it comes to the performance. Unlike most Bond films, Tenet plays things more seriously, and the few times Washington is asked to try some quips it sounds forced. Washington is much better when playing things straight, and he is quite strong in the film. He'd make for a good film spy. Washington balances that level of confusion and confidence, though I wonder if giving him such a nondescript term as "The Protagonist" (a title he gives himself) makes him a bit aloof for audinces.

As much as the Twitter attempts to convince me that Robert Pattinson is this generation's Peter O'Toole, some titanic acting force who will be studied by future actors for time and eternity, I am not convinced of it. That's not to say I disliked him: in fact, I think Tenet is the first film where I thought he managed something good. I'm not sold on him but now not almost reflexively hostile.

The clear standout is Debicki, who lifts what could have been a "damsel in distress" role into one that balances Kat's fears with a growing strength. The clear non-standout is Branagh, who seems to have a hard time with accents. He wasn't as menacing as he could have been, probably because the Russian accent veered close to cartoonish.

If there's a flaw in Tenet is that the film is a bit aloof. While everyone is taking this all so seriously there is a remoteness to things. As much as the film wanted me to feel tension I couldn't if the stakes didn't seem or feel real. A major action piece at the airport reminded me of all things the spoof Airplane!, and the lack of emotion with some people equally bordered on spoof. Clémence Posy's Barbara (read, a variation on Q), came across as bored. Here she could see literal time going backward from her perspective and she looked as excited as someone bringing in a ham sandwich.

The other Tenet elements worked well. Ludwig Göransson's score can best be described as "electronic Philip Glass". The action scenes are well-crafted (the opening Kyiv Opera sequence a strong one) and on the whole Tenet is a good film.

Tenet is not a film where you will be totally lost, assuming you manage to stay with it and stay awake.