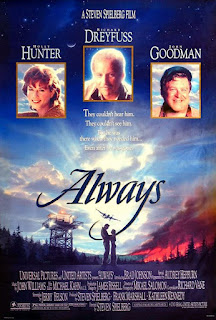 This is part of the Summer Under the Stars Blogathon. Today's star is Audrey Hepburn.

It is curious that in the filmography of Steven Spielberg, there are very few if any genuine romance films. Always is that rare Spielberg romantic fantasy and the first time he remade a film (in this case, the 1943 romance A Guy Called Joe). Always is a film that is trying too hard to be romantic and spiritual, though not without some virtues.

Cocky aerial firefighter Pete Sandich (Richard Dreyfuss) takes wild risks up in the air, much to the dismay of his best friend Al Yackey (John Goodman). Much more irritated is his longsuffering girlfriend Dorinda (Holly Hunter). After she tearfully confesses her fears for him and their relationship, Pete agrees to shift from working in the air to being an instructor.

However, one last flight causes Pete to die, though he saves Al's life in the process. Pete, to his surprise, meets Hap (Audrey Hepburn), a divine figure who tells him that Pete must now go and help a new pilot through Spiritus, the divine breath that is mistaken by the living as inspiration. Time has moved on for those still alive, but Dorinda is still in the midst of grief. Al, reencountering her, pulls her back to the aerial firefighting school that Pete was originally going to go to.

Here, Al and Dorinda meet Ted Baker (Brad Johnson), a hunky, somewhat dim fellow who had fallen in love with Dorinda when he delivered a birthday gift via airplane a year before. To Pete's anger and dismay, he now has to be the spiritual mentor to Ted, both in flight and in love. Hap reminds Pete that anything he does for himself is a waste of spirit, so eventually Pete saves both Dorinda and Ted, at last able to say goodbye to his girl and his boy. 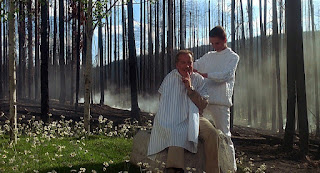 One of the oddities of Always is how the love theme is The Platters' Smoke Gets in Your Eyes when the Irving Berlin standard Always is right there. Prior to seeing Always, I had assumed that Berlin's Always was both the theme song and the source for the film's title. I was therefore quite surprised to not only not hear Always in Always but instead to hear Smoke Gets in Your Eyes.

Nothing against Smoke Gets in Your Eyes, which is a beautiful love song sung beautifully by The Platters. However, the lyrics in Always fit Always perfectly, almost to where you can imagine Spielberg and screenwriter Jerry Belson took inspiration from it. Having Smoke Gets in Your Eyes be the love theme to a film involving firefighting seems either too on the nose or like some kind of bad pun.

Granted, the Always vs. Smoke Gets in Your Eyes debate is one perhaps only I would think of, but I still think it odd. It was to my mind, a lost opportunity. I also think this lack of Always in Always, whatever the ultimate reason, captures why Always did not strike me as much as it was aiming for. The film was aiming for sweeping, romantic and elegiac, but there was a strange stodginess to the proceedings.

Sometimes this mad effort at romance made for strange and unbelievable situations. Take for example an extended sequence at Dorinda's birthday party. When she announces that she will dance only with men with clean hands, the rest of the aerial firefighters slowly rush to the sinks. That moment felt forced and unreal, as if to suggest that Dorinda was literally the only woman around.

Women were treated poorly in Always. Dorinda was forever enduring Pete's arrogance, condescension and sexism, yet always asking for more. To be fair, Holly Hunter was a knockout when she put on Pete's gift of a dress, but nowadays I wonder if that suggests she was somehow not a "real woman" until she fit metaphorically and literally into a dress. Hunter did play her love scenes with Johnson well, though sometimes her grief came across as slightly comical. 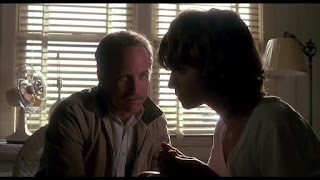 It is not hard to play a love scene with the late Brad Johnson, who was a particularly hunky man. However, he gave a bad performance, forever looking lost and dim. In his defense, the character of Ted was an idiot par excellence, a man so dumb he did not realize that the minor character of mechanic Rachel (Marg Helgenberger) was openly interested in him. When he begins talking about how amazed he was in falling in love at first sight to reveal he is talking about Dorinda and not Rachel, he comes across as an almost cruel idiot. Yes, he is beautiful, but why any woman would want to endure Ted is a mystery.

For that matter, why any woman would endure Pete is a mystery too. For most of Always, his Pete is not someone who would make any woman want him: arrogant, selfish and a bit sexist. However, when he speaks to Dorinda when she can sense something but cannot see him, Dreyfuss does give a good performance here. Goodman was fun and funny as Al, Pete's best friend and Ted's somewhat irascible instructor. However, he was able to show a dramatic side when he scolds the trainees for their failures, a sign that Al does know this is a serious job.

Hepburn, in her final film role, is beautiful as Hap, this divine figure in every sense of the word. Though she has only two scenes, both with Dreyfuss, she has a grace and elegance that hold your attention.

Always made a good effort but failed to make the landing (no pun intended). Perhaps it is good that they did not use the Irving Berlin song here, because it is doubtful that people will be loving this film, not just for an hour, not just for a day, not just for a year, but Always.