The Immortal Story: A Review 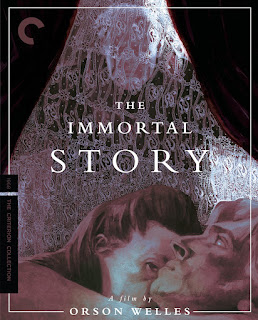 This is part of the Summer Under the Stars Blogathon. Today's star is Orson Welles.

Orson Welles fiercely, perhaps fanatically, resisted color. It is a sign of his almost pathological hatred for color film that it took him twenty-seven years and eleven films before he made his first color film, and that was due only to contractual obligations. The Immortal Story is his first color film, his last feature film made before his death (The Other Side of the Wind completed and released posthumously) and at sixty minutes, his shortest. Touching on themes that dominated Welles' life and career, The Immortal Story is if perhaps a bit too stilted for some viewers still an interesting picture.

Mr. Charles Clay (Welles) is a wealthy but old man in Macao. He claims to dislike stories and prophesies, preferring facts. Nevertheless, he begins to recount a story to his underling Elishama Levinsky (Roger Coggio). It is that of a wealthy old man who pays a handsome young sailor to spend a night with the old man's beautiful young wife to impregnate her.

Learning that Levinsky already knows the story, having heard it many times before, Clay decides it will not be a story, but fact. He will find a handsome young sailor and a beautiful woman to bring the story to life. That way, it will not be just a story but truth, and that sailor can complete this immortal story.

Levinsky is tasked to find the woman, and he finds her in Virginie (Jeanne Moreau), the daughter of Clay's former business partner who ruined him financially, leading to his suicide. Clay finds Paul (Norman Eshley), a handsome young sailor stranded in Macao. As these three begin to live out this tale, they reveal their truths, but part for destinations unknown. Orson Welles was a passionate fan of Isak Dinesen, the pen name of Baroness Karen Blixen. He adapted her short story into a short film, and The Immortal Story shows he was more than able to make a beautiful looking color film. The vibrant reds and soft whites are lush, but the film has more to offer than just visual loveliness.

The Immortal Story seems to encapsulate the many drives of Orson Welles as a filmmaker, particularly that of creating reality out of fiction. Clay, like Welles, wants to make a fictional story true. It is the dream of many an artist, to make something unreal into something real. The Immortal Story as such tackles that theme of bringing fiction to life.

The Immortal Story is a very sparse film. It features only four speaking parts (five if you count Fernando Rey's cameo of a fellow Macao merchant telling others how Clay came to Macao. The sparseness also influences the look, sound and performances in the film. For this being Macao, there are very few people here. Apart from a few Chinese servants and market sellers, this Macao is surprisingly empty. 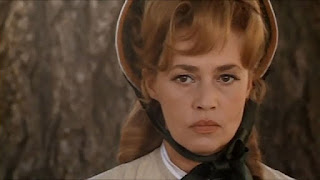 It is reflective of the meditative nature of The Immortal Story, with the limited use of Erik Satie's soft and simple but elegant and elegiac music playing from time to time. The performances too are deliberately muted, as if it was dangerous to speak above whispers. Jeanne Moreau did have a passion and bitterness as Virginie, the wronged woman who now takes this odd revenge.

The standout for me was Coggio as Levinsky, cold and unemotional, who nevertheless leaves a strong impression. Eshley does not leave much of an impression, though to be fair Paul is not a strong character. As Clay, Orson Welles brings a somber, sad manner to his performance. It is of a man who is determined to control others and the world, but who is also lost and unaware that he has no control over the final outcome.

It seems almost too much to say that Mr. Clay is a variation of Mr. Welles, a man who yearned to bring fiction to reality but could not.

The Immortal Story, as I said, may be a bit slow and stilted for some. The slowness may be a surprise given it is a very short film. However, with a quietly strong Jeanne Moreau performance and some beautiful visuals complemented by Satie's music, The Immortal Story is perhaps a fitting end for Orson Welles' cinematic output. This tale of a man attempting to bring to life an oft-told tale and make it true seems to be something Orson Welles would appreciate.