In a time when live-action cartoons and the third remake of a Hollywood story are declared among 'the greatest films ever made', it may be hard to remember when such a term meant more than fanboy hyperbole cranked up to 11. For me, it takes more than squeeing to rank a particular film in that pantheon of true masterpieces.

Lawrence of Arabia, the biopic of Colonel T.E. Lawrence, is one such film. An epic film about one man's soul, with vast vistas and standout performances directed by a titan of cinema, Lawrence of Arabia mixes the sweeping and the intimate in this extraordinary portrait of this most conflicted and contradictory of historic figures.

British soldier and intellectual T.E. Lawrence (Peter O'Toole) is sent by the Arab Bureau to find Prince Faisal (Alec Guinness) and 'find out what his intentions are'. Lawrence, who loves the land and its people but feels himself also a British officer, encounters the formidable Sherif Ali ibn el Karish (Omar Sharif) who has murdered Lawrence's friend and guide for drinking out of his well despite being a member of a different clan. 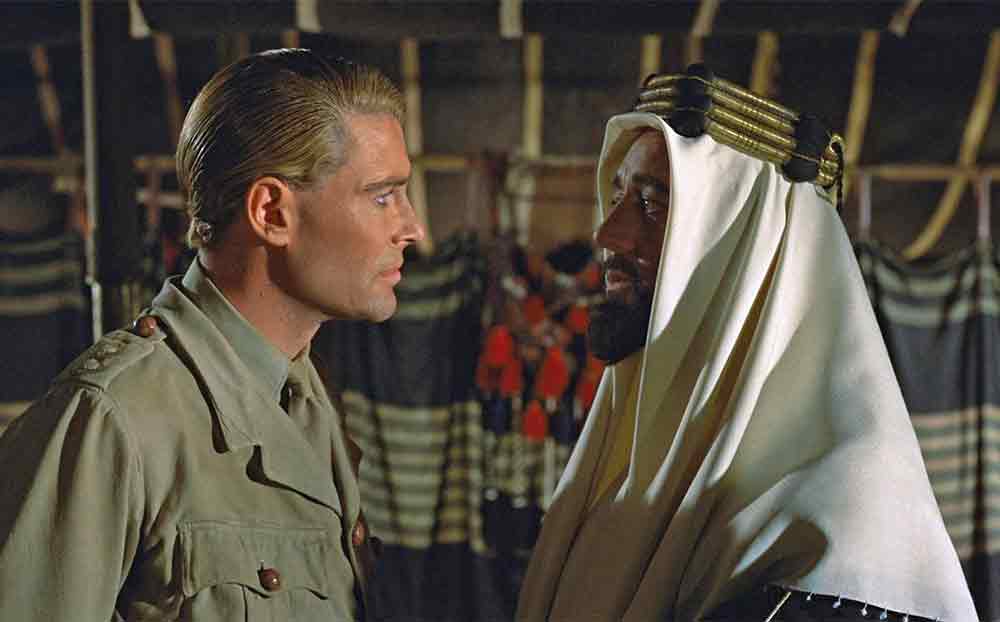 Upon reporting to Faisal's British adviser Colonel Brighton (Anthony Quayle), Lawrence is his usual contrarian self, insisting the Arab uprising should remain independent of British interests in Arabia. He comes up with an audacious plan to aid Faisal's plans: attacking the heavily-defended port city of Aqaba by land. With a very dubious Ali and fifty men going with him, they make a dangerous trek across unforgiving desert before attacking, receiving aid from the bombastic chieftain Auda Abu Tayi (Anthony Quinn).

The British now find themselves facing off against one of their own who in the words of General Allenby (Jack Hawkins) has 'gone native'. Where Lawrence's heart truly are perhaps even he does not know, as he begins to become enveloped by the myth of 'Lawrence of Arabia', helped by ambitious American journalist Jackson Bentley (Arthur Kennedy).

As the Arabs continue their uprising against the Turks and the British continue their machinations on Arabia under the shady dealings of British Arab Bureau head Mr. Dryden (Claude Rains), Lawrence seems two men in one body. It isn't until his torture and perhaps rape at the hands of the Turkish Bey (Jose Ferrer) that Lawrence becomes a whole new man, filled with an almost uncontrollable bloodlust. Eventually, despite Lawrence's efforts he cannot give the Arabs a state or be completely absolved of the duplicity.

Now Colonel Lawrence, he quits Arabia to return to his own native land, a stranger among his own people, destined to 'back into the limelight'.

I have often thought that Lawrence of Arabia is less about war and Lawrence's exploits in the desert than it is about the man himself: where he began and ended versus where his myth began and ended, whether even he knew who or what he was. The key to the ultimate theme in Lawrence of Arabia is when he and one of his two servants finally cross the Suez to arrive at the canal. As this British officer, dressed in once-beautiful but now dirty Arab dress stares out, a motorcyclist comes upon them.

"WHO ARE YOU?" he shouts, and the double meaning packed into that one statement from Robert Bolt and a-then uncredited Michael Wilson's screenplay hits the viewer. Director David Lean (whose voice was the one calling out) moves in on O'Toole's blank expression as he keeps shouting "WHO ARE YOU?" Lawrence does not know who he is and can provide no answer.

Over and over this theme of the man who has no roots, no people, ill-fitting no matter what garb he wears, keeps returning in subtle ways. It may have begun at his birth, when he tells Ali that his father was not married to his mother. Despite Ali's statement that as such he is free to take whatever name he wants and create his own destiny, something in Lawrence always keeps him separate from the people of his birth and the people he has integrated to.

At one point, when forced to kill, he declares to the disparate Arab tribes, "I HAVE NO TRIBE!". While on the surface he means that he can take a life without creating a blood feud, I think it also means that Lawrence is rootless, that he is neither authentically British or authentically Arab in the way his opposites Brighton and Ali are. Both those men fight for what they believe while keeping to their honor without reservation. Lawrence, who flows turbulently between them, cannot fully commit to one or the other.

Lawrence of Arabia is helped by some of the best performances captured for film, starting with a man so breathtakingly beautiful the playwright Noel Coward remarked that if he'd been any prettier the film would have been called Florence of Arabia. While technically not Peter O'Toole's screen debut, I do not think anyone has had a larger or more brilliant opening performance than his. O'Toole, it has been noted, was in a sense wrong for the part in that he was well over half a foot taller than the real Lawrence. I don't think it matters, as O'Toole so brilliantly captured this version of Lawrence, a man forever a bit off-center, brilliant, passionate but also arrogant to the point of reckless.

Lawrence's evolution from a mere officer to a myth partially of his own creation as 'Al Aurence' and back to Lawrence is an extraordinary piece of acting. O'Toole makes Lawrence human in his uneasiness, his oddness and then his shifts to almost mythic status and then to monstrous and ultimately conflicted and tortured physically and emotionally. He starts out as intelligent but a bit clumsy, filled with the arrogance of youth and then slowly becomes a frightening figure, particularly when he leads a massacre of fleeing Turks. His cry of "NO PRISONERS! NO PRISONERS!" is terrifying, filled with fury and emotional turmoil.

Omar Sharif, making his English-language debut after being a star of Arab cinema, is more than O'Toole's equal as Ali, the Arab nobleman in every sense of the word. He too evolves from being a 'little people, a silly people, greedy, barbarous and cruel' into Lawrence's only true friend and conscience. Sharif is the heart of the film: a man with a strong sense of honor, who fights for his people while struggling with a man he has grown to respect, perhaps even love as a brother but who also will take no nonsense from anyone.

I don't think there is a bad performance in Lawrence of Arabia. While perhaps Quinn's bombastic and almost loony Auda may come across as over-the-top, it fits the character of this larger-than-life figure. Quayle's Brighton is a man wholly dedicated to the British manner and perhaps the only honest British officer, a contrast from the wily Allenby as portrayed by Hawkins.

In his all too few scenes, Rains excels as the ever-calm Dryden, forever plotting to further British interests while doing his best to not leave any fingerprints.

Guinness too is excellent as Prince Faisal, even if today his casting would be highly criticized. He makes Faisal into an elegant, sophisticated, calm man, one who dreams of freedom for his people and his own way wily and shrewd, forever attempting to avoid exchanging one master for another. Kennedy's cynical American reporter Bentley (obviously modeled on real-life Lawrence chronicler Lowell Thomas) adds a touch of humor but is also a prism to observe Lawrence. We see this in two scenes where he takes Lawrence's picture.

While relegated to one scene, Jose Ferrer is masterful and chilling as the Turkish Bey, the menace and as open as possible suggestion of homosexual desire so well-captured.

If anything, Lawrence of Arabia is filled with masterful subtlety.

It also has some amazing technical feats, in particular Anne V. Coates' editing. The cut from Lawrence blowing out the match to the sunrise is still breathtakingly brilliant, as is the sequence where we see Lawrence lost in thought until he comes up with one word: Aqaba. It's a credit to both Coates and Lean that despite its massive length Lawrence of Arabia ever feels like it is dragging or padded.

Freddie Young's cinematography is equally brilliant, capturing the wide variety of desert and placing us within that harsh world. Maurice Jarre's score is also a masterful work, blending Western and Arab themes for a memorable soundtrack.

Lawrence of Arabia may not be accurate history but it is brilliant filmmaking. This epic film of one man's conflicted, complex and contradictory soul will stand the test of time long after all the sands of the desert are carried off by the whirlwinds.